Has the Synod Turned a Corner? 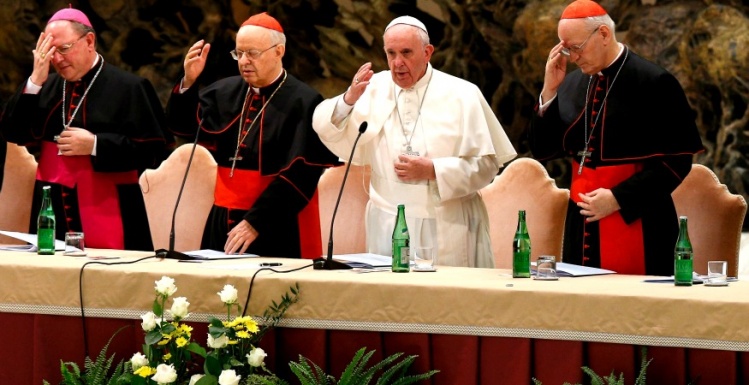 ROME—Hoping to see a resolution to the most neuralgic issues being debated at the Synod of the Family by the time it ends next weekend? Don’t hold your breath. That’s the message that came through during today’s briefing at the Holy See Press Office. While “there is confidence” among the synod fathers that “something can emerge from this process of fermentation,” according to Archbishop Mark Coleridge of Brisbane, Australia, there is no consensus on questions related to Communion for the divorced and remarried, homosexuality, and others living in “irregular relationships.”

That makes it highly unlikely that the final summary document, which synod fathers will vote on—paragraph by paragraph—later this week, will include definitive language on any of the contested issues. That doesn’t mean Pope Francis won’t step in at some point—my money is on a post-synodal study commission—and it certainly doesn’t mean that these three weeks of discernment have been a waste. To the contrary, as Francis made clear in his remarks commemorating the fiftieth anniversary of the synod on Saturday, the synodality established by this meeting of bishops is a preview of what he wants to see from the whole church. “A synodal church is a listening church, aware that listening is more than hearing.” He continued: “It is a reciprocal listening in which each one has something to learn.”

Synoding is hard work—this has been a constant refrain of all the synod fathers who have appeared at the press conferences. And who could doubt it? It’s not unusual for participants to put in twelve-hour days. Coleridge spoke of a sense of “weariness” among the synod fathers. “I have a strong sense that we wonder how we’re going to get through to Sunday morning [when the synod concludes]—how we’re going to write a final document.”

Asked how he would measure the success of the synod, Coleridge said, “I’ve got no crystal ball.” Still, “there is no ground swell of support for the change of church teaching,” he explained. Coleridge referred to an earlier interview in which he speculated that 35 percent of the synod fathers supported finding a way for some divorced and civilly remarried Catholics to receive Communion. But today he admitted that “in fact I have no idea.” He could not recall any synod fathers calling for the church “simply to admit the civilly remarried to Communion,” at least during the large-group discussions he attended. (Of course, I’m not aware of any synod fathers proposing that all divorced and remarried Catholics be permitted to receive Communion en masse.) In Coleridge’s small group, he sensed little support for the so-called penitential path, a proposal that would allow some civilly remarried Catholics to able to receive the Eucharist, depending on their situations and dispositions. “My hunch is that the support for readmission to Communion…is in fact very very modest indeed,” Coleridge said. “The numbers might have even dwindled as the synod has unfolded.”

Does that mean the final synod document will close the door on that issue? I don’t think so, even if at least one synod participant is “far from optimistic about the end of this week.” First, Coleridge was unclear about what he was talking about exactly. Is there modest support for the penitential path or the here-comes-everybody path? And second, it appears that there is more and more talk of considering some “irregular” situations “on a case-by-case basis,” as Beatitude Fouad Twal put it at today’s briefing. What is the point of considering anything on a case-by-case basis—or any other—if there is nothing to decide? Twal, the Latin Patriarch of Jerusalem, also suggested that such considerations could fall to the local church or bishop—another theme that has emerged in recent days, which Pope Francis sharpened on Saturday.

It looks to me like the stage is set for the synod to punt this issue to a study group, perhaps one “spearheaded by the German bishops,” as one report suggests, that will examine the issue in all its complexity, especially with respect to the question of conscience and the internal forum—a subject that has been woefully neglected during the synod. Of course, tomorrow the Holy See Press Office could bring out a few other synod fathers who present a totally different story, but, given recent developments, I tend to doubt that.

Cardinal Gerhard Müller, for example, reportedly would not rule out Communion for the divorced and remarried in “extreme” cases. This is a notably softer line than the one Müller had been taking during and after last year’s Extraordinary Synod on the Family. Last week the German language group—which includes both Cardinal Walter Kasper and Müller—submitted its modifications to the instrumentum laboris. Not a single member disagreed with the report. If the Germans can get (or have already gotten) Müller to sign on to the idea of allowing some divorced and remarried Catholics—however few—to receive Communion, then the synod may have turned a corner on this issue, at least for now.