In play after play, Horton Foote, who died in March at the age of ninety-two, made the quotidian extraordinary. He wrote more than sixty plays, including the Pulitzer Prize-winning The Young Man from Atlanta. He is perhaps most widely known as the Oscar-winning screenwriter of To Kill a Mockingbird and Tender Mercies, and as an Oscar nominee for The Trip to Bountiful, which was based on his play of the same title.

I was so deeply impressed when I encountered his work in the 1980s that I wrote an essay for Commonweal, “Horton Foote’s Many Roads Home” (February 26, 1988). Foote found it satisfyingly accurate, wrote me a kind letter, and we became friends. He expressed enthusiasm for the piece to others, helping it become known well enough that in 2004 I was invited to speak at Baylor University as part of the Horton Foote Festival.

The appeal of Foote’s work begins with its dialogue, which captures the idiom of his homeland, southeast Texas, so precisely and memorably that you come away from his productions expecting everyone to speak that way. He is hilariously funny, achingly sad, always persuasive, and never sentimental. Though he was considered by some to be a goody-goody who recorded only the acts of nice people, that assessment missed the undercurrent of vice and violence present in all his plays.

What requires attention now is Foote’s particular gift for discerning the awesome qualities of ordinary human beings and what awakens awe in them. For example, he is in awe at the insight and courage that allows Elizabeth Vaughn in Courtship, part of Foote’s nine-play Orphans’ Home Cycle, to recognize that the cycle’s protagonist, Horace Robedaux, deemed almost worthless by others, is the good man she wants to marry. But awe did not stop there. Foote was as aware of the mystery of failure as he was of the mystery of virtue. In the cycle, he could no more account for the descent into disaster of Elizabeth’s brother—called, in Southern fashion, Brother Vaughn—than he could for Horace’s success.

Foote loved ordinary people, particularly those rarely celebrated with artistry and sympathy. It was the astonishing resilience such people manifest that aroused in him the greatest awe of all, a perspective that allowed him to present not only their flaws but also what gave them hope, even when they had to confront appalling odds. He did so by avoiding the grandiose “big speeches” in so many plays and movies that attempt to present the “voice of the people.” Instead, his voices are those of real people, shaped by the America in which they actually live.

It is Foote’s unflinching awareness of the real that will ensure his legacy as a playwright who was both subtle and profound. His characters persevere, “go on and on and on,” as they often urge others to do. They overcome failure and disappointment. They deal with the inevitability of death. At the very least, they show us something about getting by, and at their best, they show us how to make a home.

Modesty probably kept Foote from seeing his own life as awe-inspiring, but he was remarkably resilient. He worked steadily right up until his death, and much of his time had to be spent trying to find the money needed to stage his plays as he wanted them staged. So, let us do more than hope—let us demand—that in the future there will be many chances to explore his plays. The process is already at work. This fall the entire Orphans’ Home Cycle, Foote’s masterpiece based on his father’s life, will be presented in repertory in both Hartford and New York. It will be a bountiful feast.

Marian Burkhart, a former college teacher of English, lives in Denver, Colorado. She has just completed a critical study of Horton Foote’s plays. 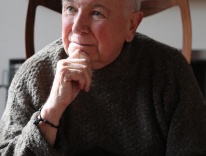 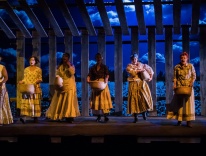