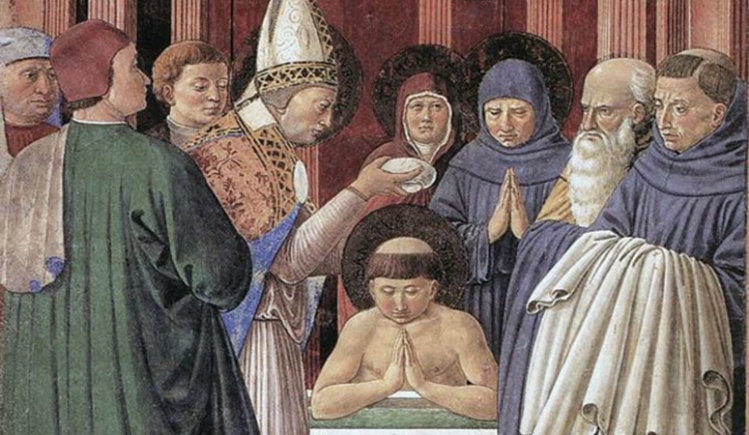 In Luke’s gospel (10: 38–42), we find Mary and Martha, the beloved sisters of Lazarus, hosting Jesus at the family home in Bethany. Jesus is not long for the world, but his death and Resurrection, forecast so bluntly in the previous chapter, casts no obvious shadow over a festive dinner and riveting audience with the Father’s son. Martha is not so happy, however, having to do all the prep and tending work, while younger sister sits rapt at the feet of Jesus, drinking in every word. The last line of Robin Lane Fox’s massive and meandering study of the confessional Augustine, author of “the greatest prayer in Christian literature,” is lovely and evocative: “Marthas in our multiplicity, most of us avoid the Mary within, but some of us know, from Augustine, that there, but for the grace of God, go we.”

Now imagine, as Lane Fox invites us to do, that Martha and Mary are inner dispositions. Your Martha is the part of you that cares for others and keeps you working on yourself, so that one day you too may be worthy of love and life-changing illumination. Your Mary is either beyond or before all that: she is an unselfconscious lover of beauty, drawn ineluctably to the most noticeable portion on offer. The Martha within you may be forgiven for thinking that her complacent inner sibling ought to be helping out more and enjoying less, lest she confuse the most noticeable portion of beauty with the best. But Jesus, having migrated from dinner guest to inner teacher, speaks for a contrary wisdom: “Mary has chosen the better part,” he reminds your anxious and preoccupied self, “and it will not be taken away from her.”

It is fair for us to want the active and contemplative sides of our psyche to be on good speaking terms. A Mary, left to her own devices, has all the charm of a blind appetite, and a Martha, having disowned her sister, is tyranny on the way to despair. And yet there is no way, despite what you may have heard, to find reconciliation in a balance of opposites: even when in balance (and perhaps especially so), opposites still oppose. Jesus does not tell Martha to be a bit more like Mary; he tells her that Mary’s choice is really the only choice, and so the one true necessity. How is Martha, the psyche with plans and ambitions and a closeted desire for pleasure, able to take such a word to heart and not be humiliated?  Lane Fox nicely suggests that some of us Marthas know, by way of Augustine, that grace humbly restores us to a love we never had a prayer of avoiding.

But is this Augustine the same Augustine that Lane Fox has been leisurely introducing to us over the course of the previous 563 pages of the narrative? (And add to that an extensive bibliography and notes.)

I don’t mean to complain (too much) about the length of Augustine: Conversions to Confessions. As Lane Fox points out in his Introduction, there have been “many fine short books on Augustine,” and, not wishing to crowd that field, he has resolved on a long one. Although the reasoning here is not entirely reassuring, the task that Lane Fox has set for himself, with regard to Augustine, does require a certain amount of narrative expansiveness. For roughly half the book, Lane Fox tracks Augustine’s life from birth to his famous conversion in a Milanese garden, using the Confessions for the basic narrative framework. In what follows, the really long slog, he turns to the eleven years that separate convert from confessor and works to reconcile the forty-three-year old bishop, laden with pastoral cares, with the thirty-two-year old convert who forswears sex and seeks otherworldly release. Since it is the writer of the Confessions who is supplying Lane Fox with his portrait of the convert, it is far from clear what confession can add to conversion beyond being a description of it. Lane Fox likens his book to a symphony of two movements, but most symphonies have more than two, and the ones that don’t risk either monotony or incoherence.

In an effort to lend his minimalist symphony greater internal complexity, Lane Fox resorts to the odd device of constantly comparing Augustine to two of his relatively obscure contemporaries, both wholly unknown to him: Libanius of Antioch, a pagan orator, and Synesius of Cyrene, a married Christian bishop. Taken together, the two of them dramatically frame the goods that Augustine, the convert, has definitively renounced: sex and worldly ambition. Switching his simile from music to the visual arts, Lane Fox now encourages us to liken his book to a triptych on a medieval altar, with Augustine occupying the central panel and with Libanius and Synesius looking in on him respectively from the left (disapproving) and from the right (moderately admiring).

This is the picture of a wholly contrived complexity, and it is complexity of the wrong sort. What we need from Lane Fox is a close reading of the Confessions and not a fanciful farming out of some its details to parts less known. What comes back to us from there is neither a two-part symphony nor a triptych, but something akin to a slideshow from a well-traveled and somewhat eccentric “uncle,” one whose enthusiasm has outrun his focus.

BUT THE ROOT problem of Lane Fox’s Augustine is not that its narrative is long and overburdened. A seasoned historian (among other books, he is the author of The Search for Alexander and Pagans and Christians: In the Mediterranean World from the Second Century A.D. to the Conversion of Constantine) should in any case have leave to a take a side trip or two and to speculate on occasion about what might have been the case where the evidence falls short. (Lane Fox has a particularly elegant speculation about Augustine’s composition of the Confessions, placing it squarely in the Lenten season of 397.) The root problem is that Lane Fox boxes himself into a conception of conversion that relegates the Christological logic of Augustine’s confession to what William James would have called “over-belief.”  Once conversion gets cast as essentially a psychological phenomenon, a turn from an old life to a new one, it doesn’t matter deeply how you further describe what gets rejected and what embraced. The psychological dynamics are the same.

Lane Fox’s Augustine doesn’t convert to Christianity; he converts to whatever it is you get to experience when you put your worldly ambition behind you and give up your sex life. When Augustine is eighteen, highly sexed, and newly intoxicated with the delights of Carthage, a young man’s sin city, he comes across the (now lost) Hortensius of Cicero, a rhetor’s exhortation to philosophy. He converts—almost. Based largely on the evidence of a passage from book 8 of the Confessions, Lane Fox has the eighteen-year-old take three morals from the Hortensius to heart: that the pursuit of wisdom is far better than love of worldly gain, that worldliness is to be despised, that sexual satisfaction is a worldly good.

Augustine only almost converts because he can’t quite bring himself to despise sex: “Give me chastity, Lord, but not yet.” Lane Fox sees in Manicheism—a form of Christian Gnosticism—the half-hearted convert’s sanctuary. As a hearer among Manichean adepts, a Martha among Marys, Augustine can labor at chastity and still enjoy sex on the side. The Platonists will, many years later, confirm for him his growing sense that spiritual release is of a different order of goodness than sex. After an agonized bout of self-recrimination over his lingering attachment to the old lusts, Augustine finally yields to a voice of innocence—a child’s call to “take up, and read”—and receives through Paul the requisite words of deliverance: “Put on Jesus Christ, your master, and don’t look to lusts to care for flesh.”

That is, in brief compass, Lanes Fox’s portrait of Augustine’s conversions. It is really only of a single conversion, a perfected shift from one totalizing attachment to another, and the Augustine who confesses to it might as well be as Manichean as Platonist, as Platonist as Christian.

It is true that Augustine never converts to Christianity, but not for the reason that Lane Fox suggests—not because the agent of conversion (some psychological goad) is so indifferent to the way we speak our reverences. Augustine doesn’t convert to Christianity because Christianity is nothing apart from the Christian god, from Christ. I say this not to inject a note of supercilious piety into my review (yes, I too can distinguish Christ from Christendom!), but to suggest that God’s humility matters infinitely more to Augustine than his own, and that we will have no sense of what he is confessing to in the Confessions, where pastor and perfectionist sanely conjoin, until we come to grips with that. Lane Fox continues a venerable tradition of confusing humility with acquiescence to superior power.

Augustine shares in the confusion; he just refuses to sanctify it. I commend Lane Fox to his best line: we Marthas get to the Mary within when we realize that there was never any place to go but there. This is not oneness without otherness; it is the beginning of speech—of confession.

James Wetzel holds the Augustinian Endowed Chair in Philosophy at Villanova University. Among his books are Augustine and the Limits of Virtue and Augustine: A Guide for the Perplexed.