Work in the Fields, Sleep in a Shelter
By Joseph Sorrentino
Web Exclusive 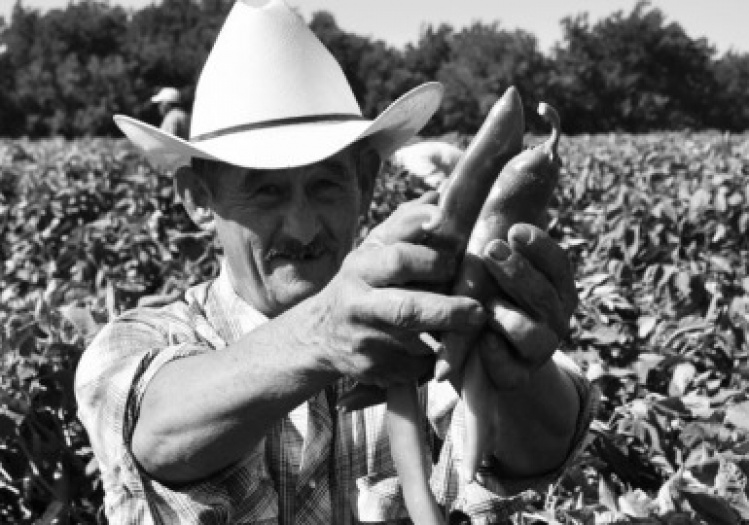 People in New Mexico take their green chile very seriously. Many of them have a separate freezer just for storing chile, and people wait in line at roasters set up across the state. It seems like every city and town has at least one chile festival. Apart from its cultural importance, green chile has become a very valuable commodity. According to the New Mexico Chile Association, about 78,000 tons of chile were harvested in New Mexico in 2012—a crop worth about $65 million. Chile’s worth much more than that by the time it reaches consumers: sold in stores or used in restaurants, turned into salsa and other products, chile generates at least $400 million annually.

The people who pick it, however, barely eke out a living, and some of them can’t even afford their own lodging. Sin Fronteras Organizing Project’s shelter in El Paso, Texas, opened in 1995 to house farmworkers who don’t earn enough to rent an apartment. Carlos Marentes, the founder and co-director of Sin Fronteras, remembers what it was like before they opened the shelter. “People were sleeping in the streets…. Drunk soldiers threw bottles at the sleeping workers. At least here, they get a shower, something to eat.” The sixty-two-year-old Marentes is a quiet man, but he has been a leader in the struggle for farmworker rights for more than thirty years. Contrary to common belief, this struggle is not mainly about the rights of undocumented workers. While almost all the farmworkers in the El Paso area are Mexican, virtually all are here legally and, according to Alicia Marentes, Carlos’s wife and co-director of Sin Fronteras, about 10 percent of them are U.S. citizens.

The shelter can accommodate up to 125 people. A majority are men who stay there to sleep in a crowded main room; a few more are tucked in the narrow hallway outside the bathrooms. A dozen or so sleep upstairs, in a smaller room where bedding is stored on plastic shelves. A few women, generally only two or three, sleep in a tiny room off the reception area. The shelter’s accommodations are, to put it mildly, rough. There are no beds; people sleep on thin mats or blankets spread on the linoleum floor. And there is no privacy. The men’s bathroom has only one functioning urinal. The shelter is crowded, hot, and stuffy. (See photo slide show below.)

But there aren’t many alternatives for these workers. “It’s difficult to get up day after day, sleeping here, my back hurting and go to work but you have to do it,” said Manuel Rocha, a worker from Chihuahua who’s been staying at the shelter for about seven years. “It’s free. I stay here because what [farm work] pays is very little and I can’t afford rent. I have my kids in Mexico, I help my sister, my mother.” Several workers told me there was only one other option. “If there was no shelter, I would probably sleep in the streets on cardboard,” says José Luís Terrazas, a sixty-two-year-old chile picker who has been working in the fields all his adult life.

Workers wake up just past midnight to prepare for another day in the fields. Moving quietly in the dark, they put away their bedding and few possessions, fill their water bottles, and stuff what they need into their backpacks. Then they head out the door and join dozens of other workers—some from El Paso, others from Ciudad Juarez—hoping for another day’s work in the chile fields across the border in New Mexico. People converge near the corner of Father Rahm Avenue and El Paso Street, where they may buy a burrito and coffee at a small stand or a Mexican pastry at the bakery a half-block farther on. They eat the pastries and drink the coffee. The burritos they stuff into their backpacks, saving them for that day’s lunch. Then they sit on a curb or lean against a wall and wait for the contractors, or contratistas, to arrive in buses or vans and tell them whether they’ll have work that day. The workers often wait for hours. “If I don’t get up early, it’s possible that there is no space on the van,” said Susanna Lopez, who stays at the shelter during the week and returns most weekends to her parents’ house in Ciudad Juarez, where her six-year-old daughter also lives.

When they arrive at El Paso Street in the morning, the farmworkers don’t know who they’ll work for that day—or even if they’ll work. There was a stretch of several days in mid-July when rain made the fields too wet to harvest but people still waited for hours in the morning before being told there would be no work. Even when there is work, the chances of being picked by a contractor aren’t always good. The contratistas take some workers and leave others at the curb: “Tu sí, tu no.” “It depends on a lot of things” said Maria Guerrero, who had been working in the fields for only a month. “You gotta know somebody.” If the contratistas know you’re a good worker, it’s likely you’ll get picked again. But if they know you once questioned how much you were paid, or that you filed a grievance with Legal Aid, or that you’re a woman who’s complained about sexual harassment, it’s almost certainly “tu no.”

Usually sometime before three o’clock in the morning, the people picked to work that day file onto buses or vans for the ride to the fields. The buses are free, provided by the farm owner or contratista, but if there’s no bus, workers have to pay between $5 and $8 to ride in vans. The trip from El Paso to Hatch, New Mexico—the “Chile Capital of the World”—is ninety-five miles and takes a little over two hours by bus. Once there, workers wait until it’s light enough to begin picking, which in late July is around six o’clock.

Green chiles grow on low bushes, and workers kneel on the ground to pick them. “It’s wet in the fields,” said Eduardo Martínez. “You’re like a pig and you get all dirty.” Workers are paid by the bucketload—between 65 and 80 cents, depending on the farm and time of year—so they work as quickly as possible. A bucket holds about twenty pounds of chiles. Fast pickers can fill one in three minutes and as many as a hundred in a seven-hour day. But most workers pick less. Once a worker’s bucket is full, he or she carries it to a large crate. For each bucketful, a worker is given a small plastic token to be redeemed at the end of the day. If it’s not too hot, many workers jog to the crate. Even in the cool of the early morning, though, their clothing is soon drenched with sweat. “It is hard work,” said Lopez. “I feel very tired at the end of the day; my calves hurt because you have to run, my arms too because you carry the bucket.” Work is generally finished by one o’clock. “Your back gives out by then,” said a farm owner who asked not to be identified. “Even if you wanted to, you couldn’t work.”

When they’re done, workers count up their tokens and head to the contratista’s van to collect their pay in cash. Guillermo, the fastest picker on one crew, filled ninety buckets, which came to $72 for a little over six hours’ work. Another picker, Raúl, filled only fifty-two buckets, earning just $38.42. But few workers bring even that much money home. “If you can pick seventy, eighty buckets, that’s good,” said Isidro Mancha, who has lived at the shelter on and off for ten years. “I can pick about seventy in a seven-hour shift. Let’s say you pay $6, $7 for a ride. You buy some burritos—that’s another $3. Coke is $1. After all that, you might come home with $20 or $30.”

Sitting on a curb across from the shelter one July afternoon, Eduardo Martínez talked about his life as a farmworker. “It’s not just for yourself,” he said. “You got your wife, your children, you got to send money to them. If someone wants peppers for his dinner, he goes to the store—it’s easy. But in the fields, it’s hard. To pick chiles is the work of a hard man, a strong man. You dream that your children will have something more, that they won’t have to work in the fields, that they’ll have something better. That’s why we work. But in chile production, maybe you take home $28 for six, eight hours."

“Rancheros,” he said, “are the only winners.”

Train of the Unknowns