Another Day, Another Offender 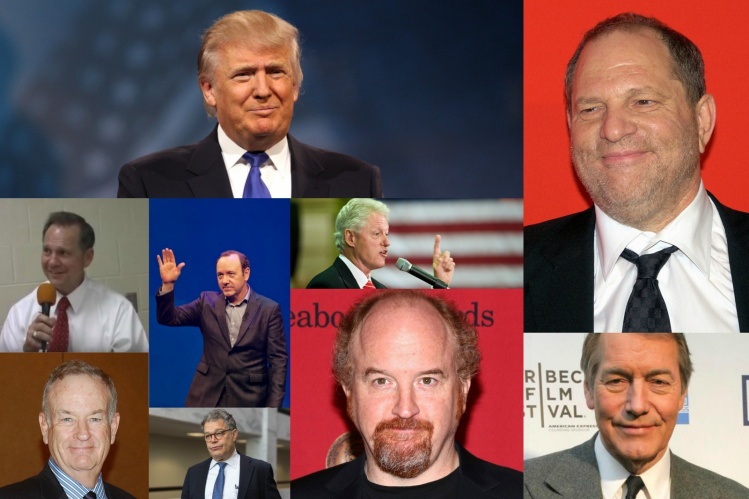 For decades, a woman who’d been offended against could light bonfires of outrage, and no one saw or smelled even a wisp of smoke. Now, all she has to do is hold up a tiny match. Obviously, the viral nature of social media plays a role in spurring these revelations and shamings. It is satisfying to contemplate just how many powerful men are trembling in their Guccis. Yet things can’t continue at this fever pitch indefinitely; inevitably life reverts to some version of business as usual. Once this fire dies down, will a new normal be in place?

Many of my female friends are skeptical, and fear a backlash. But I do think that the behavior of powerful men will be altered—that in the future, all but the most hardened predators will remember how these guys have been toasted, and will step back. The de facto norm will change.

At least, that is, among the visible powerful. But does #metoo work at the local and anonymous level? All these high-flying guys are being brought down, but what about the merely local sleazebag—the manager at Chick Fil-A, say, who grabs his employee’s butt as it if is his right? If you are that guy, and if Mario Lopez isn’t going to be mentioning your name on Entertainment Tonight, disgracing you on national TV, are you still going to change your sleazebag m.o.?

Regarding Bill Clinton, liberals are belatedly agonizing over having so readily dismissed the claims women made against him in the 1990s. My own recollection is that I simply didn’t believe the worst stories about him. As Joe Klein pointed out on NPR the other day, those stories arose in the context of a new hyperpartisanship, driven by intemperate Clinton-hating and expressed in the Whitewater investigation, a fishing expedition sponsored by his enemies with the obvious goal of toppling him. Back then the Clintons were accused of being drug mafiosi, of murdering Vince Foster, and on and on. Amid such lurid accounts—fake news!—was it surprising that rumors of Bill as a rapist would be discounted as fabrications put forth by that “vast right-wing conspiracy” Hillary famously referred to?

For decades, a woman who’d been offended against could light bonfires of outrage, and no one saw or smelled even a wisp of smoke.
sharetweet

But I guess that’s pretty much what Roy Moore’s supporters are saying right now—certainly an uncomfortable recognition for a Clinton defender. For those wanting to revisit the Clinton story, here’s an article from the Times. Then there’s this accusatory piece in The Atlantic, titled Bill Clinton: A Reckoning, by journalist Caitlin Flanagan, who urges us to “not forget the sex crimes of which the younger, stronger Bill Clinton was very credibly accused in the 1990s.” Flanagan recounts the charges leveled by Paula Jones, Kathleen Willey, and most incendiary of all, Juanita Broaddrick, who claimed that Clinton “very violently raped her.” Flanagan continues:

It was a pattern of behavior; it included an alleged violent assault; the women involved had far more credible evidence than many of the most notorious accusations that have come to light in the past five weeks. But Clinton was not left to the swift and pitiless justice that today’s accused men have experienced. Rather, he was rescued by a surprising force: machine feminism. The movement had by then ossified into a partisan operation, and it was willing—eager—to let this friend of the sisterhood enjoy a little droit de seigneur.

A letter from Clinton’s lawyer reminds us that “facts matter” and denies Clinton’s culpability point by point. Yet it’s worth noting that the Lewinsky scandal alone would probably end his career if it came out right now.

What’s clear to me is that when the dust settles, there’s going to be a new bar set for what distinguishes a permanently disqualifying sin from one that you can work your way back from. Where will that bar be set, and how? I think it will necessarily involve making Jesuitical distinctions among gradations of behavior. What constitutes the type and amount of malfeasance necessary to topple a career or a candidacy? Who is the predator, who is the harasser, and who is merely the cad? The gold standard (or maybe we should say, the base-metal standard) is Harvey Weinstein, a serial offender whose offenses quite possibly extend to outright rape. Even if that last charge proves not true, there are other hallmark features of his malfeasance: 1) he had a very particular m.o. that he used over and over again; 2) multiple victims have come forth with corroborating stories; 3) part of his m.o. and the abuse it involved was his blatant wielding of power over his victims.

It’s a spectrum, in other words, with Weinstein’s stone-cold predations at the upper end, and stretching downward to... what, exactly? On CNN the other day, a female anchor told about a guy she worked with years ago, who asked her out a couple of times (she said no). One day she was having a snack with him at work, and as she spread butter on her bagel, he commented that “never before have I ever wanted to be a bagel.” End of story. Does this kind of encounter, in which a guy made a remark that he clearly considered suavely witty but which in fact was awkward and vaguely salacious, rank in any way with the accounts of women being crassly forced into having sex? I don’t think so. Not even close. Oh well. In any salutary movement for justice, there’s inevitably going to be some bandwagon-hopping and moral grandstanding.

In the case of Al Franken, at this point his actions don’t (in my opinion) rise to the career-ending level. This Michelle Goldberg op-ed expresses an authentic sense of quandary among his supporters, one that I share myself. I do shake my head to think that the Senate is actually going to spend time trying to ascertain whether Franken put his hand on a woman’s butt cheek during a photo at the county fair. At the same time, when he says he can’t remember if he did that, I have to ask myself: if I had put my hand on the butt cheek of a stranger, wouldn’t I remember that? Either he’s lying, or he has done this kind of thing so often, and so casually, it all blurs together. Both scenarios are pretty discouraging.

As for Roy Moore, in my view he meets the Weinstein criteria. But what’s most interesting is how effectively he’s serving as a gauge for the vehemence of hard-core Trump voters. Moore’s ability to persist despite the revulsion of establishment media and politicians—indeed, because of that revulsion—replicates in perfect miniature the Trump dynamic, and make him a perfect proxy.

And not only in that way, of course. After all, it is the Grabber-in-Chief in the White House whose crassly boorish behavior and attitudes toward women got this whole thing rolling. In a novel moral conundrum, Trump seems to be escaping censure through sheer unrepentance—as if, somehow, being proud of malfeasance mitigates the malfeasance. But in a convoluted way that I am unable to trace out, his absence from the Hall-of-Shame list has made the movement possible; somehow, he has made it happen.

The Politics of Pronunciation