But Why Should We Believe Them?
By Dominic Preziosi
Economy
Domestic Affairs
Social Justice 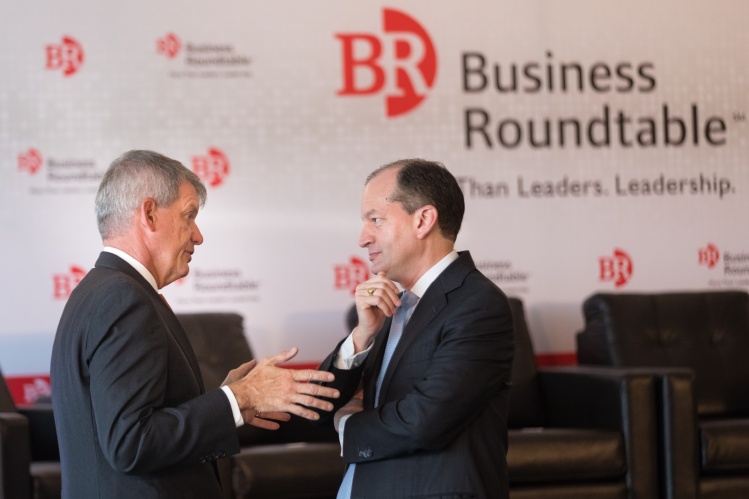 Should we welcome gestures by CEOs of the Business Roundtable to soften their allegiance to the ideology of Milton Friedman? Corporations have long abided by Friedman’s famous declaration that “the one and only” social responsibility of business is to maximize profits. Now, after decades of unapologetically exclusive focus on the bottom line, executives at two hundred of America’s largest companies believe it’s time to consider other “stakeholders” as well, like their employees, their communities—why, even society at large.

If, as Mitt Romney once insisted, corporations are people, then it stands to reason that they wish to be liked, just as actual people do. CEOs have no doubt picked up on the distrust with which the public views their companies, and the new mission statement released by the Roundtable in August seems to acknowledge the zeitgeist. Its signatories pledged to “invest in our employees,” to “compensate them fairly,” and to provide “important benefits.” They promised to “foster inclusion, dignity, and respect.” They vowed to “protect the environment by embracing sustainable practices across our businesses.” They confirmed that they “respect the people in our communities.” The idea of revising the statement came from Roundtable president Jamie Dimon, chairman and CEO of JPMorgan Chase, the nation’s largest bank. The man tapped to draft it—presumably for posterity—was Alex Gorsky, chief executive of Johnson & Johnson, who later admitted in an interview that “there were times when I felt like Thomas Jefferson.”

Just what will companies do to “invest in employees” and “foster inclusion”?
sharetweet

Some of the truths that executives now profess to hold might very well be self-evident. Who, for instance, could take serious issue with their proclamation that “Americans deserve an economy that allows each person to succeed through hard work and creativity and to lead a life of meaning and dignity”? But the canon is thick with cautionary reminders about words without works. Just what will companies do to “invest in employees” and “foster inclusion”? Will they address the scandal of executive compensation (the one hundred highest-paid CEOs make 254 times the salary of workers receiving the median pay at their companies)? Will they show respect for the people in their communities by, say, not inundating them with opioids, contaminating their groundwater, or plundering their personal data? How does the new corporate benevolence square with the push for Donald Trump’s 2017 tax plan, which slashed corporate rates but over time will lead to higher taxes for many middle-class American households?

“I don’t believe what they’re saying for a moment,” Bernie Sanders said of the Roundtable statement, likely speaking for millions. “If they were sincere, they would talk about raising the minimum wage in this country to a living wage, and the need for the rich and powerful to pay their fair share of taxes.” Elizabeth Warren demanded that business leaders “start following through on their words by paying workers more instead of spending billions on stock buybacks.” Those statements may seem merely to echo Sanders and Warren’s campaign messaging, but such skepticism is warranted. Until business leaders turn a collection of blandly worded pledges into meaningful and measurable action—don’t take that to the bank—the statement should be seen for the public-relations ploy that it is. Likewise, free-marketers needn’t worry about executive apostasy: the statement retains clear, familiar language on committing to the creation of “long-term value for shareholders.” In the bullet list of promises, it sits conclusively, and no doubt reassuringly to Wall Street, right there on the bottom line.