‘You Shall Love the Sojourner as Yourself’ 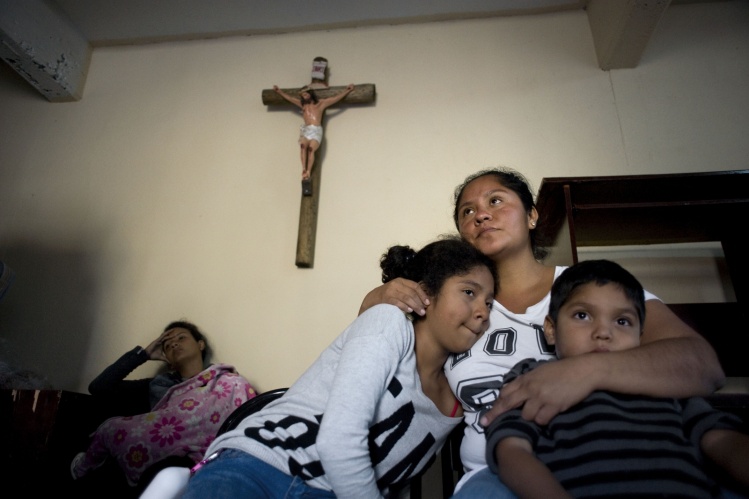 A mother and her two children rest at a Catholic migrant shelter supported by Caritas in Tijuana, Mexico, April 23. (CNS photo/David Maung)

Americans were unrepresented among the 192 countries gathered at the United Nations this week to hold talks with the ambitious aim of creating a Global Compact on Migration. The world managed to move on without the benefit of leadership from President Donald Trump, whose administration refused to participate.

But if the government has shirked responsibility, major religious faiths have not. In particular, the Holy See Mission to the United Nations is deeply involved in the talks, as are Catholic non-governmental organizations such as Caritas Internationalis and Franciscans International.

The goal is to bring broad moral principles to bear on the minutiae of diplomatic negotiation. In an event the Holy See sponsored at the United Nations on May 3, Muslim, Jewish, Orthodox, Buddhist, Protestant, and Catholic clergy members set out some of those principles—and it was stirring to see how each faith approached hospitality for sojourners.

Mohamad Abou Zeid, senior judge in the Family Court of Saida in Lebanon, said that Muslim teaching about migrants in rooted in the migration experience of the Prophet Mohammed and his followers from Mecca to Medina. “Islam teaches us to see immigrants as sent by God,” he said.

The Jewish experience is likewise rooted in migration. Rabbi David Rosen, international director of inter-religious affairs for the American Jewish Committee, made that point as he cited Biblical passages such as Deuteronomy 23:16, “You shall not surrender a serf to his master,” and Leviticus 19:34, “you shall love the sojourner as yourself.”

“Indeed, not for nothing does the history of  Biblical salvation begin with the story of a migrant, Abraham, who leaves his birthplace in Ur of the Chaldees, in today’s Iraq, for a better future for himself and his family and to contribute to a better future for humanity,” Rosen said.

Cardinal Luis Antonio Tagle of Manila, speaking in his role as president of Caritas Internationalis, asserted both a right to migrate and a right not to. The latter is a point being raised by many developing countries: that the Global Compact on Migration should include steps to help ease the social and economic turmoil that leads people to migrate.

“By denying the humanity of a migrant or refugee, we reveal our own lack of humanity,” Tagle said.

The Holy See is a respected voice at the UN—witness the attention that has greeted papal visits dating back to Paul VI—and its diplomats were clearly looking to use that influence in the fourth round of talks on the Global Compact on Migration, held May 14-18. Two more rounds of negotiations are to be held at the UN in New York before a final meeting set for December in Morocco, with the hope that a pact will be adopted on “safe, orderly and regular migration.”

It’s one thing to pronounce broad moral principles based on Scripture and another to translate them into policy specifics, of course. The Vatican has entered that arena as well by circulating its “Twenty Action Points” on migrants and refugees. As one might expect, quite a few points clash with the direction the Trump administration is going.

“Adopt national policies which prefer alternatives to the detention of those seeking access to the territory,” one says. “Adopt national security policies that prioritize the safety and protection of refugees and asylum seekers fleeing armed conflict, persecution or widespread violence to find safety quickly by ensuring an expeditious screening and admission process,” it continues.

And: “Enact laws which expand the scope of family reunification policies to include all family members (including grandparents, siblings and grandchildren) in order to allow the entire family to remain united in the resettlement process.”

Among the areas of concern to the Vatican is to strengthen the commitment to “non-refoulement,” which was defined in the 1951 Geneva Convention as a guarantee that refugees would not be sent to a country where their lives or freedom would be in danger. In the U.S., successive administrations have flouted the rights of asylum seekers.

The Vatican concern is that it’s not always clear how to define a refugee—many who are simply considered migrants are fleeing life-threatening dangers. In addition to a Global Compact on Migration, UN negotiators are working in Geneva on a similar compact on refugees. Too many human beings may fall through the gap between the two compacts.

Another concern is how to treat “irregular,” that is, unauthorized migrants. Should they be entitled to government services such as health and schooling? Through the papal nuncio, Archbishop Bernadito Auza, the Holy See maintains that the compact should “Adopt national policies which respond first to the needs and vulnerabilities of those seeking admission, including access to basic services, before addressing an applicant’s legal status.” In earlier talks, the Vatican backed a proposal by the Philippines (Auza’s native country) and seventeen other countries, including Guatemala, Mexico, Honduras, and El Salvador, to affirm that regardless of legal status, the human rights, safety, and dignity of all migrants needed to be protected.

The focus of the latest talks has been a draft reached in March during the last round, and it seems promising, if subject to much debate. It does include some of the points the Holy See has endorsed, such as using migrant detention only as a last resort, which has certainly not been the case in the United States since passage of a mandatory detention provision in 1996.

It also calls for member nations to “promote fact-based public discourse to shape perceptions of migration.”

On second thought, it may be better to do this without Trump around.