Why U.S. Intervention in Venezuela is a Bad Idea
By The Editors
Foreign Affairs
Economy
Social Justice
Editorial 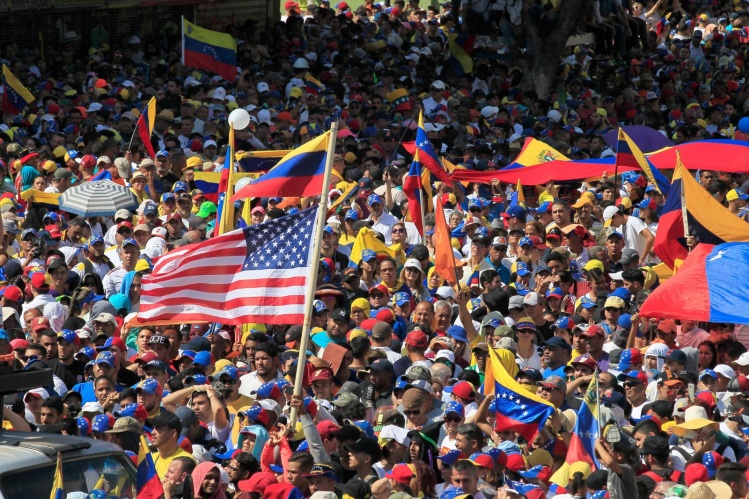 Within minutes of declaring last year’s election fraudulent and naming himself interim president of Venezuela on January 23, national assembly chief Juan Guaidó gained recognition of his government from the United States, Canada, and a number of Central and South American countries. Other countries have since followed suit, including several member states of the European Union. With the backing of more and more ordinary citizens and increasing international support, Guaidó may be able to force a new election in the hope of replacing President Nicolás Maduro, whose incompetence and autocratic policies have plunged the nation into crisis.

The potential change in leadership would come as a welcome development for the millions of Venezuelans who have suffered under Maduro’s rule. Confronted as he took office with a drop in global oil prices that had sunk the Venezuelan economy, Maduro made a bad situation far worse by imposing ill-advised price-control measures and attempting to arrest runaway inflation by simply erasing five zeroes from the nation’s currency. Venezuela now suffers the world’s worst hyperinflation, at 1.3 million percent in the past year. A typical month’s wages buys three cans of Coke. As a consequence, the nation is slowly starving, with adults losing weight on the “Maduro diet” and children succumbing to malnourishment and disease. Protests dominate public life; the government has often met them with violent suppression, arbitrary arrests, and the torture of detainees. Maduro retains the support of the military, and also controls a vigilante-like security force. Human-rights activists have seen their homes raided or have been disappeared. Media outlets that might once have covered these abuses have been shut down. Since the humanitarian catastrophe began in 2014, more than three million Venezuelans have fled to neighboring countries, which are scrambling to manage the influx.

The Venezuelan people deserve a just, democratically elected government responsive to their needs and protective of their rights.
sharetweet

The United States has not helped matters. In response to Maduro’s tactics, in 2014 the Obama administration targeted Venezuela with economic sanctions and cajoled allies into doing the same. Donald Trump’s government has continued this policy. As Joy Gordon wrote in our pages in October, “U.S. sanctions have both worsened the crisis and made it harder for the Venezuelan government to turn the economy around.” The UN Human Rights Council has condemned them as “unilateral coercive measures” in violation of international law. Indeed, the imposition of sanctions looks less like a humanitarian effort to pressure a repressive government than a long-term strategy to undermine the country for ideological reasons—to oppose socialism in our hemisphere and to play power games with our international rivals who support Maduro. The latest round of sanctions is likely to further constrict the economy, inflame international tensions, and bring even more hardship to Venezuelans.

Nor does the team assembled to guide U.S. policy on Venezuela inspire confidence. Elliott Abrams, appointed special envoy in January, has a long history of interfering in Central and South America on behalf of the U.S. government, from securing weapons for a Guatemalan dictator to covering up a massacre of civilians by the Salvadoran military to soliciting funds for the Nicaraguan Contras. The hawkish National Security Adviser John Bolton, following a news conference on Venezuela sanctions, was caught on camera carrying a legal pad on which he had scrawled “5,000 troops to Colombia.” Bolton has bluntly declared that regime change in Venezuela makes for a good business opportunity: “It would make a difference if we could have American companies produce the oil in Venezuela. We both have a lot at stake here.” Republican Senator Marco Rubio of Florida has since the beginning of Trump’s presidency encouraged the administration to demand regime change, and in January 2018 tweeted a call to arms encouraging the Venezuelan military to overthrow Maduro. Trump himself has repeatedly asked what’s stopping the United States from toppling Maduro and has hinted at a “military option.” Such talk is reckless, and it further underscores the administration’s disinclination and inability to engage in skillful diplomacy just when it’s needed most. Many countries—including China, Turkey, and Iran—support Maduro. Russia is especially concerned with preserving Maduro’s presidency; the state-controlled oil company Rosnet has invested $7 billion in Venezuelan oil and stands to lose much if he falls.

Ideally, Maduro will yield to pressure at home and from abroad to call for new elections. The Venezuelan people deserve a just, democratically elected government responsive to their needs and protective of their rights. That government must be seen as legitimate. U.S.-backed regime change, especially if undertaken through military intervention, will guarantee the opposite. Though the United States likes to think of Central and South America as its backyard, it is better that Venezuela’s neighbor to the north refrain from offering the kind of “help” that could bring about an even worse crisis.

A Journey Through Dante's 'Divine Comedy'