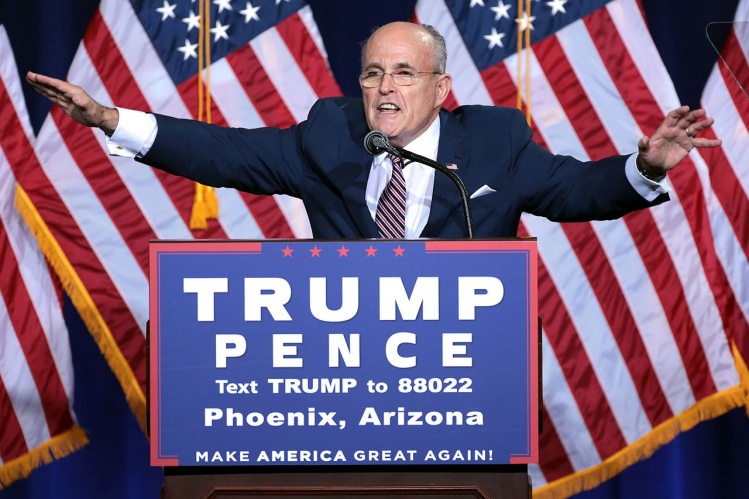 At one time, the accusations were directed against Rudy Giuliani: that he dispatched federal agents who acted like “stormtroopers,” leaked confidential law enforcement information, made prosecutorial decisions based on politics. As a celebrated U.S. Attorney for the Southern District of New York in the 1980s, Giuliani pushed the limits of the law to justify his aggressive prosecutorial tactics. Now, on behalf of his client, the President of the United States, he sounds much like the aggrieved defense lawyers who assailed the methods he once used to prosecute politicians, gangsters and Wall Street traders.

It’s very hard to reconcile the Giuliani I remember from when I covered the Southern District courthouse for much of the 1980s—reporting for The Associated Press and then New York Newsday—with the man who is representing Donald Trump. For now Giuliani is accusing federal authorities of the kinds of transgressions he was accused of.

Much has been said about Giuliani’s latest stroll onto the national stage, so I’ll limit myself to a few recollections from the reporter’s notebook.

Consider Giuliani’s remark about “stormtroopers” that the U.S. attorney’s office—the Manhattan-based office he once headed—sent to search Trump lawyer Michael Cohen’s office. Giuliani also used federal raids for shock value. One black eye on his record was his decision to send agents storming into the offices of three Wall Street executives—Robert Freeman, Richard Wigton, and Timothy Tabor—to arrest them and lead them out, in handcuffs, on a criminal complaint without having enough evidence for an indictment.

Giuliani has been using his credibility as a prosecutor to propagate Trump’s wild charges against the Justice Department and special counsel Robert Mueller, claiming that the probe is out of control. But more than any other prosecutor I’m familiar with, Giuliani was criticized for running roughshod over defendants’ rights.

The legal establishment, including judges, turned against “mega-trials,” his use of broad racketeering and conspiracy charges that linked scores of alleged crimes and huge casts of defendants. Defense lawyers said it was difficult to get a fair trial under those circumstances. In Giuliani’s “Pizza Connection” heroin trafficking case, for example, a pizza man from rural Illinois sat through a seventeen-month trial to face just twenty minutes of evidence. He was convicted along with seventeen other defendants and served his time, nine and a half months. Only later, a three-member appeals court unanimously overturned his conviction and dismissed the charges for lack of evidence.

As U.S. Attorney for the Southern District of New York, Giuliani headed an office with a proud, independent tradition—the “Sovereign District,” as it was dubbed. The prosecutors were talented graduates from the most prestigious law schools—young attorneys like James Comey, whom Giuliani hired in 1987 after he graduated from the University of Chicago Law School. The federal prosecutors had a great deal of credibility with the Southern District judges, many of whom once served in the U.S. attorney’s office. The default position for some judges was to defer to the prosecution—the prosecutors even used to call one very tough judge “Uncle Miltie.”

Gradually, Giuliani overdrew on the bank of credibility that his institution had with the judges.
sharetweet

Gradually, Giuliani overdrew on the bank of credibility that his institution had with the judges. Concerned that the vast publicity Giuliani generated would influence jurors, judges imposed “gag” orders on the lawyers in major trials. When Giuliani tried to recuse Judge Kevin T. Duffy from presiding over the trial of celebrity Bess Myerson, the judge wrote in an opinion that "the United States attorney's motion for my disqualification apparently arises out of my long-established and oft-stated belief that cases should be tried in the courtroom and not in the newspapers.”

Another judge, John E. Sprizzo, directed the acquittal of seven of the fourteen defendants in a heroin trafficking conspiracy case—dubbed “Pizza Connection II”—because prosecutors had charged a larger scheme than they could prove. Sprizzo, a conservative-minded, brilliant, and outspoken judge reminiscent of Antonin Scalia, became increasingly vocal about the direction the U.S. attorney’s office took under Giuliani.

Sprizzo, who had helped defend former U.S. Attorney General John Mitchell in the Watergate scandal and who’d served as assistant chief of the Criminal Division of the U.S. attorney’s office, told government lawyers: “what I am saying to you is that there is in your office—and I notice it not only in this case but in other cases—a kind of overkill, a kind of overzealousness, which is not even, from my viewpoint as a person who has been a prosecutor, rationally related to any legitimate prosecutive objectives.”

Really, Giuliani seems to be the wrong lawyer to challenge a case on the basis of alleged prosecutorial abuses. When it comes to aggressive investigative tactics, he wrote the book.