The Wisdom of the Beguines 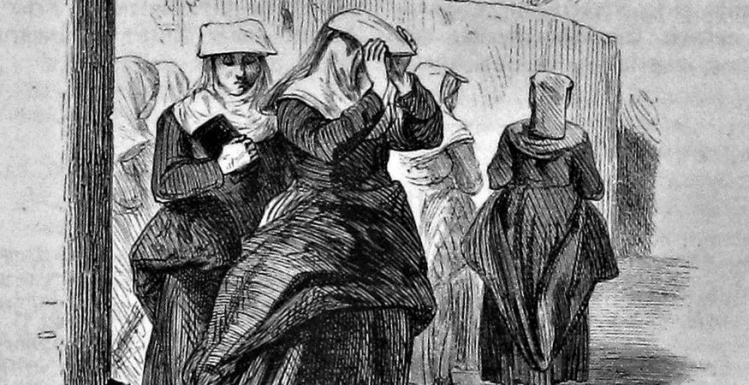 In the twelfth century, single women began moving in large numbers from farms to cities of the Low Countries to work in the textile industry. Many of these women formed communal living arrangements that offered safe, affordable accommodation, and a life of service to their neighbors. According to Laura Swan’s recent book, The Wisdom of the Beguines: The Forgotten Story of a Medieval Women’s Movement, the beguines, who flourished for several hundred years, were one of many lay groups seeking the vita apostolica as a faithful response to spiritual renewal. The beguines are hardly forgotten—they have received a good deal of scholarly attention recently, and a modern ecumenical beguine movement has arisen in Europe—but Swan’s book provides an accessible overview of beguine spirituality in the context of their own times.

The availability of textile work and the establishment of schools by the countesses Joan and Margaret of Flanders helped beguine communities to coalesce, writes Swan. However, it was the beguines’ skill in caring for the poor, the sick, and the dying that earned these women the respect of townspeople, local authorities, and, at first, church leaders. Swan sees the beguines primarily as religious communities with self-governing rules (though not a rule) and a magistra (rather than an abbess or prioress) who served as a leader and spiritual guide. Beguines did not take vows, though many stayed in the beguinage their whole lives; they were free to leave their communities to marry and raise families. As their learning increased, beguines took a lively interest in theology, wrote their own meditations, and even translated Bible stories into the vernacular. They embraced a lively form of worship that involved singing and spontaneous dancing.

Church authorities who had initially supported the beguines began to view them with growing consternation. Women coming and going unattended at all hours of the day and night, claiming to be on missions of mercy? Women debating theological issues like university scholars? Women translating Holy Scripture? All this, says Swan, led to accusations of sexual misconduct or, worse, heresy. To mollify church leaders, beguines found it prudent to make visits in groups or to expand their dwellings to take in patients, the elderly, and school children. Some beguines willingly donned distinctive gray dresses and white hoods so as not to be mistaken for prostitutes. Some agreed to live in enclosed communities or to submit to the supervision of a religious house. Sometimes these concessions were not enough. A few beguines and their works were burned as heretical. It is difficult not to read the accounts of the constraints placed on women beguines by a suspicious male clerical hierarchy and think of those imposed on women by clerics in many faiths today.

Most scholars place the best-known beguine writers—Hadewijch, Mechtilde of Magdeburg, and Marguerite Porete—in the tradition of women medieval mystics. Swan introduces readers to many more beguine mystics and their stories. Beguine mystics reportedly experienced trances, ecstasies, visions, and the stigmata. The twelfth-century beguine Christina the Astonishing was said to have levitated at her own funeral. At the heart of beguine mysticism, says Swan, was a special devotion to Christ as lover and sufferer. The triune God, wrote one beguine, was Lover, Beloved, and Love itself. Some beguines re-enacted Christ’s passion for audiences, realistically recalling his suffering.

Beguine thinking may have influenced notions of purgatory as a process of purification (rather than a place of punishment) that brought sufferers closer to God. Swan traces a special call many beguines felt toward the souls in purgatory, which perhaps grew naturally from their care of the dead. The beguine Agnes Blannbekin, for example, had a vision of purgatory in which there was no punishment at all except the yearning for God. Christina the Astonishing, who claimed to have seen purgatory, wrote that “nothing made God weep more with mercy for sinners than when sinners are moved by mercy toward their neighbors,” presumably including their “neighbors” in purgatory, whose thirst to be with God could be slaked by the merciful prayers of living sinners. Because of the beguines’ devotion to those in purgatory, many citizens left money to the beguinages in exchange for prayers—bequests that sometimes elicited jealousy from the local clerics who found their chantry revenues dwindling. Swan notes that in 1303, Pope Boniface VIII addressed the problem by requiring the beguines to give 25 percent of their death bequests to the parish in which the deceased was born.

In times of interdiction, beguines provided spiritual comfort for their neighbors, and Swan raises the possibility that this comfort led people to wonder—as early Reformation leaders did—whether the sacraments were necessary to salvation, or priests needed as intermediaries with God. While Swan is careful not to suggest that the beguines were in league with Protestant reformers, she notes that some beguine communities embraced Protestantism when it arrived while maintaining friendly relations with Catholic beguines. Interestingly, this ecumenism is a feature of modern communities inspired by the beguines.

Swan’s book does a good job of explaining both the beguines’ spiritual practices and their continuing legacy. Precisely because many beguines left their community to marry and raise families, it is hard to determine the full influence of beguine spirituality. Those who left the beguinage must have passed on their education and knowledge to their daughters, granddaughters, and nieces. It is difficult not to imagine that these women, no less than those who stayed in the beguinage, raised the estimation of women in the eyes of others through their service to the Lord as mothers, helpmeets, and good neighbors.