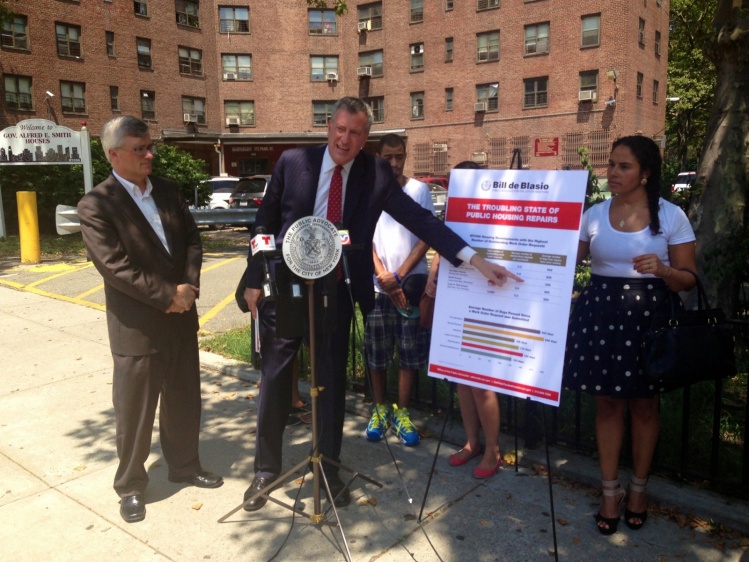 In his book Public Housing That Worked: New York in the Twentieth Century, urban historian Nicholas Dagen Bloom found that the nation’s largest housing authority had succeeded where many others failed because of the excellence of its management practices. Even as housing projects crumbled in many other cities to the point that demolition seemed the only solution, the New York City Housing Authority (NYCHA) was held out as evidence that the New Deal–era dream of creating decent, affordable public housing on a large scale was alive.

Those lingering ideals took what may be a fatal blow on June 11 when federal officials announced a lawsuit and proposed settlement that confirmed how low the nation’s once-model housing authority had fallen. New York City agreed to a consent decree that resolved a devastating set of charges against its Housing Authority, including that it falsely claimed to have conducted inspections for lead paint in a cover-up of conditions that damaged the health of children in public housing. Officialdom came clean on recognizing the extent of NYCHA’s horrendous problems with mold removal, elevator maintenance, the extermination of vermin, and frequent loss of heat and hot water. And New York City agreed to accept a federal monitor to help straighten out its once-acclaimed housing agency, as well as to spend, finally, some real money on public housing.

At a news conference, Geoffrey Berman, the U.S. attorney in Manhattan, and J. Paul Compton, Jr., general counsel for the Department of Housing and Urban Development, put the blame for squalid housing conditions squarely on NYCHA management. “These conditions exist not because of any loss of federal funding but because NYCHA was a dysfunctional operation and is fundamentally flawed and engaged in a culture of false statements and concealment,” Berman said.

There is, of course, no excuse for the lies NYCHA officials handed to HUD and also, as the lawsuit noted, to the public and to New York Daily News reporter Greg Smith, whose coverage has hammered at these problems steadily since 2012. But there is an obvious and significant contributing factor: severe federal budget cuts to public housing. The government’s blindness to its own role in the downward spiral of New York’s public housing is a sign that the privatization of public housing is going to accelerate and become the national norm for HUD policy.

My late father, Bernard Moses, served as director of management for New York’s housing authority in the 1980s—a time when the agency was considered a national model. I asked him, maybe a year or two before his death in 2012, what he thought of the management of the problem-plagued agency at the time, more than two decades after his retirement. “I don’t think anybody could run it with the money they are getting nowadays,” he told me.

The conditions that more than 420,000 residents of New York’s public housing face result from the closely entwined combination of federal budget cuts and chaotic and defensive management
sharetweet

The conditions that more than 420,000 residents of New York’s public housing face result from the closely entwined combination of federal budget cuts and chaotic and defensive management. The system needs the appointment of a competent federal monitor, as the consent decree requires. But to pretend that funding cuts are not a primary cause lets many irresponsible parties off the hook.

Public housing is largely funded by the federal government which, according to a 2014 report co-authored by Victor Bach, a senior housing policy analyst at the Community Service Society of New York, pulled back close to $1 billion in operating support from NYCHA from 2001 to 2013. Another $1 billion in HUD capital funding, which was vitally needed to repair aging projects, was eliminated in the same period. Meanwhile, the state and city also disinvested; the state ended its spending on NYCHA in 1998, leaving the agency to absorb the cost of running fifteen housing projects the state had built. Mayor Michael Bloomberg eliminated the city’s subsidy in 2003 as the city struggled post-9/11 and also made NYCHA pay for community centers the city located in its projects, a cost of $24 million. The George W. Bush administration terminated an anti-drug program that helped fund the payments New York City required its Housing Authority to make for policing.

Bach recalled that the agency faced a $235 million shortfall in 2006 following Bush administration–budget cuts. The solution was to plug the deficit in operating costs with the funds HUD provided to subsidize capital improvements. That’s terrible budgeting—funding operations with capital funds, which are meant for long-term projects, was one of the fiscal gimmicks that led to New York City’s near-bankruptcy in 1975—but HUD, with its own funds being sharply cut, allowed housing authorities to use up to 20 percent of capital allocations that way.

Everyone knew: public housing was desperate. By 2007, NYCHA lost its status at HUD as a “high-performing” housing authority.

Bach added that management was also becoming dispirited. “As of the ’80s and the early ’90s, NYCHA was still public housing that worked. … I think as the funds dried up and things could not be fixed, and staff cuts were made, beginning in 2006 with that huge deficit, there was a decline in sheer morale. The notion that they could do an adequate job was no longer something they prided themselves on. So things ran downhill.”

A person closely familiar with the inner workings of the Housing Authority illustrated how massive budget cuts and poor management decisions mingled to make for tenant misery. In my father’s day, each project (which consists of multiple buildings) would have its own on-site heating plant technician, often a Navy veteran who had experience with shipboard boiler systems. Each project also had its own on-site housing manager.

Many on-site jobs at housing projects were eliminated when funding was cut. Supervision became weaker. Managers often ran groups of projects instead of an individual project, as my father had done for much of his career. Heating plant technicians became responsible for clusters of projects, also rather than just one. That’s all budget-driven, but management decisions aggravated the problem. One policy was to train and promote heating plant technicians from within—a well-intentioned effort to advance NYCHA employees, but it meant having relatively inexperienced technicians maintain now-dilapidated boilers. And these inexperienced technicians were often responsible for multiple projects rather than just one. NYCHA also decided that since managers were no longer on-site at every project, they would not be responsible for the boilers’ functioning, I was told.

That combination—poor funding and vanishing accountability—was behind much human misery. “More than 323,000 residents—80 percent of the entire NYCHA population—suffered heat outages between October 1, 2017, and January 22, 2018, alone,” the federal lawsuit says. “According to NYCHA, the average duration of these outages was 48 hours, a significant increase over the prior year.”

In his 2008 book on twentieth-century public housing in New York, Bloom noted the importance of maintaining a large staff at the agency. “From the beginning NYCHA has imitated the apartment management methods of middle- and upper-class buildings for its poor and working-class populations,” he wrote. “What might have seemed like luxury in other cities, heavily staffed and closely managed low-income projects, seemed less remarkable or controversial in New York because of this multi-family tradition.”

The loss of that staffing, which depended heavily on federal operating funds, has been catastrophic. So has the reduction in capital funding. “Follow the money,” Bloom told me after I asked his reaction to the settlement. “How do you get mold? If you don’t have good roofs or bricks repointed on a regular basis, then you get mold, and you get recurrence.”

Bloom said the settlement is likely to lead to greater privatization of public housing. “I’d say everything is aligned for kind of a shock doctrine … It can’t help but result in a more dramatic shift to the private sector.”

That was evident at the June 11 news conference when HUD’s general counsel faulted NYCHA for not embracing a federal program that encourages partial privatization of public housing. Through the Rental Assistance Demonstration, or RAD, public housing authorities can mortgage land and buildings to private companies, which receive tax breaks to provide subsidized rents through contracts with the federal Section 8 program.

It might make sense to draw on the private sector to come up with some of the $17 billion NYCHA says it needs to repair New York’s public housing, with its 176,000 apartments. (And NYCHA is in fact doing that.) But there is a strong current of opinion in New York that says public housing needs to be protected from the designs of the city’s powerful and property-hungry real estate community if it’s going to stay permanently affordable.

“We have a political solution but I don’t think we have a management solution,” Bloom said of the settlement. “I don’t think it addresses the scale of the issues now faced by NYCHA.”