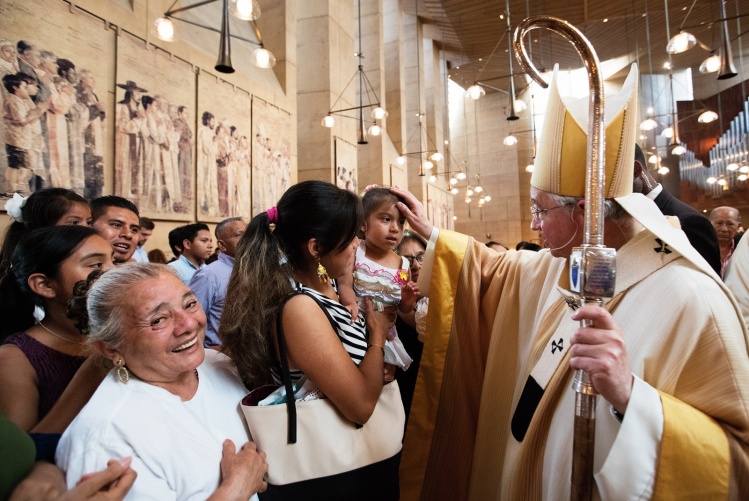 Archbishop Jose H. Gomez of Los Angeles blesses a girl during a special Mass celebrated in 2016 in recognition of all immigrants at the Cathedral of Our Lady of the Angels in Los Angeles. (CNS photo/Victor Aleman, Vida Nueva)

Immigration is an important issue for the U.S. Catholic Church, but it’s not the fundamental concern it was during earlier periods of American history. And yet, the first nativist candidate ever elected to be president of the United States has won office with a majority of the white Catholic vote.

That has disheartened many Catholic immigrants. Donald Kerwin, executive director of the Center for Migration Studies of New York, noted as much at a major Catholic conference on immigration held last November in San Diego. In a summary of the conference, he wrote:

Many participants wondered why their parish priests and bishops had failed to speak in their defense during the election campaign and why so many of their coreligionists were willing, at the very least, to overlook Trump’s slanderous attacks on them. Would any other religious community, they wondered, ignore such consequential threats toward its members?

With some exceptions, Catholic institutions aren’t responding to the current surge of nativism with the urgency that they brought to earlier crackdowns on immigration. Despite that, immigration remains essential to the flourishing of the American church. For just as immigration laws have changed the face of the Catholic Church in America before, the dramatic overhaul being put forward now will do the same. In the long term, it points toward a smaller and less vital church.

The RAISE Act—the so-called Reforming American Immigration for Strong Employment bill—will diminish the size of the Catholic population by cutting deeply into immigration permitted from several heavily Catholic countries. The legislation, embraced by President Donald Trump, would eliminate family-sponsored immigration for all but the spouses and minor children of U.S. citizens and legal permanent residents. The resulting cut in immigration would come heavily from Mexico, the world’s second-largest Catholic country, where four out of five people identify as Catholic.

Some sense of the impact of the RAISE Act on the future of the U.S. Catholic Church can be gleaned from an analysis done by Julia Gelatt for the Migration Policy Institute. It reviewed federal data on people who achieved lawful permanent status—green cards—in the past.

Slightly over 1 million people became lawful permanent residents in fiscal year 2015, and of these, 213,910 benefited from categories of family-sponsored preferences that the RAISE Act would eliminate. Two in five of these newcomers were from three countries: Mexico (41,529) and the Philippines (15,695), which are both about 80 percent Catholic; and the Dominican Republic (26,432), which is majority Catholic.

There isn’t any data on their religious affiliation but, even adjusting for the fact that immigrants skew younger than the general population, the immigrants from these countries would have to be mostly Catholics—certainly far more so than the percentage of Catholics in the U.S. population, about 21 percent.

That migration has kept the Catholic proportion of the population afloat, even as so many baptized Catholics have walked away from the church. Without it, Catholic numbers will drop.

We already got a sense of that during the recession, when economic hardship led to a negative migration of Mexicans, that is, more people leaving than arriving. Mark Gray, senior research associate at Georgetown University’s Center for Applied Research in the Apostolate, said that was a factor in the drop of a percentage point or two in the overall Catholic proportion of the U.S. population.

It’s not just about the numbers, either. Buoyed by a flow of newcomers from Latin America, the growing Latino population is responsible for much of the youthful enthusiasm in today’s American Catholic Church. Studies have found that Latinos constitute 58 percent of Catholics between ages 18 and 34, and two-thirds of those regularly attend Mass. Whether we know it or not, the entire body of the church is relying on them to maintain the faith’s vitality in the United States.

And yet for Catholics devoted to helping immigrants, it’s been a struggle to get the support of fellow Catholics. A Center for Migration Studies survey of Catholic social service and charitable organizations found that they identified lack of community support as their largest obstacle.

“Catholic institutions of all kinds need to stand up and be counted and not run from Catholic teachings on immigrants and refugees,” Kerwin told me. “They need to recognize that we are talking about our co-religionists.”