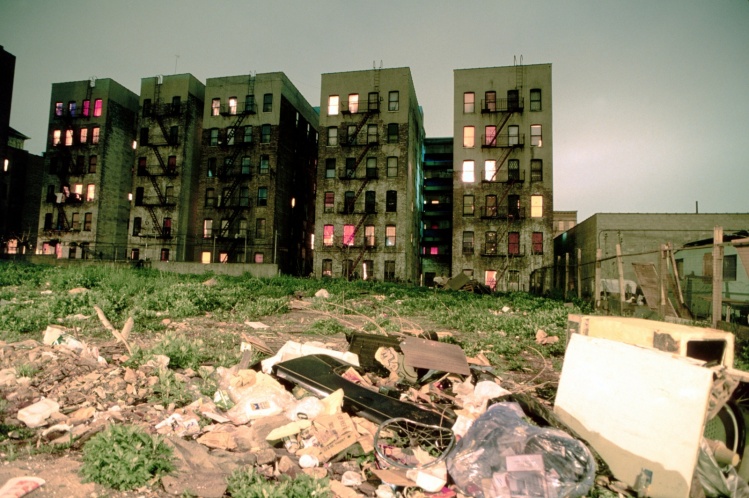 If I stand at Melrose and one-five-six, my back to the big blocked letters of Key Food, my face facing Mama Jo’s community garden and P.S. 29, crouching like a wounded dog (dark and low, silent for the night), I see Jackson Housing, towering seven buildings deep. Its electric lights usurp the stars on this and every other night. If I stand at Melrose and one-five-six, the projects, a wave of brick and mortar, crest over the South Bronx. A Number 6 bus passes as a harsh fluorescent rectangle. Then the Number 41, windows opaque with breath, and I see the face of a man: a dark-skinned profile, angularly lined. An underbite. No hook to the nose. No hat on his head. No crease in his narrow neck. He doesn’t move. The heat of his breath just crawls over the window, and, mixing with the others, blots each passenger out. Consider: within each of those square project windows is, at least, one such face, one such pair of lungs, one such heart—at least—pumping out a living rhythm under all this manufactured urban noise. And I wish Christ had more hands than mine, more feet and words than mine, because all of me is standing backed to a grocery store feeling as small and as fleeting as the vapor of my breath is small and (look!) how fleeting in the cold night air before the swell of humanity confronting me.

And you tell me—you, happy-eyed and blind, tell me—that yes, Christ does have more. Look at all the great programs buttressing the church. You point me toward twenty-something college-campus missionaries, seminarians with peach-fuzzed faces, internet bloggers, vloggers, traces of parish-renewal programs. Go to Manhattan and see hundreds of adults adore Christ on the Upper East Side! Go to the national youth conferences! Enroll in apologetic programs! This is the time of the laity. The New Evangelization and the New Apologetics is all over the new media. Look around! There is so much happening, you say.

Okay, Lord. How do you intend to make your home in that room, or in that one, or that one?
sharetweet

On another corner, in Manhattan this time, at a mid-day hour—projects, again, the backdrop. From a Town & Country stalled in the right lane by a red light, I watch a man holding his jeans at mid-thigh walk his daughter across the street. Her left hand holds his right hand, shades lighter. In her right hand is an orange drink from McDonald’s. His tattoos—intricately inked—climb from a white ribbed tank top up his neck, vanishing into the broad shadow of his backwards flat bill. After making sure she lifts her little foot onto the curbs, under the overpass of the Willis Avenue Bridge, he raises her into his arms and spins. She squeaks like a chipmunk. As they twirl, so swirls around them a sleek, perfect stream of orange drink. Liquid spilling from the plastic straw spirals in wide loops around her little body, falling past his lean shoulders and sagging pants, splashing against the sidewalks. He just keeps spinning. New York City has given me few moments as lovely as this. The light changes green and we speed over the Third Avenue Bridge to evangelize—like everyone else—the other classes.

I stand in the Bronx with my back to Key Food, pointing at one thumbnail window of Jackson Housing, ten from the top and three to the left. I say: Okay, Lord. How, for example, do you intend to make your home in that room, or in that one, or that one? I point to more lit rooms. Or those across the courts, where the eight towers of Melrose Housing rise fourteen stories? Or a block west, where the buttressed, brutalist Air Rights straddles the MetroNorth tracks, a row of pale slabs populating other schools that I cannot see? Again, a bus pushes toward Webster. Fogged up flanks. Inside I watch a woman take a child onto her lap and smear a swath of window for him to see out. I turn my eyes back to that first room. Let’s start there, Lord. How do you get in? Who takes you there? How does your body make its home inside that room?

Br. Joseph Michael Fino, CFR, is a Franciscan Friar of the Renewal living in New York.