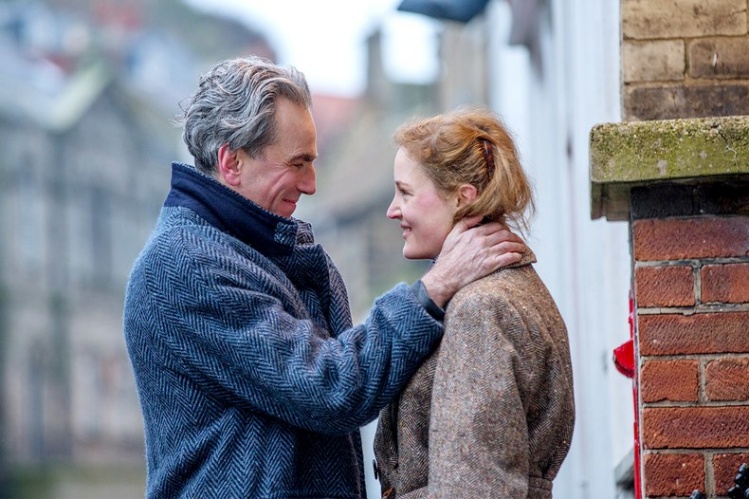 By Laurie Sparham/Courtesy of Focus Features

Paul Thomas Anderson’s Phantom Thread is a painfully beautiful film: the fragile peace of 1950s London, where faded grandeur is haunted by the fresh memory of war; Jonny Greenwood’s magnificent full-orchestra score, which is in turns tremulous and terrifying; the carefully variegated cinematography, which alternates between stable wide shots and jerky tracking shots; and, of course, the sumptuous elegance of Mark Bridges’s costume design, which juxtaposes heavy tweed and lush velvet with the most delicate lace and ethereal satin. The beauty is born of tension between opposing poles, and the viewer has the surreal experience of being simultaneously anesthetized and agitated. This feeling of being stretched in different directions also defines the film’s central relationship, the strange, dark love affair between fastidious master dressmaker Reynolds Woodcock (Daniel Day-Lewis) and his lithe, bewitching muse, Alma (Vicky Krieps).

Day-Lewis’s Woodcock is the consummate artist, utterly devoted to his work and subject to the exigencies of creative inspiration. When he is up, the world is a playground full of color and wonder and romance; when he is down, there is nothing that can be done, no one who can dispel his black mood. This routine is too demanding for most mere mortals, and we quickly learn that Reynolds has a habit of driving away the women in his life. Aside from his steadfast and ruthlessly competent sister Cyril (Leslie Manville, turning in a performance drenched in understated bravura), there seems to be no other living soul to whom Reynolds is close. When we first meet him, he has totally lost interest in his current lover, who complains during breakfast that she can no longer compete with his dresses for his attention. “I cannot begin my day with a confrontation,” Reynolds calmly responds. Reading her brother perfectly, Cyril later suggests dismissing the woman, pronouncing the decisive judgment: “She’s getting fat sitting around waiting for you to fall in love with her again.” Clearly these siblings have been through this before.

Into this carefully maintained ecosystem Alma enters with a bang. Reynolds discovers her waiting tables in a countryside café—she has no elegance, none of Reynolds’s own soft touch, but he immediately sees what she does have: a fierce independence, a feline intelligence, and a certain fighting spirit that he finds fascinating. In turn, though she is initially dazzled by his style and his flair, what she really loves is the knowledge that she is the one who pushes him to realize his full genius. Anderson refuses to make this a shallow tale of physical attraction. Indeed, Reynolds’s interest in Alma is at first nonsexual. When he brings her back to his London atelier he installs her in a separate bedroom. And while they do eventually consummate their relationship, theirs is really a bond on the spiritual level. Alma, at least, knows this. Late in the film when Reynolds has taken ill she tells a bewildered interlocutor that if he dies she will go through countless afterlives to find him again, confident that he will be there waiting for her.

But in the meantime, in the earthly realm, their love remains to be tested. Cyril, whose icy omnipresence in Reynolds’s life comes to be seen less as a form of control than of protection, does not take to Alma, precisely because she sees with unique clarity the effect this new woman has on her brother. His work carries on, of course, but Alma has a way of unchaining his primal instincts. In one of the movie’s most important sequences, she angrily convinces him that a fat, drunken client does not deserve to wear the beautiful dress he has made for her; together they barge into the woman’s hotel suite and steal the garment right off her sleeping body. Anderson plays this off as a triumphant episode, with Reynolds and Alma making a breezy escape into the London night accompanied by a swell of strings and a romantic kiss—but it is rather the start of Reynolds’s final downfall, the moment he allows Alma the permission to turn his love into rage. The potentially hackneyed rivalry between lover and sister is now something much deeper: Whereas Cyril represents the monastic discipline, the serene disinterest required to sustain true greatness, Alma indulges Reynolds’s destructive and (eventually) self-destructive tendencies. Perhaps the fickle flame of artistic invention burns brighter under Alma’s stewardship, but we get the sense it won’t last nearly as long as it would otherwise.

It is not long before Alma realizes that she risks becoming another bit part in the Reynolds Woodcock story—a piece of furniture in the sparsely decorated room that is his heart.
sharetweet

Nor is Alma able to stave off the withering judgments that accompany Reynolds’s imperious moods. Finally, hurt once too much, she takes drastic action that results in his incapacitation. She couldn’t care less about the impact on the business or his art; she’s happy only that she has Reynolds where she wants him: “flat on his back—helpless, tender, open, with only me to help.” Now it is Alma shutting doors in Cyril’s face, rather than the other way around. Now it is Alma mistakenly being referred to by a visiting doctor as “Mrs. Woodcock” (they are not married, but she doesn’t bother correcting him). Now it is Alma who is allowed to see the great artist vulnerable. Reynolds in his weakened state has a vision of his late beloved mother, and indeed it is a mother that he needs at that moment. Living up to her name, Alma becomes alma mater, and, finally, perhaps for the first time in her life, feels the feeling of being needed. Reynolds recuperates and proposes to her: thus mother becomes bride and the pair embarks upon a desperate quest to regain that one moment of clarity.

But can they? The lovers’ old jealousies, insecurities, and weaknesses quickly begin to reassert themselves. In fact, Reynolds and Alma can’t even get through their honeymoon breakfast without rekindling stale grievances—in this case, the way Alma eats too loudly, which causes the exacting Reynolds no end of grief. (Incidentally, the New Yorker food critic Helen Rosner is right that this is a movie as much about food as it is dressmaking: the power games that Alma and Reynolds play against each other mostly unfold across the dining table. In this way Anderson cleverly signals that despite the splendor of couture and the backdrop of extraordinary wealth, his movie is really about the small, domestic drama that fills the everyday.) It is not long before Alma realizes that she risks becoming another bit part in the Reynolds Woodcock story—a piece of furniture in the sparsely decorated room that is his heart.

Emboldened by her previous success, Alma repeats the act that laid Reynolds low the first time, now in a brilliantly shot scene in which he guesses her plot, staring from across the kitchen in disbelief as she proceeds with it anyway. At this point Greenwood’s score positively thunders—timpani and strings soaring to Wagnerian heights—and we are on the edge of our seats in anticipation of the inevitable confrontation. Reynolds stares at Alma dead in the face; for her part, Alma is unshakeable: “You’re not going to die,” she tells him. “You might wish you’re going to die, but you’re not going to. You need to settle down a little.” Reynolds is smiling now, his horror turned to delight at his wife’s mad devotion. Instead of confrontation we get capitulation, collaboration. In the background, a single scratchy violin squeaks out the same melody that had so violently confronted us just moments before. Gleefully and with boyish enthusiasm, Reynolds commands: “Kiss me, my girl, before I’m sick.”

This is a dreadful moment, the film’s darkest by far. Alma reveals that she only knows how to love by violence, while Reynolds makes himself complicit in this absurd simulacrum of devotion. If earlier Alma recklessly encouraged Reynolds to give in to his animal spirit, to think of himself as an inspired Übermensch who only she could tame, here we see the vivid proof that they are really willing to enact this dangerous delusion. Theirs is a love ordered completely to one another, which sounds like a nice thing until we see the extremes it can bring people to. Without an intervening vision, a common hope for the future, love degenerates into a shared solipsism. Here is the perverse Liebestod of Tristan und Isolde in glorious slow-motion: Alma and Reynolds’s love leaves no room for any other, any higher love; they see only each other. The film’s final shot—of Reynolds quietly working on a new dress using Alma as his model, while she stares lovingly back at him—dares us to consider it simply an innocuous or even heartwarming coda. But in reality here is a modern-day version of Dante’s depiction of Paolo and Francesca da Rimini, doomed to swirl around each other for eternity, deaf to true love’s calls to growth and change.

Phantom Thread is, finally, a tragedy. Despite all its beauty and delicate charm, despite its sensitivity to the subtle movements of attraction, despite its precise eye for detail, this is a violent story of interruption and self-immolation. That the film depicts the artistic personality as inherently predisposed to these kinds of excesses may explain why it was passed over for all but one Oscar (costume design). Daniel Day-Lewis, who in addition to playing Reynolds also helped write the script for Phantom Thread, has said this will be his last movie. Maybe he finds himself unable to sustain the tension of creative genius. Maybe he seeks the easy release of surrender. Maybe, if that is the case, he would find in his own film an argument for the artist’s quiet, steady devotion to his craft instead.