When Martyrdom Isn’t a Metaphor 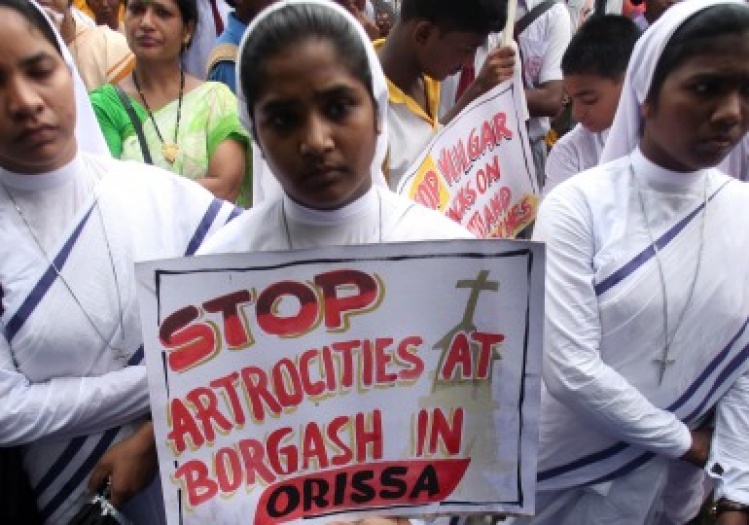 Toward the beginning of The Global War on Christians, John Allen tells the story of a Christmas Day 2011 bombing by the Islamist group Boko Haram that killed forty-five worshippers outside a Catholic church in Madalla, Nigeria. This attack, like so many others that Allen describes in his book, hardly made a blip in U.S. news coverage. Not many Christians in the West are even aware that in Nigeria and many other parts of the world Christians still risk their lives just by going to church to celebrate the birth of Christ.

This is precisely why Allen, a longtime columnist for the National Catholic Reporter recently hired by the Boston Globe, wrote The Global War on Christians—and why he gave the book such a dramatic title. For Christians, Allen writes, “there’s a special obligation” to be concerned about attacks on Christians. Recalling that the Christian community is the body of Christ, Allen quotes Paul: “If one member suffers, all suffer together” (1 Corinthians 12:26). Thus Christians everywhere should know and care about the case of Nadia Ali and her seven children in Egypt, all of whom were sentenced to fifteen years in prison for converting to Christianity (the faith in which Nadia had been raised). They should also care about the fifty-eight Christians who were gunned down during Mass at a Syrian Catholic church in Baghdad in October 2010; about attacks on Christians in India by Hindu fundamentalists; and about the rising anti-Christian violence in Pakistan. (On September 22, 2013—soon after the publication of Allen’s book—a church bombing in Pakistan killed seventy-eight people.)

Perhaps it is Allen’s frustration that most Christians in the West don’t even know about these incidents that causes him to employ such dramatic language. He describes anti-Christian persecution as a “war” and an “ecumenical scourge,” insists that Christians are the “most persecuted religious body on the planet,” and styles the “war” against them “the greatest story never told.”

All of this contrasts with Candida Moss’s The Myth of Persecution, which implies that Christians already care too much about stories of anti-Christian violence—and indeed that many such stories are fabricated or exaggerated (see Luke Timothy Johnson’s review, “Prosecuting the Persecuted,” August 5, 2013). While most of Moss’s attention is on the early church, she begins her work by discussing a 2011 New Year’s Eve bombing of a Coptic church in Alexandria, Egypt, which left more than twenty people dead. Moss is less interested with the victims of the bombing than with the way Christians declared the victims martyrs and insisted that Islamist groups had been responsible.

Allen discusses the same bombing and explains that the attack was a response to false rumors that two Christian women who had converted to Islam were being held by the Coptic church against their will. Allen notes that this incident was but one in a long series of Islamist attacks on Egyptian Christians in recent years. In Egypt, mosques can be built freely, but special permits are needed to build churches. Attacks often take place after Islamists accuse Christians of attempting to build a church without such a permit. Sometimes attacks are inspired by the accusation that a Christian man is sleeping with a Muslim woman and compromising the honor of her family. (In Egypt, as in most Islamic countries, Muslim men can marry Christian women, but Christian men cannot marry Muslim women.) In other words, Christians in Egypt—and in much of the Islamic world—regularly face obstacles and threats that are unimaginable in the West. And yet Christians in the West have done little to support them.

According to Allen, one reason Christians in the West have not done more is that the question of anti-Christian persecution is easily politicized: “In the post-9/11 era, anti-Christian violence by Muslims is a terrific rallying cry for hawks on the American right, which may help explain why some liberals remain skittish.” Allen replies that “if we want to see the global war on Christians clearly, we have to stop looking at it through the funhouse mirror of secular politics.” Perhaps it is his concern to connect with readers of various political persuasions that leads Allen to define anti-Christian persecution so broadly. As he defines the term, the “war on Christians” includes not only attacks against Christians by terrorist groups and the anti-Christian policies of governments that forbid or restrict public expressions of Christian faith. It seems to include any incident in which Christians are victims, even when they have not been targeted because of their faith. If a Christian pastor of Muslim background, jailed for his apostasy by Islamic courts in Iran, is a victim of the “global war on Christians,” so too, in Allen’s view, is a priest in the Philippines who is shot for his political activism on behalf of the anti-mining movement. The war on Christians, so defined, exists not only where Christians are the minority, but also in countries—such as the Philippines (or Zimbabwe or Mexico or, indeed, the United States)—where they are the majority. This broad definition of the “global war” on Christians makes it seem like something other than a war. But Allen argues that the motives of the victim should matter at least as much as the motives of the attacker: “We also have to ponder what was in the heart of the believer getting shot.”

This approach helps Allen avoid an exclusive focus on Islam. In a chapter titled “The Myth That It’s All About Islam,” he comments that a narrow focus on Islam would contribute to the idea of a clash of civilizations between Islam and the West. He also notes that many Muslims have been faithful defenders of Christians. As an example, he tells the moving story of Mahamud Osman, the Muslim driver of an Italian nun, Rosa Sgorbati, in Somalia. When Islamists shot at Sgorbati—apparently in reaction to Pope Benedict XVI’s September 2006 speech at Regensburg—Osman jumped in front of Sgorbati to protect her. Later that day, Sgorbati and Osman both died of their wounds in a Mogadishu hospital.

Such stories are inspiring and deserve to be told more often. Yet one cannot easily sidestep the problem of Islamic anti-Christian persecution. As Allen notes, while the first country in the Open Doors World Watch List of places where anti-Christian persecution is most severe is North Korea, every other country in the top ten is Islamic. And while there are many stories of Muslims protecting Christians (and many stories of Muslims also suffering from Islamist extremism), it is nevertheless true that Christians living in the Islamic countries regularly face threats. In many of these countries, Muslims who convert to Christianity live in fear for their lives. Christians can be imprisoned for proselytizing and executed for an accusation of blasphemy against Islam. In many Islamic countries, including some with officially secular governments, radical Islamist groups adopt and spread an ideology that encourages discrimination against, or vigilante attacks on, Christians.

Allen recognizes the problem of Islamic anti-Christian persecution, and insists that it should not be ignored. He writes, “Politically correct silence does no one any good.” At the same time, the manner in which Allen groups together all sorts of things into one great “global war” on Christians doesn’t appear to do justice to the particular situation of Christians in the Islamic world. The struggles of American Catholic business owners who have to decide what to do about the HHS contraception mandate shouldn’t be conflated with the struggles of Iraqi Christians who pray each Sunday that a bomb won’t explode during Mass. Moreover, if the “global war” involves any and every case where Christians face trouble, it’s hard to imagine what exactly can be done about it. Movements like the one against apartheid in South Africa—or like the ones against anti-Dalit discrimination in India or anti-Roma discrimination in Europe—have been meaningful, and sometimes successful, because they have focused on a specific category of persecution, in which the persecuted and the persecuting are both clearly identified groups.

On the other hand, Allen succeeds admirably in raising awareness of the suffering of Christians who are too often forgotten in the West—such as the seven members of a poor family in Gojra, Pakistan, who were burned alive in 2009 by a mob of Islamists who accused their Christian settlement of burning a leaf of the Qur’an. No one was there to protect this family or their community. No prosecution of the perpetrators ever took place, and hardly a word of protest or lament was heard in the West. Indeed, the fate of this family was almost completely unknown in the West, until now.