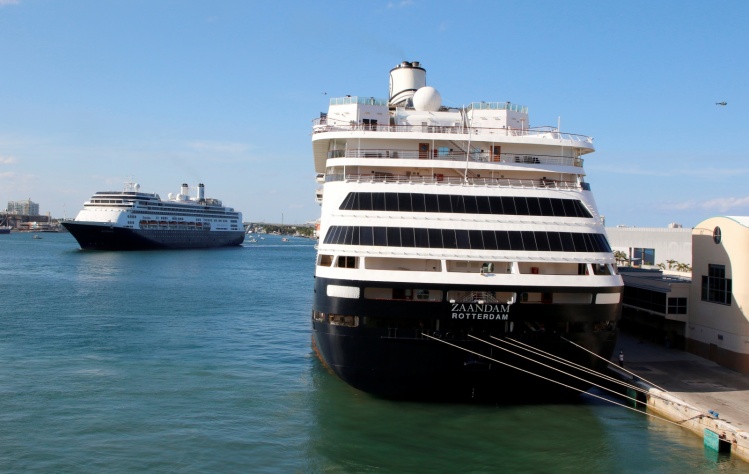 The plight of passengers aboard the cruise ship MS Zaandam has been one of the more poignant stories of the pandemic. The coronavirus began to spread after the ship left Buenos Aires on March 7 for a cruise around the southern tip of South America. It held 1,243 passengers and 586 crew. Eventually, hundreds of “guests” and crew members were most likely infected, and four “older” passengers died. After a March 21 stop in Punta Arenas in southern Chile, all ports in Latin America were closed to the ship. It was briefly denied entrance to the Panama Canal but was eventually allowed through after more than eight hundred Zaandam passengers were transferred to the MS Rotterdam, another ship from the Holland America line.

The Zaandam then headed to Fort Lauderdale, Florida, its home port. At first Florida Governor Ron DeSantis refused to let passengers disembark. That was predictably clueless: this is, after all, a governor who refused to close Florida’s beaches as the pandemic spread. But after President Trump expressed sympathy for those onboard, DeSantis relented, allowing passengers to leave the ship, where they had been confined to their rooms for ten days during the nearly three-week-long ordeal at sea. Fourteen were hospitalized, and everyone was screened by paramedics after leaving the ship. Most were then bused to the local airport for charter flights to homes across the United States, Canada, and Europe. Roughly fifty passengers were from Florida itself, a fact DeSantis cited in explaining his change of mind. Evidently, all politics remains local. Fourteen days of self-quarantine were to follow for everyone. None of the crew members were allowed onshore.

I spent about fifteen minutes in the casino playing blackjack and was constantly reprimanded for absent-mindedly touching my cards. I didn’t go back.
sharetweet

It is not hard to imagine the desperation of people who find themselves stuck at sea in close quarters while a plague sweeps through a ship, especially a disease older people are more vulnerable to. Many “cruisers,” as they like to call themselves, are senior citizens. As it happens, I have a good idea of what it must have been like, because I was a passenger on the Zaandam for a ten-day Caribbean cruise back in the fall of 2001. The Zaandam I boarded in Fort Lauderdale had only been commissioned the year before, and was outfitted with the most up-to-date “cruising” bells and whistles, including two swimming pools, a casino, a sports bar, a gym, a (small) library, a sizable theater, and much more. The ship is enormous, nearly eight hundred feet long, with nine decks. Most of the cabins are relatively small, about fifteen by eighteen feet. But the food, as one would expect on a cruise ship, was as mountainous as the vessel itself.

I made my voyage thanks to an invitation from Rand Cooper, Commonweal’s indefatigable film critic and contributing editor. Back in those pre-Trumpian days, Rand was a regular contributor to food and travel magazines. Our passage on the Zaandam was at the behest of Islands magazine, a glossy coffee-table read known for its lavish photo spreads. Since Rand’s assignments usually came with accommodations for two, he often took friends along on those adventures. It was a working vacation for him, a lark for me.

The ship made brief stops in Curaçao, Venezuela, Trinidad, Martinique, and St. Thomas. If memory serves, Martinique was the most beautiful, Curaçao and Trinidad the grittiest. Not that we were exposed to much grit anywhere. I don’t think we spent more than a day on land in any one spot. You are herded on and off the ship with little ceremony. It is the time passengers spend on board—shopping in the stores, gambling in the casino, and attending the shows—where Holland America makes its money. I spent about fifteen minutes in the casino playing blackjack and was constantly reprimanded for absent-mindedly touching my cards. I didn’t go back.

In Venezuela we were bused to Caracas, which is in the mountains. Since the road to the capital is built on the edge of steep ravines and the bus driver liked going fast, the trip was harrowing. The contrast between Caracas’s crowded barrios and affluent neighborhoods was even more harrowing. It was not the sort of place you wanted to explore on your own. Entering the city, we drove past a large cemetery. It was thronged with families who appeared to be picnicking, something one never sees in America. I was momentarily confused. Why, I wondered, were people gathering in the city’s graveyards? Then it dawned on me. It was November 2, All Soul’s Day. Venezuelans were paying their respects to the dead.

Those acts of devotion struck me as a profoundly civilized thing to do. It is often observed that the fact of death is usually hidden from Americans. Death often occurs in hospitals or hospices, and bodies are tended to by professionals, not family members. The pandemic has brought death back into the open, onto our streets and into the corridors of hospitals and the makeshift morgues of refrigerated trailers lined up in parking lots. Mass death makes its somewhat surreal appearance daily on our TV screens and phones. It is a daunting and nightmarish turn of events. Like the plight of those on the Zaandam, most Americans now find themselves at sea and restricted to quarters, unable to disembark until the pathogen is contained.

When we do get released from our current confinement, it might be good to take up the All Souls Day rituals practiced by so many Venezuelans. Keeping the dead in one’s heart is made easier when one can touch something they left behind, or the stone inscribed with their name marking their resting place. There is a real efficacy in such practices. Preaching on the feast of All Saints and All Souls, the theologian Karl Rahner sought to make sense of the felt absence of the dead in our lives and the seeming silence of God. “That is the way it is. For God is silent, just like the dead,” he wrote. “For us to celebrate his feasts in our hearts this silent God must certainly be with us, even though he seems so distant and so silent. We certainly must love him, too, as we love our dead, the distant and silent dead, who have entered into the night…. And that is why we cannot lament the silence of the dead, for their silence is only an echo of his silence.” It is a silence that can speak to us when we remember those who have fallen asleep in the Lord.

Anthropology with a Difference