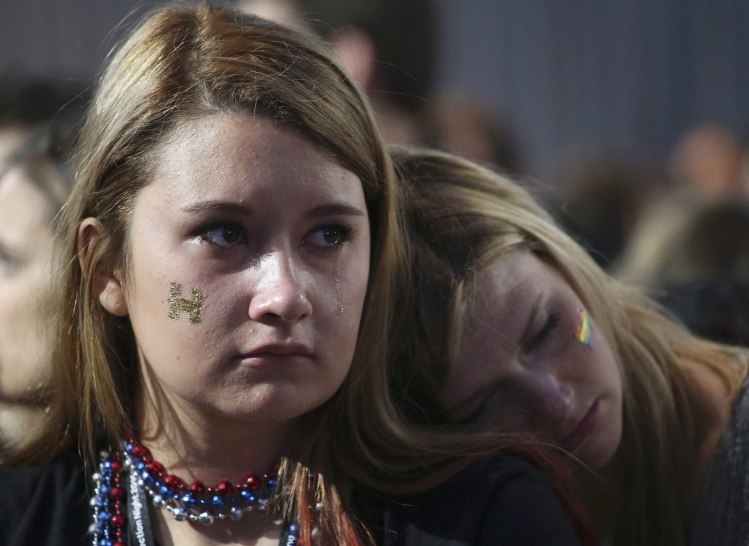 A supporter of Democratic presidential nominee Hillary Clinton reacts to the news that Donald J. Trump won the election in the early morning hours of Nov. 9. (CNS photo/Adrees Latif, Reuters)

If Hillary Clinton had been elected president, what would the authors of Shattered: Inside Hillary Clinton’s Doomed Campaign have done with the trove of data, gossip, leaks, interviews, and speculations they had amassed during the 2016 presidential campaign? Would they have called it: Amazing: How a Campaign Riven by “Too Many Cooks,” Second-guessing, Conflicting Strategies, and Personal Animosities Elected Hillary Clinton President of the United States?

That could have happened. Jonathan Allen and Amie Parnes began their reporting in 2014 sharing the assumption that Clinton was the likely winner. If they had thoughts of using “shattered” in their title, it referred to the proverbial glass ceiling, not shock and despair over a Clinton loss. At what point then, were they persuaded otherwise and begin to frame the campaign a disaster and Clinton the loser? Or, were they as surprised as the whole country by Donald Trump’s victory, and decided on November 9 to describe the campaign as “doomed”?

As Clinton moved from her 2015 “listening tour” to Election Day 2016, the authors hung their story on three themes: (1) the candidate lacked political charisma; (2) the campaign was ruled by “science rather than the art of politics”; (3) a string of unexpected events reminded voters that they didn’t trust Hillary Clinton.

(1) Clinton’s loss to Barack Obama in 2008 didn’t quell her presidential ambitions. She played the good sport, campaigning for Obama, joining his administration as secretary of state, and looking ahead to following him in office. The rallying cry of the super PAC, Ready for Hillary,” pinned down donors and edged out the plans of serious competitors, though Bernie Sanders’s entry in April 2015 undid that presumption. Analyzing the errors of 2008, her own and others, Clinton devised rules that governed the 2016 campaign—for example, don’t fire anyone. In 2008, unhappy former staffers leaked to the media, a mortal sin and personal affront for Clinton. In this campaign, doubtful performers were kept on but elbowed aside while new staff, advisers, and consultants were added. Layering over problems of strategy and staffing created multiple power circles, with concomitant confusion and resentments piling up among staff while major donors, long-time friends, and Bill Clinton rained a stream of criticisms on the worker bees. Hillary’s wonkishness overwhelmed what little political sensibility she possessed, leaving to a loose group of friends and speechwriters the task of providing the themes, words, and appeals she offered the voters. In any case, the no-leaking rule was violated. The authors promised anonymity and assured willing talkers that nothing would be published before the election.

(2) Even though campaigns are transient enterprises, like pop-up stores, their many moving parts require constant attention and adjustment: fund-raising, polling, staffing, scheduling, speech-writing, TV ads, robo calls, and get-out-the-vote efforts. The effort must be up and running in fifty states for the twelve to fifteen months preceding the primaries and in full force in the two to three months between the convention and election day. Initially without serious competition, Clinton expected to sail through the primaries, a trajectory derailed in March by Sanders’s surge in the Michigan primary. Clinton campaign manager Robby Mook’s strategy for the primaries had been directed at clinching an overwhelming delegate count. That meant allocating money and staff even to states unlikely to support a Democrat in the general election.

Yet once the convention is over, appeals must be made not to delegates but to the general electorate, especially in states where the Democrat was likely to win—say, Pennsylvania, Michigan, and Wisconsin. Shattered is not clarifying on the trade-offs between resources devoted to the primaries and later to the election. The authors describe Mook’s approach as science vs. politics, analytics vs. ground game. The ground game is the traditional organizing of local forces in an effort to persuade all voters and then to get out those likely to vote for your candidate. In contrast, analytics pays less attention to actual voters and persuasion. Instead, it plumbs demographic data, polling, statistics, and public records using an algorithm to identify the candidate’s likely voters by gender, race, age, religion, and education. Calling this “so-called science,” or perhaps “alchemy,” might better describe the process, or at least Mook’s version of it. His approach angered actual politicians, like Bill Clinton, campaign chair John Podesta, and Democratic officials in states getting short shrift in this analytic lottery. Think again of Pennsylvania, Michigan, and Wisconsin.

(3) Clinton’s path to the presidency was disrupted by several unexpected events. The ongoing, hostile congressional investigation into her use, while secretary of state, of a private e-mail server became public in March 2015. This dogged the campaign through James Comey’s July 5, 2016, announcement that Clinton would not be prosecuted for using her private server to send classified material. At the same time, of course, Comey accused her of being extremely careless. Just before the election, Comey again intervened, informing Congress that Clinton e-mails found on a laptop seized from Anthony Wiener in a criminal investigation required vetting. That these emails turned out to be duplicates of emails Comey had already examined did nothing to quell the reminder that Clinton had been careless. Finally, Wikileaks’ release of Podesta’s and DNC e-mails, full of gossip and sharp repartee, added to the distraction. Whether these were released at the behest of Russian intelligence remains an open question. Although they had nothing to do with the campaign as such, these interventions—whether accidental, fateful, or even malevolent—nonetheless evoked the voters’ sense that Clinton was untrustworthy and self-protective.

The authors interlard these three themes with tales of imprudent decisions as well as paralyzing indecision, and examples of Hillary’s stiff public persona. For all of this, and to the degree that their account rests on gossip, exaggerations, and a few lies, political junkies will read Shattered with an interested but skeptical mind. The fog of a campaign, like the fog of war, offers up multiple twists and turns as possibly explanatory, but they are no more illuminating than the larger fog of the campaign that elected Donald Trump.

Political campaigns suffer from heightened expectations, gossip, mistakes, and human folly; Clinton’s 2016 campaign was no exception. Did Bernie Sanders and Donald Trump run better campaigns, the one because he spooked Clinton and the other because he won the Electoral College? Those campaigns were also chaotic and beset by miscalculations, animosities, and gossip. It was not her campaign that doomed Clinton; it was the eighty-thousand voters who stayed home in three critical states.

Gazillionaires gather and focus their bucks