‘What It Took to Win’
By John McGreevy
Politics
History
Books 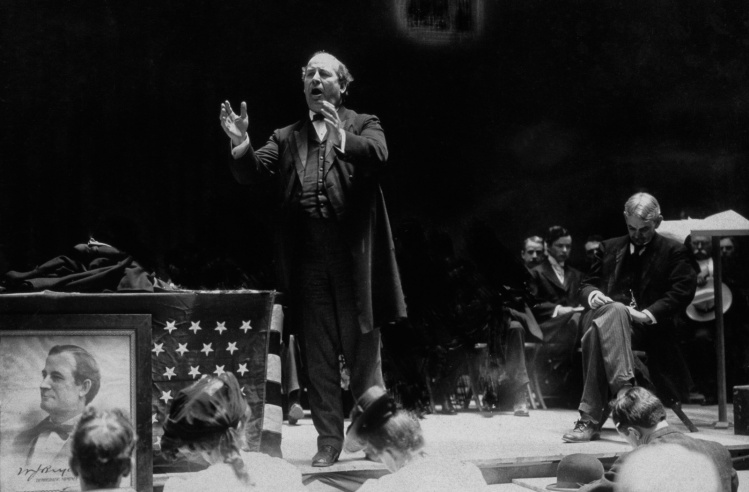 It is the world’s oldest mass political organization, founded by Andrew Jackson and Martin Van Buren in the early nineteenth century, promoted at first through partisan newspapers and now releasing TikTok fundraising videos. For all its flaws, what contemporaries in the 1800s called “The Democracy” may provide the last line of defense for republican government. Many members of its rival party now spout absurd conspiracy theories and remain in thrall to a former—and perhaps future—president still trying to overturn the 2020 election through unconstitutional means.

Enter Michael Kazin. His new book, What It Took to Win: A History of the Democratic Party, could not be better timed. The underlying questions are simple: Can the Democrats win? And can they save American democracy while doing so?

Topic and author are well matched. Kazin’s scholarly career began with a monograph on the labor movement in nineteenth-century San Francisco. He has also written impressive studies of the American peace movement during World War I and populism on both the Left and the Right in American history. His most influential book was his most unlikely: a biography of the three-time Democratic presidential nominee William Jennings Bryan. Bryan’s evangelical Protestantism—he died while campaigning against the teaching of evolution in public schools—has recently overshadowed his pleas for a more equitable economy. Kazin reclaimed this populist Bryan, whose religious convictions informed not just his support for Prohibition but also his impassioned defense of ordinary farmers and workers.

Bryan, the voice of Nebraska’s farmers, and Kazin, the son of prominent New York intellectuals, might seem an unlikely pair. What they shared—and what Kazin believes has informed the Democratic party throughout its history—is belief in a “moral capitalism.” In the nineteenth century, this meant the defense of common people against manipulative banks and financiers. In the twentieth century, moral capitalism meant Social Security, the GI Bill, and Medicare, all devised during Democratic administrations and now, as Kazin writes, “impregnable pillars of state policy.” The Affordable Care Act might join this list, as participation in the program grows and as Republicans abandon their hope of destroying it.

Kazin knows and regrets that moral capitalism did not mean racial equality. The Democratic party at its origin and until the mid-twentieth century was a white man’s enterprise. Many of the party’s leading figures, including Thomas Jefferson (whose Democratic faction preceded the Democratic Party) and Andrew Jackson, were unapologetic slave owners. Jackson brutalized Native Americans to appease land-hungry white settlers. Interestingly, Martin Van Buren, who created the actual organization of the Democratic Party in the 1820s and 1830s, ended his life leading an anti-slavery political party. More typically, however, Democrats, including the many Irish Catholics drawn to the party for its rejection of nativism, only grudgingly supported the abolition of slavery. Most Democrats derided Reconstruction. In the South they drafted laws guaranteeing racial segregation. Woodrow Wilson founded the Federal Trade Commission and pushed through the first graduated income tax. He also mandated segregated lunchrooms in federal buildings.

Much of What It Took to Win detours in interesting ways from textbook narratives. For example, Kazin identifies Frances Perkins and other women advisors to New York governors Al Smith and Franklin Roosevelt as central to the foundations of the American social-welfare state. His sketches of Hubert Humphrey, the mayor of Minneapolis, and Adam Clayton Powell, the congressman from Harlem, illuminate how in the 1940s the two men pushed the Democratic Party away from its segregationist history and toward a commitment to racial equality.

Humphrey urged civil and human rights at the Democratic convention in 1948, although the gesture spurred southern Democrats such as South Carolina Sen. Strom Thurmond toward a short-lived Dixiecrat third party. Black voters became (and remain) a core Democratic constituency. Civil-rights legislation in the 1960s was a bipartisan project, supported by many moderate Republicans such as Nelson Rockefeller, but northern Democrats and one southern Democrat in the Oval Office, Lyndon Johnson, took the lead.

Historians used to occupy more of a bully pulpit in public affairs. Arthur Schlesinger Jr., the most prominent mid-twentieth-century historian of the Democratic Party, began his career with a pathbreaking 1945 study of the age of Jackson and then authored three volumes on the presidency of Franklin Roosevelt. He famously advised John F. Kennedy and composed a celebratory history of the Kennedy administration. Schlesinger’s journals, published in 2007, confirm his mover-shaker status as they detail lunches at the Century Club in New York and trips to Washington to attend high-level party strategy meetings.

Kazin perches on a different branch of the influence tree. As a college student in the late 1960s, he turned away from the Democratic Party out of disgust with its support for the American war effort in Vietnam. He became active in Students for a Democratic Society, a group disdainful of Schlesinger’s establishment liberalism. Kazin is a longtime editor of Dissent, a magazine of the Left. Very much like Schlesinger, though, Kazin encourages historians to cultivate a public voice. He bemoans putatively radical academics mining “postmodern discourse theories” while crafting prose “only an insomniac could appreciate.”

What It Took to Win hints at Kazin’s presence on the edge of a more diffuse, looser Democratic Party establishment. He teaches at Georgetown and is familiar with Washington D.C.’s political circuits. He met with Congressman Richard Gephardt after the catastrophic Democratic losses in 1994. He played poker, we learn, with Bill Clinton’s aide, George Stephanopoulos. He drafted a historians’ manifesto in support of Barack Obama as he battled Hillary Clinton in 2008. His son managed a successful 2018 Democratic senatorial campaign.

Kazin’s elegant narrative is as informed a guide as readers will find, but when he gets to the current moment he is surprisingly cautious, as if afraid to offend.
sharetweet

Kazin’s overarching goal is clear: “mobilize working people of all races and national backgrounds behind a vision of a generous welfare state that would also preserve the health of the planet.” But how to get there? Kazin’s elegant narrative is as informed a guide as readers will find, but when he gets to the current moment he is surprisingly cautious, as if afraid to offend. He understands the puzzles. Democrats are now the clear majority party among college graduates, but only about 40 percent of Americans who voted in 2020 had a college degree. The majority of American voters are still white people without a college degree. Two-thirds of them voted for Donald Trump in 2020.

The success of the Bernie Sanders campaigns in recruiting young, often working-class voters seemed to signal an important shift in the Democratic Party’s appeal. Now, more than a year into the Biden presidency, the Sanders campaigns seem to have been a false dawn. Many of their goals—notably a $15-an-hour minimum wage—are more popular than ever. But beyond Sanders himself, the messengers of left-liberalism struggle to catalyze a Democratic majority.

The challenge, which Kazin could spell out more clearly than he does, is that many working-class whites, along with some working-class African Americans and Latinos, seem alienated from the mores of the Democratic party’s cultural left wing. They recoil from party orthodoxy on topics ranging from immigration to gender to antiracism to a perceived radicalism in public-school curricula. They dislike that some teachers’ unions were so resistant to reopening schools during the Covid crisis.

These working-class voters are often pro-choice but more moderate than college-educated Democratic activists on abortion. A Supreme Court reversal of Roe v. Wade and the virtual outlawing of abortion in some red states will mobilize Democratic partisans and may place Republican candidates on the defensive. But the evidence from Texas since that state passed its restrictive laws is inconclusive. That some Democratic politicians declare abortion rights non-negotiable under any circumstances may only deepen polarization rather than persuade the diminishing number of undecided voters.

It’s not that some Democratic strategists and many Democratic voters don’t realize the need to appeal beyond the party’s base. Some voters may not be persuadable, in part due to racist fears of changing American demographics. Others are. When given a wide range of Democratic primary candidates to choose from in 2020, working-class Black people, in particular, chose Joe Biden, the candidate with the most familiar face and the most mainstream politics.

Biden’s 2020 victory seemed to confirm the shrewdness of that choice. But in the 2022 midterm elections, culture—often culture refracted through a hostile right-wing media—may triumph over class. Recent polling data on working-class Latinos and Latinas show them drifting in a conservative direction, and Republican Party operatives now swarm one-time Democratic redoubts such as the Rio Grande Valley. Some in the GOP are hopeful that they may be able to stitch together their own multiracial working-class party.

Kazin ends What It Took to Win with an extended tribute to Culinary Workers Union Local 226 in Las Vegas. The union includes workers who come from more than 170 countries and speak forty languages. Most members are Latinos or Latinas. They clean the rooms, carry the bags, and pour the drinks of the city’s tourists. Union members prepared thousands of their immigrant peers for citizenship exams and helped them register to vote. More than any other group, they propelled Nevada’s Democrats to electoral triumphs in both 2018 and 2020. More than any other organization, they bargained for a decent life for their members.

It’s an inspiring tableau. Kazin plausibly sees unions as crucial to mobilizing a sustainable Democratic majority, not only now but for almost the entire history of the party. But Las Vegas is not yet America. Forty percent of households with a union member voted for Donald Trump in 2020. Eighty percent of households with a union member voted for Lyndon Johnson in 1964. Winning beyond Las Vegas may require more message discipline, more evasion of culture-war squabbles, and fewer condemnations of more conservative Democrats than has been on recent display. What It Took to Win will inform both Alexandria Ocasio-Cortez and Joe Manchin about their party’s history. Let’s hope it’s widely read. Whether it will help these Democrats figure out what it now takes to win is—given the alternative—an urgent question.

What It Took to Win
A History of the Democratic Party
Michael Kazin
Farrar, Straus, and Giroux
$35 | 416 pp.

John T. McGreevy teaches history at the University of Notre Dame. He is the author of Catholicism: A Global History from the French Revolution to Pope Francis, forthcoming from W. W. Norton in September.