The “Weekend at Bernie’s” Primary 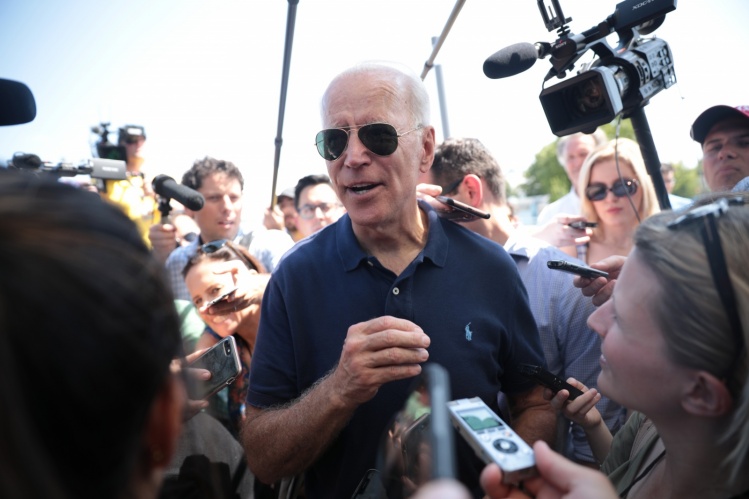 One of the ironies of the ongoing Democratic primary is that Joe Biden’s campaign is best explained by a movie named Weekend at Bernie’s. It was released in 1989, just a year after Biden’s first failed run for the presidency, and has a plot that’s surprisingly relevant.

For those who never saw the movie, a brief summary may be in order. Two young employees at an insurance company, Larry and Richard, uncover fraud, and take their findings to their boss, Bernie, who expresses his appreciation by inviting them to his house in the Hamptons to celebrate Labor Day Weekend. What they don’t know is that Bernie’s the one who has committed the fraud, and he plans to have them killed. But the plot goes awry, and Bernie is the one who ends up dead. Larry and Richard discover his body when they arrive at the house—but Bernie had planned a big party for the holiday, and the guests start showing up before Larry and Richard can contact the police. So they decide to pretend he’s not dead, propping him up in his sunglasses and going to great lengths to keep up the ruse.

Part of what’s supposed to make the movie funny is that you can’t believe no one can tell Bernie is dead. Is everyone blind, or not paying attention, or just too polite to ask the obvious questions?

That’s how I feel about Joe Biden’s much diminished state. Unlike the title character of the film, of course, Biden is still very much alive and some of his old charm persists, at least intermittently, but there is no point—and considerable risk—in denying he’s lost a few steps. When I’ve watched the debates and then read pundits strain to avoid mentioning just how rambling and incoherent his answers were, or gloss over it all with half-joking references to “gaffes,” it’s exasperating. Biden’s decline is there for all to see, but only his most egregiously bizarre comments get much attention. What should be central to any discussion of Biden’s candidacy is either ignored or reduced to a side matter—it’s not that it’s never covered, but that it doesn’t seem to matter when it is. The press and the Democratic establishment, in other words, are like Larry and Richard in Weekend at Bernie’s, and as I watch Biden stumble through speeches and debate answers, forgetting important things that did happen and remembering things that didn’t, I keep wondering why so few people seem alarmed.

As I watch Biden stumble through speeches and debate answers, I keep wondering why so few people seem alarmed.
sharetweet

Take Biden’s fantastical stories and fictional tales of glory. Not once but three times in February he falsely claimed he was arrested while trying to visit Nelson Mandela in apartheid South Africa, as the New York Times reported. “I had the great honor of meeting him,” he said of Mandela at a campaign stop in South Carolina. “I had the great honor of being arrested with our U.N. ambassador on the streets of Soweto trying to get to see him.” Soweto, as it happens, is seven hundred miles away from Robben Island, where Mandela was actually imprisoned at the time. But it gets worse. While speaking in Las Vegas before the Nevada caucuses, Biden further embellished the story, describing a visit Mandela made to Washington D.C. years later. “He threw his arms around me and said, ‘I want to say thank you,’” Biden said. “I said, ‘What are you thanking me for, Mr. President?’ He said, ‘You tried to see me. You got arrested trying to see me.’” To repeat: this is fabulism. While Mandela would visit Biden and other elected officials during a trip to the United States years later, it seems improbable he’d mention an arrest that Biden’s campaign was forced to admit never happened. (The whole episode hearkens back to Ronald Reagan’s made-up stories about his exploits in World War II, such as when he told both Israeli Prime Minister Yitzhak Shamir and Holocaust survivor Simon Wiesenthal that he was present for the liberation of Nazi concentration camps.)

Remember when Biden said in January that he was “raised in the black church, politically”? It’s the kind of exaggeration that comes when faltering mental powers meet political pressure. Or when he praised the racists and segregationists he could work so well with in the Senate, the kind of unfortunate comment he’s inclined to blurt out these days? Or when, just over a week ago, he forgot what office he was running for? “My name's Joe Biden. I'm a Democratic candidate for the United States Senate!”

That’s to say nothing of the debates. Watching a Biden answer is like watching a rickety train hurtling down the tracks. You hold your breath, exhaling when it stays on the rails and makes it to the station, impressed that it somehow worked out. But when it doesn’t—well, it’s a trainwreck. It’s true that some of Biden’s performances have been better than others, but their inconsistency is itself somewhat troubling. Many of his answers don’t strictly speaking make sense, and he’s prone to mangled references, like the infamous time he urged parents to “make sure you have the record player on at night.” The best of his debate answers manage to string together bits of his policy proposals that more or less correspond to the issue at hand, then end with a shouted inspirational slogan about fighting and winning. It’s not uncommon for Biden to give the impression that passing legislation might come down to a boxing match between him and Mitch McConnell, or perhaps a push-up contest.

It actually was a push-up contest, in fact, to which Biden challenged a heavy-set voter in Iowa who asked about worries that Biden was too old. “You want to check my shape, let’s do push-ups together. Let’s run. Let’s do whatever you want to do.” In the video, he appears to start mocking the man’s appearance, but then pulls back, just noting that he himself was not sedentary. It’s of a piece with another odd comment involving other people’s bodies. Just about a week ago in South Carolina, he had this to say about the Violence Against Women Act: “No man has a right to lay a hand on a woman for any reason other than self-defense. If someone in this room got up, took off all their clothes, and walked out the door, no man has a right to touch her.” Come again?

Such statements from Biden could be multiplied. But really it’s been the cumulative effect of watching him over the past year that’s so troubling. He squints all the time, has a penchant for peculiar anecdotes, and seems uncertain of how to handle time limits during debates, cutting himself off or making references to the flashing lights. On the campaign trail he can seem spent—recycling greatest hits, going through the motions, but just not all there. The new “gaffes” keep coming. When you compare Biden today to how he appears in interviews even just a few years ago, the differences are obvious. There’s no shame in this; he’s had a hard life and he’s nearing eighty. That doesn’t mean we have to pretend he’s up to the rigors of what will be a brutal general election campaign.

Weekend at Bernie’s did better at the box office than expected, but it wasn’t really funny. Neither is the prospect of a declining Biden running against Trump. I can’t help but think that Mayor Pete, Amy Klobuchar, and Beto endorsing him just before Super Tuesday are like the movie’s well-heeled, oblivious guests who show up to the fancy party in the Hamptons. “You don't have to do this, Joe, you really don't,” Obama reportedly told Biden before he announced his candidacy. Neither do Democratic voters choosing their next presidential nominee.