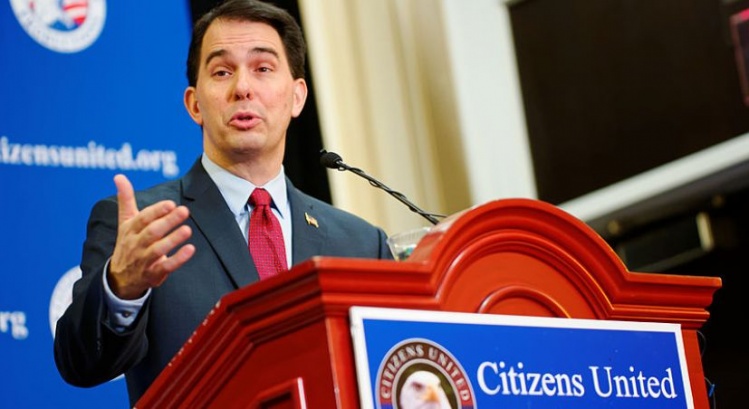 The departure of Gov. Scott Walker from the Republican race for president should come as a relief to American working people. His campaign against public-employee unions in his home state of Wisconsin, underwritten by billionaire businessmen Charles and David Koch, proved devastatingly effective, and his goal was to take it nationwide. Not that he was the only Republican candidate to take aim at what is, by general agreement, a fading target—organized labor as both a political force and an advocate for workers is perhaps weaker now than it’s ever been. But Walker, even more than fellow Republican Chris Christie, had been especially vocal in demonizing unions. That put him at odds with many of his fellow citizens: Support for unions has been rising since 2008, according to an August Gallup survey, with 58 percent of Americans—and 42 percent of Republican voters—now viewing them favorably.

A plan Walker issued days before stepping down, costumed in the rhetoric of freedom, flexibility, and expanded opportunity, was essentially a proposal for finishing off organized labor once and for all. Its title was “Power to the People, Not the Union Bosses,” as if Walter Reuther and Albert Shanker still strode the land, legions of auto-workers and schoolteachers massed behind them. Empowering people, in Walker’s view, would mean abolishing the National Labor Relations Board, rewriting federal law to make Right to Work “the default position for all private, state, and public-sector workers,” replacing overtime pay with unpaid time off, and stripping employees of their ability to bargain collectively. The plan appears to have died with Walker’s candidacy. But its spirit is very much alive among many in the GOP—those who recall Ronald Reagan’s decision in 1981 to fire eleven thousand employees in the air-traffic controllers union the way some remember, say, the establishment of Social Security. That they speak so cynically about labor is not surprising. That Democrats seem to speak so little of it is not reassuring.

According to the Economic Policy Institute, since the beginning of the “Reagan Revolution” in 1980, American workers have seen their hourly wages stagnate or decline, while real gross domestic product has grown by nearly 150 percent and net productivity by 64 percent in this period. More and more of the jobs Americans hold today come without reliable, living wages or benefits like health insurance, retirement plans, training, and job security. Measures like Walker’s aren’t meant to improve things, but rather accelerate what began some time ago. The decoupling of wages and benefits from productivity has been evident over the past two decades, according to the EPI, a period that has “coincided with the passage of many policies that explicitly aimed to erode the bargaining power of low- and moderate-wage workers in the labor market.”

It was in 1984 that Harvard economists Richard B. Freedman and James L. Medoff wrote What Do Unions Do?, a detailed analysis on how organized labor had served as a positive force in the American economy in the twentieth century. Their data showed unions to have been “historically egalitarian,” with rising union wages helping to lift nonunion wages and bridge the gap between low-wage service jobs and higher-paying professional positions. They also found strong unions to be “positively associated with managerial innovation and technological improvement,” and union workers to be more motivated and “less resistant to innovation in the workplace, for they had less to fear than nonunion workers that change would eliminate their jobs.” Thus, they argued, “a society genuinely concerned about increasing productivity would encourage, not disparage, a strong labor movement.”

In other words, productivity and the dignity of workers can and often do go hand in hand. Given what has transpired in the past thirty years, those genuinely concerned about the nation’s economic health would now seem obligated to encourage a strong labor movement. Support for such a position is grounded in Catholic social teaching beginning with Rerum novarum (1891), in which Pope Leo XIII both declared the moral necessity of doing one’s job responsibly with an eye toward the common good, and insisted on the right of workers to form unions to protect their interests. These principles have been expanded in the encyclicals of Leo’s successors. For his part, Pope Francis set aside time in New York to meet with newly unionized car-washers, thus emphasizing the church’s commitment to economic democracy. “The power of the employer to withhold bread is a vastly greater advantage than the power of the individual employee to refuse to labor,” Bishop Edwin V. O’Hara observed in Commonweal more than eighty years ago. That we should need such a reminder in 2015 demonstrates the fragility of the labor movement’s achievements and the importance of the political effort to preserve them. Seeking to further disempower workers is not just shortsighted, but wrong.