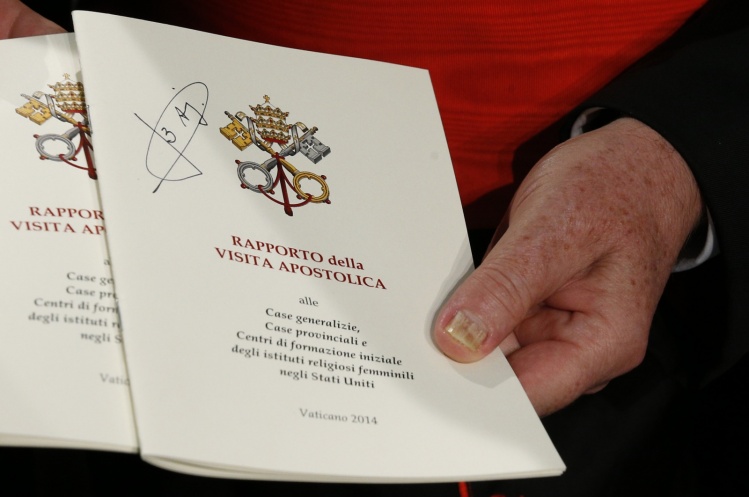 To read the "Final Report on the Apostolic Visitation of Institutes of Women Religious in the United States of America," which was released this morning by the Congregation for Institutes of Consecrated Life and Societies of Apostolic Life (or CICLSAL), you would think the aim of the whole project was to produce the world's wordiest (and most expensive) thank-you note.

CICLSAL is "sincerely grateful for the presence of women religious in the United States," and for the work that they have done "courageously" and "selflessly" for so many generations. That's on page 1 (click here and scroll down for links to the PDF of the report, and of the remarks at this morning's press conference). "The Dicastery expresses its gratitude to women religious" -- page 5. On p. 7, "this Congregation expresses its gratitude to the sisters who minister within their own communities for the precious service rendered to their institute and to the Church." And "once again," on p. 8, CICLSAL "wishes to express the profound gratitude of the Apostolic See and the Church in the United States for the dedicated and selfless service of women religious in all the essential areas of the life of the church and society."

Way back in 2008, when the visitation was first announced, it did not seem likely to end in a lengthy note of grateful recognition. That was partly because the news came alongside that of the CDF's doctrinal investigation of the LCWR, and partly because of the visitation's opaque origins and stated aims: "to look into the quality of life of religious women in the United States," in light of then-CICLSAL head Cardinal Franc Rodé's concerns about "a certain secularist mentality that has spread among these religious families, perhaps even a certain 'feminist' spirit."

It didn't take a cynical mind to feel pessimistic about a project aimed at exposing feminism among women's religious congregations. The whole point of that "Thank You, Sisters" campaign you may recall -- an outpouring of affection and support, in various media, from Catholic laypeople and priests -- was to counteract what looked like an uncalled-for attack on the lives of faithful U.S. sisters.

But that was years ago. CICLSAL has new leadership. We have a new pope, one who has troubled himself to say unambiguously positive things about women's contributions to the church (and the inadequacy of current provisions for same). The Year of Consecrated Life, the Vatican's tribute to vowed religious, has just begun. And the visitation itself -- which took three years and God knows how much money to complete -- was generally left to sisters themselves to conduct. The result, as Jim Martin has pointed out at America, is "a positive, sometimes adulatory" document that says nothing at all about feminism or any other supposed heresies, and communicates the challenges facing women's apostolic congregations in terms that the sisters themselves would recognize and affirm. That's a relief. It will go a long way toward repairing the strained relationship between the church's male hierarchy and its women religious -- though the ongoing LCWR investigation is obviously still a problem. As Sister X put it in Commonweal in 2009, "Any pastoral invitation to dialogue in the current visitation has largely been compromised by Cardinal Levada’s simultaneous investigation of the LCWR’s doctrinal orthodoxy."

But if the report is a relief and an affirmation, it also represents a huge waste of time, and of money.

I suspect those who pushed for this in the first place -- Cardinal Rodé's anonymous informers -- may not be happy with what the effort got them. After all, both the positive and the negative findings in the report are things that sisters and their supporters have been saying for years. It is encouraging to see CICLSAL acknowledge that the financial hardships now faced by many congregations are "the long-term consequences of women religious having been undercompensated for their ministry over an extended period of time." But Sister X said as much in 2009. And when the report notes that "the very large numbers of religious in the 1960s was a relatively short-term phenomenon that was not typical of the experience of religious life through most of the nation's history," it could be quoting Helen Maher Garvey's article in Commonweal last month.

The final report explains its goals thus: "We wished to gain deeper knowledge of the contributions of the women religious to the Church and society as well as those difficulties which threaten the quality of their religious life and, in some cases, the very existence of the institutes." If only there were a body of women religious with experience as leaders in their respective communities who might have been consulted; then Rome could have arrived at this accurate but not-surprising assessment of religious life without the trouble of a protracted and distressing "visitation." But while CICLSAL was expressing "gratitude" to sisters who work in leadership roles in their congregations -- and identifying the difficulty of replacing them, as numbers of new recruits dwindle -- the CDF was putting them as a body into receivership.

This report reads at times like an apology for, or at least a counterweight to, the LCWR investigation, in particular when CICLSAL notes how the sisters' dedication to "social justice" is in harmony with the vision of Pope Francis, and "gratefully acknowledges [the] apostolic zeal" that has led women's communities to "discover creative and purposeful ways of responding to current societal issues as their foundress/founder would have addressed them today." It voices the desire of "a number of sisters" for "greater recognition and support of the contribution of women religious to the church on the part of its pastors," and for "honest dialogue with bishops and clergy" and "input into pastoral decisions which affect them or about which they have considerable experience and expertise." The sisters' concerns have plainly been heard, as Sharon Holland, IHM, said at this morning's Vatican press conference. "It occurred to me," she said, "that as the Report is read, many may recognize expressions in the document which could have been copied from their Institutes’ Chapter documents." Which sounds to me like a very generous way of saying "We could have told you all this years ago."

But if the report does give Rome greater insight into the concerns and contributions of American sisters -- the kind of insight that prompts genuine respect and even reform -- perhaps it will have been worth the trouble in the end. Looking at both the visitation and the LCWR investigation, then in their early stages, Sister X said:

What I sense today is that the Vatican will not budge in how it thinks theologically about what it means to be a woman; nor will it consider opening positions of real ecclesial authority to women. There is simply no getting away from the fact that in the Catholic Church it is men who tell women how they should understand themselves as women. Rome wants women religious to accept such understandings not merely without dissent, but without comment. The Vatican doesn’t want independent-minded women theologians or biblical scholars, and seemingly won’t read or quote them unless the women mimic the Vatican’s—and that means men’s—voice and views.

A few years have certainly made a difference there. Not a sea change -- that part about what sort of women theologians the Vatican is willing to listen to still sounds very accurate -- but the beginnings of a change, some hopeful signs that there may be a willingness to budge after all.

"We joyfully welcome the many recent statements by Pope Francis about the indispensible and unique contributions of women to society and the church," the report says. It goes on to quote him in Evangelii Gaudium calling for "still broader opportunities for a more incisive female presence in the church" and insists, "This Congregation is committed to collaborate in the realization of Pope Francis's resolve that 'the feminine genius' find expression in the various settings where important decisions are made, both in the Church and in social structures." That's no idle talk, and it's a long way from Cardinal Rodé's fretting about feminist influence among religious women. Rome shouldn't have needed to launch a "visitation" to get there, but good could yet come from the whole mess. That really is something to be grateful for.