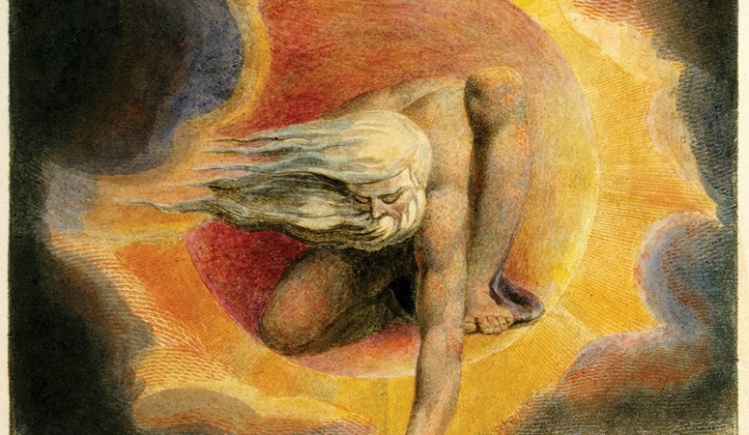 In Utopia, Limited: Romanticism and Adjustment, Anahid Nersessian quotes from a beautiful passage by William Blake. In it, the Romantic painter and poet discusses what he calls “the bounding line”—the line that marks the limits of things and, in marking these limits, turns chaos into form:

The great and golden rule of art, as well as of life, is this: That the more distinct, sharp, and wirey the bounding line, the more perfect the work of art; and the less keen and sharp, the greater is the evidence of weak imitation, plagiarism, and bungling.... What is it that builds a house and plants a garden, but the definite and determinate? What is it that distinguishes honesty from knavery, but the hard and wirey line of rectitude and certainty in the actions and intentions. Leave out this line and you leave out life itself; all is chaos again, and the line of the almighty must be drawn out upon it before man and beast can exist.

For Blake, the bounding line and the limitation it signifies aren’t antithetical to life; they are the very precondition for life. Life, like art, depends on form and order.

Blake’s idea that limitation might be life-giving lies at the very heart of Utopia, Limited. The book is a defense of restraint of all kinds: poetic form, by which Nersessian means things like rhyme and meter; natural conservation; renunciation; self-discipline. Nersessian argues that, when viewed from a certain angle, Romanticism dramatizes the “desirability of constraint.” Her book powerfully does the same.

These are big ideas with broad implications, but Utopia, Limited also has a more focused subject to explore: how the British Romantics imagined utopia. And who were the Romantics? At least for this book’s purposes, they were British writers who worked between 1750 and 1850—poets like Wordsworth and Keats and novelists like Austen and Shelley whose work responded to the seismic shifts of the French and Industrial Revolutions. And what is utopia? Etymologically, it means “no-place” but also suggests “the good place.” It is the land of perfection that exists beyond our own; the polity of goodness—a land of justice and plenty and equity—that helps us see the flaws of our own polity; the world of the not-yet.

Nersessian argues that, partly because the Romantics lived through the excesses and disappointments of the French Revolution, they had a very particular and, to our minds at least, peculiar sense of utopia. They did not imagine it would arrive through the violent destruction of all that is and the creation of a new and better world. Rather, it would arrive—if it ever did arrive—through what Nersessian, borrowing from the critic Northrop Frye, calls “adjustment”: “a formal as well as an ethical operation that allows human beings to accommodate themselves to the world by minimizing the demands they place upon it.”

For the Romantics, Nersessian argues, the true utopia would involve acknowledging and accommodating limitation and lack. “The good place” wouldn’t transcend this world but would “learn to manage with less.” Since the “world can only take so much of human demands,” it would be characterized less by endless bounty than by the equitable sharing of scarce goods. This Romantic utopia, Nersessian writes, “was a vision of a better world neither cleaved off from nor materially distinct from our own.”

What does this limited utopia look like in the imaginative works of the period? Take Percy Shelley’s epic poem The Revolt of Islam. In this wild work, full of clotted language and exotic visions, two Greeks named Laon and Cythna, republicans and feminists both, lead a revolt against the Sultan Othman. They triumph, briefly ushering in a new world free of tyranny. This new world isn’t what we might have expected, though. It is barren and almost unpopulated. The few people remaining are vegetarians, making minimal demands upon the world and sharing the scarcity that they all experience. The reader can’t help but think, “Republicanism wins over tyranny and all we get is…this?”

Nersession argues that Shelley isn’t ridiculing the idea of utopia. Rather, he’s debunking a mindset that sees utopia as a perfected world, a world of easy abundance. “By inverting the conventional association of utopia with plenitude,” Shelley instead suggests “a new notion of utopia based in the idea that everyone should have the same amount of deprivation as everyone else.” Nersessian goes on: “a truly utopian definition of equality must be predicated upon the universalization of scarce resources, and that it must be able to encourage belief in a world that could be ‘bright’ not simply in despite but because of its barrenness.”

Nersessian sees similar versions of utopia-through-limitation in Keats, Wordsworth, and others. In each instance, utopia is a matter of adjustment: adjusting to the realities of this world rather than dreaming of another. As Nersessian writes, “Romantic scenes of adjustment are often saturated with good, even rapturous feeling; this provides a clue that limitation may be called utopian only if it is not treated as cognate with defeat.” Nersessian argues, successfully I think, that the Romantic insistence on limitation does not require accommodating the status quo. In fact, the Romantics were quite radical. They argued not that utopia couldn’t be achieved, but that it could be achieved only by finding the world’s bounding lines and adjusting ourselves to them.

UTOPIA, LIMITED is an impressive and ambitious work, though it suffers from a problem common to many such books. It has a strong, clearly expressed central claim: that Romanticism saw utopian possibility not in a fantasy of limitlessness and plenitude but in limitation and renunciation. And it has several excellent readings of individual texts and authors. For example, Nersessian argues that Shelley uses simile in The Revolt of Islam as a way to put “into language the desire for two things to be identical, only to show that they might never be so.” This is a good insight about Shelley, but also about figurative language in general.

Sometimes, however, the link between Nersessian’s grand claims and individual readings can be difficult to grasp. Take the book’s chapter on Romanticism and “secular realism.” In it, Nersessian argues that Romanticism “offers a worldfeel that binds human attention to the intractable matter of the everyday.” (“Worldfeel” is Nersessian’s translation of Kant’s Weltanschauung, which she defines as “an embodied perception of the world insofar as the world is available to the senses.”) Essentially, Nersessian claims that Romanticism—or at least the Romantics she covers in her book—rejected the idea that meaning and plenitude could only be found in the transcendent. Rather, they found meaning and plenitude in what the philosopher Charles Taylor has called the “immanent frame”: the “this-worldly” realm that exists “without reference to the ‘supernatural’ and ‘transcendent.’” When we read in Wordsworth’s famous “Ode: Intimations of Immortality” that “the meanest flower that blows can give / Thoughts that do often lie too deep for tears,” we see that the this-worldly might contain within it Taylor’s hint of “something greater,” something that makes the world seem charged with meaning. As Nersessian puts it, this poem—and Romanticism more generally—offer “the notion that something might be at once available to the senses and yet in excess of its own materiality.” (A good definition of the sacramental, I might add.)

This is all well argued, and the chapter is filled with moments when Nersessian links abstract arguments to specific formal decisions within the poems she cites—as when she argues that Wordsworth’s “off-rhyme of ‘groves’ and ‘loves’…mim[es] the forced fit between everything around us and everything we want it to be.” But does the argument about secular realism really relate to the book’s broader argument about utopia? If you squint, you can make out the connection: whatever place of happiness there is, Wordsworth suggests, will be found in the world of the everyday, not in the transcendent. But you do have to squint, not just here but in several other places.

Nersessian’s thinking is grounded in contemporary literary theory—eco-criticism, queer theory, and affect theory all make appearances here—and the book’s real insights can sometimes be swallowed up in a morass of jargon: “I attempt a recuperative account of bad taste that finds, in the embarrassing arts of empire, the kernel of a non-intuitive decolonial aesthetics capable of being integrated into the obverse project of Romantic utopianism.” In Nersessian’s defense, she uses such terminology not to show off her theoretical bona fides but because such theories offer her a conceptual framework for the big ideas she wants to talk about, ideas that go well beyond the history of literary Romanticism to include cultural and political questions that remain relevant today. Why is it, Nersessian asks, that the contemporary left “sets itself, almost by default, against the governing and guiding of desire by the constraints of form,” privileging instead limitlessness in both poetry (free verse) and culture (free love)? Why is transcendence so often understood as “a supersession of the world and its limits”? What about the possibilities enabled by restraint, both in poetry and in economics? What about a world that doesn’t relentlessly seek more and more stuff but instead seeks a more equitable distribution of the limited stuff that is actually here? (These are questions that Commonweal readers may recognize from Pope Francis’s recent encyclical on the environment.) Nersessian writes, “Romanticism teaches that the abdication of possibilities can furnish us with equanimity just as it can furnish us with art.” Utopia, Limited teaches the same lesson, showing us that Blake was right: “leave out this line and you leave out life itself.”

Bookmarks | A God in Hiding