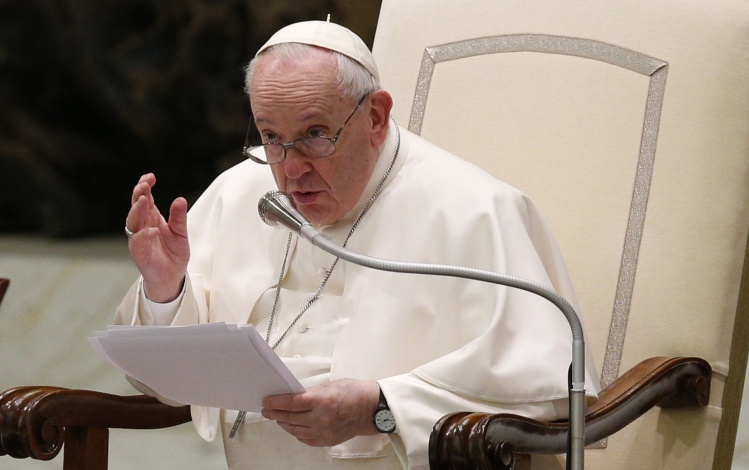 Pope Francis speaks during his general audience in the Paul VI hall at the Vatican, February 9, 2022 (CNS photo/Paul Haring).

In late December, I argued in the pages of America that the measures Pope Francis has recently taken against traditionalists—especially the motu proprio Traditionis custodes—seem to contravene his pontificate’s consistent emphasis on dialogue. “Whereas he has a long history of advocating for dialogue with adversaries, arguing that unity cannot be attained by the suppression of one group by another,” I wrote, “Francis appears now to be choosing just that—suppression.”

Austen Ivereigh, in response to my article, suggests that I suffer from naïveté when it comes to traditionalists—that I view them merely as “people with harmless if peculiar liturgical tastes.” What’s more, he argues that I don’t comprehend the sheer scale of corruption in the traditionalist movement, corruption that is so pervasive that dialogue should be abandoned: “Rather than dialogue, which would only serve to feed the corrupt person’s self-justification, the proper response is to put such a person in crisis.”

I made clear in my article that I’m not oblivious to the more dangerous aspects of traditionalism. Not only are too many traditionalists perilously close to rejecting the Second Vatican Council, but, relatedly, there are connections between traditionalism and that which is most vile in the history of the Church: racism, anti-Semitism, homophobia, and the authoritarianism of today’s Catholic integralists, for example. The threat this style of traditionalism poses to ecclesial unity is real.

Still, I remained troubled by the discontinuity between Francis’s emphasis on dialogue and his actions vis-a-vis traditionalists, and if Ivereigh is correct that Francis views traditionalists as so corrupt as to deserve suppression, then I am even more troubled.

I cannot pretend to have studied Francis’s pre-papal life and writings as much as Ivereigh has, of course. But having read Massimo Borghesi’s depiction of Jorge Bergoglio’s theology and ecclesiology in The Mind of Pope Francis (for which Ivereigh wrote an endorsement), I can’t help but note the disjunction between the dialectical focus of Bergoglio’s thought both before and after he became pope and what is found in Traditionis custodes. In his book, Borghesi persuasively argues that, influenced by his reading of St. Ignatius of Loyola and theologians like Romano Guardini, Bergoglio understood that ecclesial unity could not be imposed from above—that there necessarily exists a polarity in the Church that can and should flower into a communion that doesn’t abolish tension but lives into it. “The Ignatian vision is the possibility of harmonizing opposites,” Bergoglio wrote in 1976, “of inviting to a common table concepts that seem irreconcilable, because it brings them to a higher plane where they can find their synthesis.” He continued: “Unity through reduction is relatively easy but not lasting. More difficult is to forge a unity that does not annul differences or reduce conflict.”

How does this conception of unity lived out in creative tension square with the path of ‘Traditionis custodes’?
sharetweet

How does this conception of unity lived out in creative tension square with the path of Traditionis custodes, the non-dialogical nature of which Ivereigh himself acknowledges? And how does this understanding of unity in any way square with Ivereigh’s depiction of a pope who suppresses traditionalists as an act of mercy in order to force them into conformity? These incongruities are underscored by Traditionis custodes being handed down just before the start of a synodal process that explicitly insists on the importance of open dialogue.

To his credit, Ivereigh doesn’t try to soft-pedal Traditionis custodes; instead, he defends the very features of it to which I object. To do so, however, he portrays traditionalists in a way that lacks nuance. Indeed, the ways in which traditionalists are described by my fellow progressives, combined with their barely restrained glee at Francis’s actions, sometimes bothers me more than Traditionis custodes itself. Ivereigh argues that all traditionalists—from traditionalist bishops down to the young traditionalist who finds herself spiritually nourished by the Extraordinary Form—are so corrupted by ideology as to not merit a dialogical response. Ivereigh even compares traditionalists to the Italian mafia whose sins are such that they can only be shocked into repentance.

If “good” traditionalists exist, Ivereigh asks, why don’t they stand up against the hateful comments made against Francis by hordes of pseudonymous online trolls? Given that our political and ecclesial divisions are too often exacerbated by social media, I have to admit that I’m not inclined to criticize anyone for not posting enough on Twitter or arguing in the comments section of Facebook. And surely I am not the only progressive Catholic who has met many “good” traditionalists online and in person and engaged in constructive and even vibrant dialogue with them. I’ve met traditionalists of all ages; some have been my students. They have uniformly recognized me as fully Catholic even while acknowledging the very real differences that exist between various aspects of our theology, ecclesiology, and morality. The unity we experience is one forged by precisely the kind of dialogue Francis has urged.

In a passage about the influence of Guardini on Bergoglio’s thought, Borghesi writes that “communio is realized in a dialogical form, in the patient development of interconnections that does not pretend to negate the accents, the variety of approaches that remain.” Too many of my fellow progressives appear more willing to demonize opponents than engage with them. They refuse to acknowledge anything good in the other, and, whether consciously or not, thereby give themselves an excuse to avoid the hard work and even discomfort of dialogue rooted in love that fosters communion across differences.

These differences are not new in the Church. As the response to Traditionis custodes has unfolded, I’ve thought a lot about Thomas Merton’s 1965 book Conjectures of a Guilty Bystander, in which he wrote about the hardening divisions between “conservatives” and “progressives” in the wake of the Second Vatican Council.

Merton’s description of “extreme conservatives” in the 1960s certainly bears marked similarities to some of our contemporary traditionalists, particularly the legion of Twitterati who attack Francis behind the safety of a Latin pseudonym. According to Merton, some conservatives will seemingly “go to any length in order to defend their own fanatical concept of the Church.” Not only is their understanding of tradition “static and inert”; it actually celebrates some of the most questionable and scandalous facets of Church history: “Inquisition, persecution, intolerance, Papal power, clerical influence, alliance with worldly power, love of wealth and pomp, etc.” They’re characterized by triumphalism and a belief that they are the Church.

But Merton is no less scathing in his criticism of “extreme progressives.” While progressives shout about the necessity of dialogue and openness, some are “hermetically closed” to conservative Catholics. These progressives are guilty of their own “arrogant triumphalism” that ridicules and dismisses conservative voices, thereby showing “a serious lack of that love to which they frequently appeal in justification of their procedures.”

I don’t pretend to have any special insight into why Francis chose to deal with traditionalists in the way he has. I trust him and am open to the possibility that I am missing something. Still, I can’t shake the conviction that Merton’s admonition applies just as much now as it did when he wrote it.