Under a Watchful Gaze 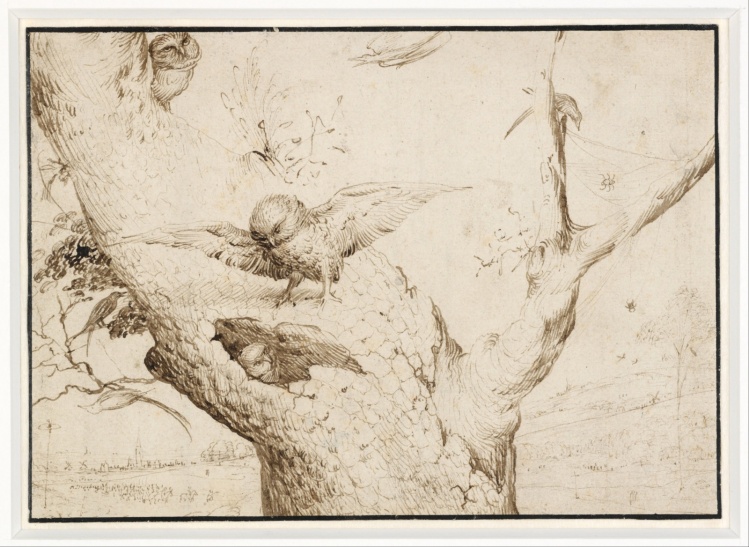 There have been a lot of great books of poetry published this year, and there have been a lot of great lines in those books. Take these from Terrance Hayes’s American Sonnets for My Past and Future Assassin, which speak, in a manic and intelligent voice, about America and poetic form: “I lock you in an American sonnet that is part prison, / Part panic closet, a little room in a house set aflame.” Or these, from Catherine Barnett’s Human Hours, which still make me laugh every time I read them: “Samuel Beckett, who to me is very fly, / may not fit everybody’s definition of fly.”

But my favorite come from “Little Owl,” a sixteen-line gem of a poem in A. E. Stallings’s fourth and latest collection, Like. The poem opens, “It’s not what we see, but what sees us / Makes us who we are.” There’s so much to love here: the nicely balanced, slowly unfolding first line that tumbles into the much shorter, much quicker second; the simple, monosyllabic diction; the chiasmus (we-us-us-we); the confidence of its voice.

Yet there’s also the way that Stallings flips the typical poetic perspective on seeing. Most poets would assert that it’s precisely what we see that makes us who we are; that it’s our capacity to see, and the things we train our sight on, that define us. Think of Elizabeth Bishop’s “Sandpiper,” for example—another excellent poem about a bird, another excellent poem about seeing. In it, Bishop looks at a sandpiper, and what she sees is that he’s looking, too. As the bird runs along the shoreline searching for food, he “stares at the dragging grains”; he is “focused,” “obsessed,” “looking for something, something, something.” The poem suggests that the sandpiper is who he is because of how and what he looks at, and it suggests that Bishop is who she is because of how and what she looks at. Seeing is selfhood, and so is poetry.

To be clear, Stallings herself sees things with impressive exactitude. As we move through “Little Owl,” Stallings gives us outstanding little bits of noticing, like the owl “balanced implausibly on an olive branch.” (How lovely that “implausibly” is!) Like in general is filled with precisely seen, exquisitely rendered details. In one poem, a swarm of bees “helicopters into a different dimness / Taking their saddlebags of sweetness with them.” In another, the speaker sees “ink-black seaweed tossed among the rocks / Like obsolete typewriter ribbons.”

In a collection that so carefully notes what we see, why claim then that it’s “what sees us / Makes us who we are”? The final lines of “Little Owl” suggest an answer. As we move towards the end, the watcher becomes the watched, and the imaginative scale of the poem expands dramatically: “Then [the owl] swiveled the orbit of her gaze upon us / Like the Cyclops eye-beam of a lighthouse.” We think we’re in charge, that the owl is under our gaze and thus under our control, only to find that we are not and that she is not. The poem, and the world, are larger—more mythic, more terrifying—than we had thought.

In this poem and throughout Like, Stallings works brilliantly and inventively within inherited forms: sonnets, sestinas, villanelles, terza rima. Many if not all of the poems rhyme; most are in regular meter. The poet and critic Michael Robbins has described form as “those features that make a given verbal act shareable”; they link the poem up with tradition, with a broader and communal history of which it becomes a part. It’s not what we see, but what sees us makes us who we are: for the formalist poet, the poem becomes what it is by taking its place and its freedom under the watchful gaze of form.

What we are, in this poem and throughout the collection, is at the mercy, under the power or love, of forces beyond us: poetic forms, intimate families, strange cultures, stranger gods. To be seen is to realize that your perspective is folded within a larger one; to write formal poetry is to realize that your creation is folded within a larger history of creation. Both lessons are useful.

To be seen is to be made vulnerable, to open ourselves up to true encounter.
sharetweet

Stallings, the author of three previous collections as well as a verse translation of Lucretius’s The Nature of Things, grew up in Decatur, Georgia. In 1999, she moved to Athens, Greece, where she’s lived ever since, working as a poet, critic, and translator. Like’s first poem, a villanelle titled “After a Greek Proverb,” mines this extended stay for humor: “We’re here for the time being, I answer to the query— / Just for a couple of years, we said, a dozen years back. / Nothing is more permanent than the temporary.” Jokily, Stallings describes her family as still living as if on temporary leave: “We dine sitting on folding chairs—they were cheap but cheery”; “Twelve years now and we’re still eating off the ordinary: / We left our wedding china behind, afraid that it might crack.”

Yet this kind of geographical and cultural relocation, no matter how long lived with, remains disorienting, and Stallings dwells in a kind of in-between world. She’s both American and Greek, a superb domestic poet with a strong mythic sense, a translator between different languages and traditions. Stallings’s poems often arise from her reading of the classics: “Colony Collapse Disorder,” for example, takes as its provocation a line from Homer’s Iliad in which soldiers are compared to a swarm of bees. But they are just as often punningly playful. “Dyeing the Easter Eggs” is also about dying; a poem called “Shoulda, Woulda, Coulda” begins, in a line that grammarians will love, “The mood made him tense.”

The English word translate comes from the Latin transferre, to carry across, and Stallings’s best poems continually cross borders, ferrying us from one world to the next and back again. The poem “Cast Irony” begins with a cleaning error: someone unthinkingly has “scrubbed this iron skillet / In water, with surfactant soap,” leaving the cast iron pan “despoiled of its enrobing oils,” “dulled,” “vulnerable and porous.” It’s an ordinary mistake, one I’m afraid I’ve made myself, and it’s hardly the stuff of epic poetry. That is, until we get to another simile: the skillet

Who has an anachronistic heart of steel,

From skillet to boar’s-tusk-helmet, from 2018 to the Bronze Age: that’s Stallings’s regular route of transfer.

This sort of shift in scale isn’t always accomplished via figurative comparison. “Lost and Found” begins with the speaker looking for something small that has been lost: “Some vital Lego brick or puzzle piece / … a ball, a doll’s leg popped out of its socket, / Or treasures fallen through a holey pocket.” This common enough experience leads the speaker to think about a parable—“Not the one men preach of the lost sheep, / The lesser-known one, on the housewife’s bother / Over a missing coin”—and before you know it the speaker has migrated to “the valley on the moon / Where everything misplaced on earth accrues.” The book is filled with similar moments of transport, where a pun or allusion or simile takes us to places we hadn’t been expecting.

One of the collection’s most startling poems—startling in its opening figure and in its complicated moral sense—is called “Empathy.” In it, Stallings imagines her way into the experience of those migrants who flee Syria and Afghanistan and end up in Greece:

Our listing bed isn’t a raft

As we dodge the coast guard light,

And clasp hold of a girl and a boy.

Recognizing that there’s a world beyond our life of lost Legos and cast-iron tragedies isn’t necessarily ennobling. “Empathy isn’t generous,” Stallings writes, “It’s selfish.” She goes on: “It’s not being nice / To say I would pay any price / Not to be those who’d die to be us.” (Stallings herself has worked closely with migrants, starting a poetry program for refugee women in Athens.)

Empathy might not be generous; it might not result in a more just refugee policy. But acknowledging how we are seen by others, admitting that we are seen by others, is a moral imperative. To be seen is to be made vulnerable, to open ourselves up to true encounter. It is to move away from ourselves and towards the wider, wilder world of which Like gives us such a clear sense.