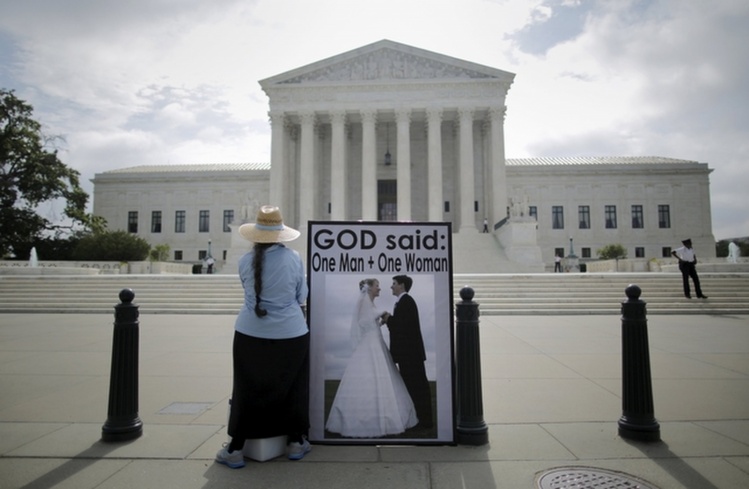 Whether Americans today sin more frequently or less frequently than they did when I was a boy growing up in the 1950s is difficult to say. Yet this much is certain: Back then, on matters related to sex and family, a rough congruity existed between prevailing American cultural norms and the traditional teachings of the Catholic Church. Today that is no longer the case. If any doubts persisted on that point, the Supreme Court decision in the case of Obergefell v. Hodges, legalizing gay marriage, demolished them once and for all.

During the early days of the Cold War, when it came to marriage, divorce, abortion, and sex out of wedlock—not to mention a shared antipathy for communism—Washington and Rome may not have been in lockstep, but they marched to pretty much the same tune. As for homosexuality, well, it ranked among those subjects consigned to the category of unmentionables.

No doubt the hypocrisy quotient among those upholding various prohibitions on what Americans could do in the privacy of their own bedroom or the backseat of their father’s car was considerable. But for a nation locked in an existential struggle against a godless adversary, paying lip service to such norms was part of what it meant to be “under God.”

Cold War-era sexual mores had implications for U.S. foreign policy. Even if honored only in the breach, the prevailing code—sex consigned to monogamous heterosexual relationships sanctified by marriage—imparted legitimacy to the exercise of American power. In measured doses, self-restraint and self-denial offered indicators of collective moral fiber. By professing respect for God’s law, we positioned ourselves on his side. It followed that he was on ours. Here was American chosenness affirmed. Certainty that the United States enjoyed divine favor made it possible to excuse a multitude of transgressions committed in the name of defending a conception of freedom ostensibly mindful of God’s own strictures.

The justices who voted in favor of gay marriage don’t care a lick about whether the United States is “under God” or not. On that score, however dubious their reading of the Constitution, they have accurately gauged the signs of the times. The people of “thou shall not” have long since become the people of “whatever,” with obligations deriving from moral tradition subordinated to claims of individual autonomy.  That’s the way we like it. August members of the Supreme Court have now given their seal of approval.

Their decision highlights just how attenuated the putative link between God’s law and American freedom has become. As a force in American politics, religion is in retreat. True, even today politicians adhere to rituals that retain religious overtones. For example, the National Prayer Breakfast that President Eisenhower instituted in 1953 remains a fixture on Washington’s calendar. Yet this is an exercise in nostalgia, devoid of substance. Some symbols matter—like displaying the Confederate battle flag, for example. Others—like emblazoning your currency with “In God We Trust”—don’t mean squat.

On balance, we may judge this a clarifying moment. The irreversibility of the cultural revolution that has unfolded across the past half-century now becomes apparent to all. The trajectory of change that this revolution mandates will continue, even if its ultimate destination remains hidden. For some the transformation underway may be a source of regret, for others cause for celebration, but there is no denying its profound significance, reaching into every corner of American existence.

A nation once purportedly “under God” has decisively rejected the hierarchical relationship that phrase implies. Those who interpret the nation’s laws have dropped all pretense of deferring to guidance from above. From here on out, we’ve got the green light to chart our own course.

Again, however, there are likely to be foreign policy implications. For Americans, as the Obergefell case vividly testifies, freedom is not a fixed proposition. It evolves, expands, and becomes more inclusive, bringing freedom’s prevailing definition (at least in American eyes) ever closer to perfection.

But a nation founded on universal claims—boldly enumerating rights with which “all men” are endowed—finds intolerable any conception of freedom that differs from its own. The ongoing evolution of American freedom creates expectations with which others are expected to comply.

Recall that for the first two centuries of this nation’s existence, American diplomats were indifferent to discrimination against women. Then gender equality found a place on the American political agenda. Now the State Department maintains an Office of Global Women’s Issues devoted to “empowering women politically, socially, and economically around the world.”

We should anticipate something similar occurring in relation to LGBT communities worldwide. Their plight, which is real, will necessarily emerge as a matter of official U.S. concern. Today the United States condemns the racism, sexism, and anti-Semitism that Americans once found eminently tolerable. Tomorrow standing in principled opposition to anti-LGTB discrimination wherever it exists will become a moral imperative, Americans declaring themselves rid of sins they themselves had committed just yesterday.

Whether or not U.S. support for LGBT rights goes beyond the rhetorical, societies still viewing themselves as “under God” will bridle at this sudden turn about. Especially in the Islamic world, demands to conform to the latest revision of American (and therefore universal) freedom will strike many as not only unwelcome but also unholy encroachments. Whether the upshot will contribute to the collective wellbeing of humankind or sow the seeds of further conflict remains to be seen. At least in the near term, the latter seems more likely than the former.

In any case, we are witnessing a remarkable inversion in the relationship between religion and American statecraft. Rather than facilitating the pursuit of America’s liberating mission, faith now becomes an impediment, an obstacle to freedom’s further advance. It’s no longer the godless who pose a problem, but the God fearing with their stubborn refusal to accommodate truths that Americans have ever so recently discovered. Almost without anyone noticing, God himself has moved from our side to theirs.