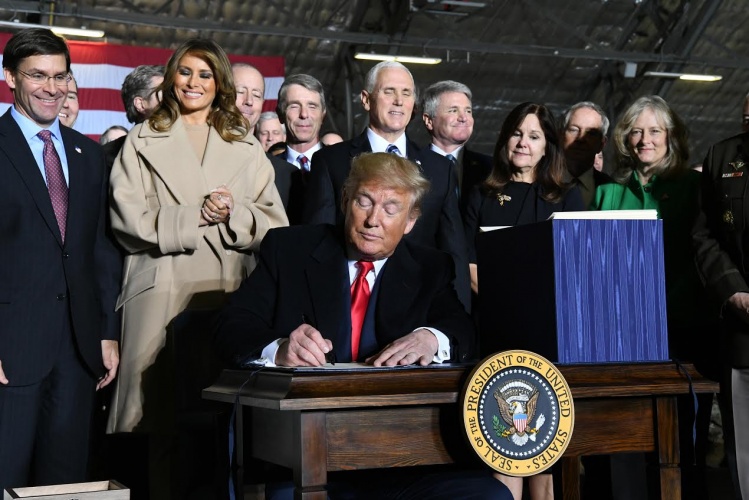 President Donald Trump’s $4.8 trillion budget proposal for fiscal year 2021 is a clear and damning statement of his administration’s policy priorities. It would hamstring many federal agencies and sacrifice the basic necessities of countless Americans in order to spend even more money on the military and Trump’s dubious vanity projects.

Contrary to the president’s frequent promises not to touch widely popular entitlement programs, his budget would cut funds for Medicaid and Social Security disability insurance. It would also reduce spending on the Affordable Care Act. Together, these cuts would amount to $1 trillion less in federal spending on health care. Funding for food stamps would also be reduced and eligibility for the remaining benefits would be subject to stricter work requirements.

And those are just the safety-net programs. Other vital functions of the government would also be undermined. Trump’s budget would eliminate a quarter of the Environmental Protection Agency’s funding. The Department of Health and Human Services would also see cuts, which would squeeze the National Institutes of Health and the Centers for Disease Control. Housing and Urban Development would lose 15 percent of its budget; and two of its popular programs, the Community Development Block Grant (which funds Meals on Wheels) and the HOME Investment Partnerships Program, would be shuttered. The budget directs the Department of the Interior to stop acquiring new land for conservation and to end welfare and loan programs meant to benefit Indian country. It also cuts funding for the Department of Education and eliminates some of its programs; less money would be set aside for subsidized student loans, and the Public Service Student Loan Forgiveness Program would be scrapped entirely. There would also be less money for the Federal Emergency Management Agency, forcing state and local agencies to shoulder more of the burden for disaster relief. On the international front, the budget proposes slashing funding for the State Department and USAID by 22 percent, and humanitarian aid for disaster relief and the care of refugees by a third.

Trump’s proposed budget is really a campaign document, and the contrast between Trump’s spending priorities and those of his Democratic rivals could not be starker.
sharetweet

Meanwhile, spending on the military would remain a top priority: $3.2 billion would be allocated to the development of a hypersonic weapon; there would be a 18.4 percent increase in funding for the National Nuclear Security Administration, so that it can develop a new nuclear weapon; $2 billion would be set aside for construction of Trump’s border wall, while the Department of Homeland Security, which is in charge of Customs and Border Protection as well as Immigration and Customs Enforcement, would also see a marked increase in its budget. Trump’s new Space Force would receive $15.4 billion, and NASA would be tasked with a mission to Mars.

The budget does take a few positive steps, such as an enormous spending increase for opioid-treatment and suicide-prevention programs at the Department for Veterans Affairs. But more often what the Trump administration touts as effective funding for social services—like a one-time grant to fund childcare initiatives—is designed merely to soften the blow of much larger cuts elsewhere.

The Trump administration promises that its budget will “put our nation on a fiscally sustainable course” by cutting “waste and fraud” in entitlements, social-service programs, and government agencies. The budget’s stated goal is to reduce the deficit, but it would make permanent the tax cuts from the 2017 Tax Cut and Jobs Act, which primarily benefit corporations and the wealthy, and have already blown a hole in the federal government’s balance sheet. Largely because of these tax cuts, the 2020 budget deficit is projected to be the largest since 2012.

Ultimately, of course, it is Congress that holds the national purse strings, and so there is no chance that this budget will pass in its current form. Trump’s proposed budget is really a campaign document, and the contrast between Trump’s spending priorities and those of his Democratic rivals could not be starker. As Democrats call for higher taxes on the wealthy to bring health insurance to more people, and to improve education, food security, public health, labor conditions, and infrastructure, a second Trump administration promises to gut social programs and to channel even more of the nation’s wealth to the military-industrial complex. Trump’s budget expresses an idea of American greatness that is both stingy and sclerotic. He is obsessed with superficial markers of national glory and supremacy—next-level nukes, missions to Mars, a big, beautiful wall—but he has no time for the less glamorous but more important functions of government. The real issue is not, and never was, “waste and fraud,” or fiscal sustainability; it’s whether we will have a government that serves and protects all Americans.