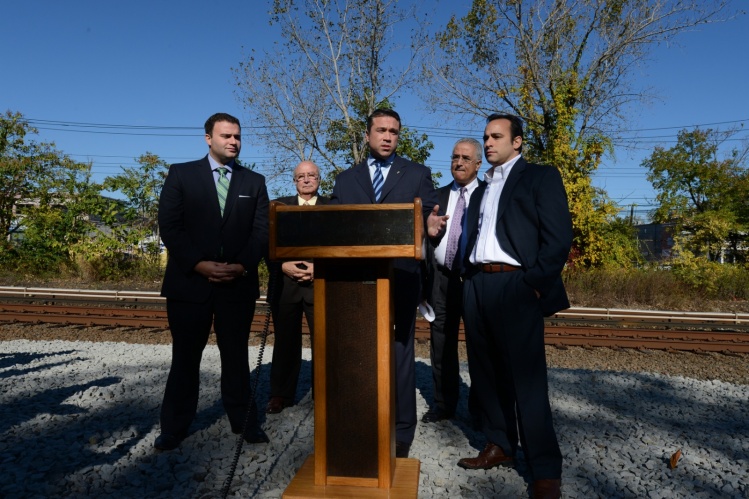 The staging of a political redemption story during a crucial party primary might seem an unlikely strategy in this season of referenda on Donald Trump, especially when the protagonist is an ex-con known nationwide for threatening to toss a journalist from a balcony in the U.S. Capitol. But Michael Grimm—who was elected to Staten Island’s sole U.S. House seat in 2010 on the momentum of the Tea Party movement, resigned after being found guilty of tax fraud, and is now a devotee of the president—would very much like a fresh hearing, and, if you please, a majority of the votes in New York’s June 26 Republican primary.

Tanned and trim, the forty-eight-year-old Marine veteran and former FBI agent possesses an obvious knack for retail politics, something his opponent, incumbent Dan Donovan, doesn’t quite. Released in 2016 after serving seven months in prison, Grimm is a tireless campaigner with seemingly no off-switch, and a reputation during his time in Congress for personally addressing the complaints and concerns of his constituents—whom he referred to as his “caseload.” Supporters still remember him fondly for his contribution to recovery efforts after Superstorm Sandy, which devastated the island in 2012.

Donovan, a former prosecutor and district attorney, secured the 11th congressional seat in a 2015 special election following Grimm’s conviction. He won reelection easily a year later and has generally served as a reliable Republican vote in Washington. According to FiveThirtyEight, Donovan has voted with the president more than 85 percent of the time, a loyalty that Trump recently rewarded with his endorsement.

With likely Democratic nominee Max Rose facing an uphill battle, one of these men will probably be representing Staten Island in Congress come 2019. To understand how that’s possible in New York City—which in 2016 went for Hillary Clinton by more than 22 percentage points over Trump—it’s helpful to look at the particular political and cultural history of New York’s so-called forgotten borough over the past half-century. Situated across New York Harbor from Manhattan, and separated from Brooklyn by a tidal strait known as The Narrows, Staten Island is a community apart from the rest of New York, and not just geographically.

Linking the borough to Brooklyn is the Verrazano-Narrows Bridge, at one time the longest suspension bridge in the world. Before the bridge was built in 1964, Staten Island was sparsely populated, consisting of small towns and verdant spaces. The Verrazano consequently offered an escape route of sorts for the many working-class Italian and Irish who were skeptical of urban liberalism and fearful of rising crime and drug use in the city. The resulting effect on the borough is obvious to this day. Whereas Brooklyn is dense, diverse, and distinctly urban, Staten Island remains a lower-density enclave of single-family homes, quiet neighborhoods, and a predominantly white population that shapes borough politics. This conservative redoubt in the shadows of the big city has been referred to as “New York’s Idaho,” among other less endearing terms.

There’s some truth to this caricature; the island’s political disposition is plainly more parochial and suburban than that of the surrounding city. But it belies a vibrant and competitive political culture that’s reminiscent of those found in small towns across the country. Competing yard signs adorn the lawns of quiet neighborhoods during election years, and highly contentious political contests are often the norm rather than the exception. The forgotten borough’s voters—unlike most of heavily Democratic New York City—regularly embrace ticket splitting, and so Republicans and Democrats can be found representing it in both state and local government.  Still, there are more registered Democrats—the island is home to some of the last true “Reagan Democrats”—than Republicans, and union membership is high. The borough overwhelmingly voted for President Trump in 2016; it more narrowly supported Barack Obama during his 2012 reelection bid.

Indeed, Islanders would fail most red-state litmus tests, notes Richard Flanagan, professor of politics at the College of Staten Island, because the undergirding ideology that best defines the borough isn’t really conservatism at all, but rather an oppositional sensibility disdainful of the cultural cosmopolitanism of the nearby metropolis.

“Staten Islanders are willing to bear the scorn of the outside world,” Flanagan says. “Scorn is worn as a badge of honor.”

The island’s political disposition is plainly more parochial and suburban than that of the surrounding city. But it belies a vibrant and competitive political culture that’s reminiscent of those found in small towns across the country.
sharetweet

Two legendary political figures wore that badge with particular pride, according to Flanagan: John J. Marchi, who served five decades in the New York State Senate, and Guy V. Molinari, longtime congressman and then borough president. Marchi was a dedicated champion of the borough and a proponent of secession from the city. A lifelong Roman Catholic, he opposed abortion and the death penalty and was a vocal advocate for welfare reform. Marchi ran for New York mayor twice, losing both bids, even after stealing away the Republican nomination in 1969 from sitting Mayor John Lindsay, who went on to win re-election that same year on the Liberal Party line. Marchi was thoughtful and well read, and in many ways he set the tone for island politics during the latter half of the twentieth century.

Molinari cut a different figure. Son of an Italian immigrant, he was a brash Republican power-broker, populist in demeanor and confrontational in style. After serving five terms in the House of Representatives, he bequeathed the congressional seat to his daughter Susan, who carried the family name in Washington for another seven years while he served as borough president until 2001.

Politics on the island can arguably be viewed as an ongoing conversation between the competing styles of Marchi and Molinari, with the latter winning out in more recent years, especially following the election of Trump. That’s what’s on display in the contest between Grimm and Donovan.

The primary adopted a rather nasty tone early on, with each side swapping accusations of ethics violations and electioneering shenanigans. Donovan at times looks out of his element in this environment, approaching politics like a prosecutor more than a politician, and his more recent efforts to appeal to the district’s Trumpier instincts—such as his campaign’s mailer depicting women and children fleeing across the U.S.-Mexico border—have come across as ham-handed if not unethical. Grimm, on the other hand, is plainly more comfortable in this climate. During our interview, the onetime undercover agent argued that funding for the Deferred Action on Childhood Arrivals program, or DACA, should be used as leverage against congressional Democrats in exchange for supporting the president’s border security priorities, such as his highly coveted border wall. And just this week, Grimm likened the cries of migrant children separated from their families at the southern border to those at any given daycare center across the United States. (Grimm is unmarried and does not have any children.)

Grimm, who enjoys a close relationship with the aging Molinari and considers him a mentor, has without question capitalized on Donald Trump’s popularity in the borough, and clearly believes that an unflinching embrace of the MAGA movement will catapult him past his opponent and back into his old seat this fall. At a recent candidates forum, Grimm reminded his critics and supporters alike that the power-brokers in Washington, along with liberals in Albany (Andrew Cuomo) and City Hall (Mayor Bill De Blasio), do not have sensible Staten Island’s best interests at heart. Like Marchi and Molinari before him, Grimm has a better sense than Donovan of the political mood in the district. (Though the 11th includes several shoreline neighborhoods in South Brooklyn, it’s Staten Islanders who will ultimately decide who wins.) Although his legislative record was demonstrably moderate during his time in office, Grimm is better suited for this particular moment in American politics, in which appeals to tribal instincts and outrage often transcend the issues. While remorseful for his legal indiscretions, he believes that it is his mission not only to win over the voters in his district, but also to educate them on the ways in which political careerists and sneering elites seek to silence those who push back against the establishment.

“Staten Island is the only seat we have,” Grimm said to a cheering audience at the forum, doing his best Marchi-and-Molinari impression.

For voters, a capable congressman like Dan Donovan just might not do, not now. Donovan, rather reasonably, has differed at times with Trump on approach and policy, opposing the tax overhaul bill that hit his constituents hard, as well as the administration’s efforts to repeal the Affordable Care Act and replace it with an insufficient legislative remedy. Yet even if Donovan—a Staten Island native from a working-class Catholic family—has served his district ably, one gets the sense that he is a man out of time in Trump’s Republican Party, no matter the president’s endorsement. A recent NY1-Siena College poll showed Grimm leading Donovan by 10 points, and while Donovan’s campaign insists that their own internal surveys suggest otherwise, he is clearly campaigning on the back foot. The National Republican Congressional Committee has stepped up its efforts on Donovan’s behalf in recent weeks, and a pro-Trump super PAC has agreed to invest more than $150,000 toward his re-election bid. Donovan has likewise received support from former mayor Rudy Giuliani, a popular figure in the borough.

Grimm, meanwhile, is largely on his own, up against the press, his party, and even his president. Staten Island, as it turns out, is all he has. But in the end that could very well be enough.