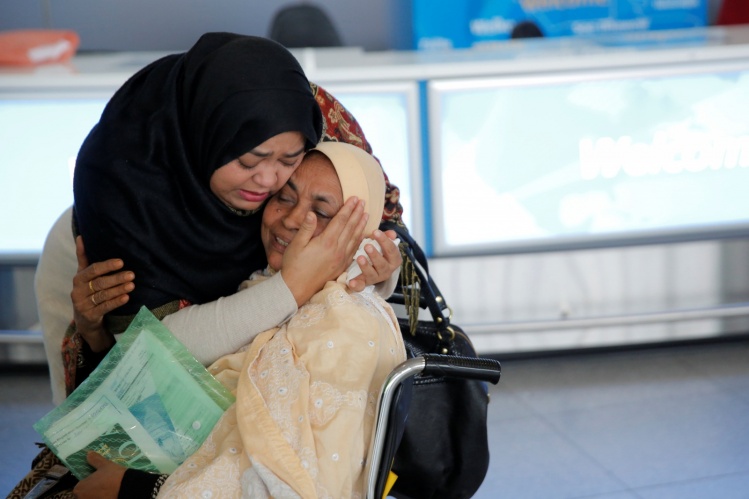 One of the happiest days in my life was the day in 1999 when I became an American citizen. Born in Italy while my Syrian father, then a medical student, was doing his residency there, I had later met and married a Syrian-American U.S. citizen, Rashid Jijakli, the father of my three American-born children. Three years after our marriage, I became eligible for citizenship, passed the citizenship test, proudly took the oath of allegiance, sang the “Star-Spangled Banner,” waved my little souvenir flag, and—with a few tears—began a wonderful new life.

One of the things a prospective citizen studying for that citizenship test learns about is the Bill of Rights—a powerful testament to the American love of freedom, especially so, for me, in the Fourth Amendment: The right of the people to be secure in their persons, houses, papers, and effects, against unreasonable searches and seizures, shall not be violated, and no warrants shall issue, but upon probable cause, supported by oath of affirmation, and particularly describing the place to be searched, and the persons or things to be seized.

Have you perhaps heard about the “checkpoints” that are so familiar in the Arab Middle East? A “checkpoint” is nothing more or less than an unreasonable search, always with the risk of arrest by the mukhabarat or secret police. How grateful I was, how liberated I felt, to be at last the citizen of a free country where such searches and seizures were forbidden by the most basic law of the land.

But does the Fourth Amendment apply to me, a Muslim-American citizen in a simple hijab? Does it apply at Los Angeles International Airport?

On February 23, 2016, I arrived at LAX booked on a Turkish Airlines flight to Istanbul and then to Gaziantep. Gaziantep is a city in South-Central Turkey, near the Syrian border, where my aged mother and two brothers are living as refugees from the Syrian wars. Having re-injured my already injured back a few days before, I arrived at security in a wheelchair kindly provided by the airport. But when I was given my boarding pass, I immediately noticed the fateful letters SSSS, which meant, as I knew from my one and only prior trip to Turkey, that I would be “randomly selected” for extra screening.

Sure enough, at the security checkpoint, I was shunted to a separate line where my purse and carry-on were emptied out and inspected and where I was required to remove my back brace and undergo both the usual full-body scan, twice, and also an aggressive body search, again twice. The first body-searcher reached between my legs and roughly groped under my hijab. I had asked her to please be gentle with my injured back. When I repeated this request to the second body-searcher, she saw fit to give me a sharp jab in the back, making me cry out, lurch forward in pain, and demand to speak to her supervisor.The supervisor came. I assured him that I was cooperating, only asking for reasonable care with my injury. He apologized, returned my passport to me, and released me to proceed to the gate with my friendly wheelchair pilot. Alas, my problems were only beginning.

Does the Fourth Amendment apply to me, a Muslim-American citizen in a simple hijab?
sharetweet

After waiting at the gate for some minutes, I heard a voice over the loudspeaker: “Lubana Adi, come to the counter!” I went. Several armed men plus one woman were waiting for me. I was required yet again to show my visa and passport, yet again to undergo a body search, and yet again to have my purse and carry-on emptied out and worked over. This time, in addition, my hands and feet were checked with a kind of bomb paper that, as they coldly explained to me, would reveal whether I had recently worked with explosives.

Then commenced a rapid-fire cross-examination with the agents taking turns. I was asked for my name, my husband’s name, my children’s names, and my destination, which was Gaziantep.

“Where else?” came the skeptical response, but given my injury and the winter weather in a snowy region of Turkey, I truly had no other destination in mind. Later in the interrogation, I would have to deny an agent’s gratuitous claim that I planned to visit Syria. The questions continued:

“Are you bringing in supplies for refugees?” (No.)

“Why do you have so much money?”

I had several thousand dollars, which they required me to count out in front of them. Some was for my mother, to help her pay her rent. Some was against the possibility that I might again need to be hospitalized in Turkey as I had been on the earlier trip when I suffered the initial injury. By law, I should add, any American citizen may bring as much as $10,000 with her on a trip abroad. I was well under the limit.

I was required to provide my mother’s and my brothers’ addresses in Gaziantep. I was asked where I worked (I don’t work outside the home). I was asked about my volunteer activity (I help out at my children’s school).

Finally, an especially sullen agent asked the rudest question of all as he waved my passport in front of my face:

“Where did you get this?”

As this interrogation went on, I had begun to sense that its purpose was to goad me to anger or sarcasm or some other outburst that could be construed as a refusal to cooperate. They came closest with this insulting question, but as I wanted only to continue with my family visit, I let the question pass with only:

“Where do you think I got it?”

At length, they seemed to give up, and I was allowed to board, but my troubles were not over. I was barely settled in my seat when two armed men approached from the front of the plane, and another two from the back. I was required to leave the plane and undergo a last interrogation in the small open area where the boarding ramp meets the aircraft. This time, one of my interrogators had studied Arabic and asked me, with a non-Arabic accent:

“Do you have daesh [ISIS in Arabic] in your city?”

The intrusion of bad Arabic seemed a way to serve notice that for him I was not an American, despite my passport, but an Arab whose city was Hama, Syria, my family’s city of origin. I have not laid eyes on Hama since 1993. I know nothing at all about ISIS activity there, and I said so. Finally, grudgingly, they allowed me to re-board but with the parting promise:

“We’ll be waiting for you when you come back.”

And indeed they were.

My trip to Gaziantep was fully the warm and caring reunion with my mother and brothers that I had hoped it would be. My back continued to hurt, however, and I did make one trip to a local hospital where an MRI was taken of my back. The image was provided to me on a CD for my doctors to view on my return.

For the agents waiting for me on my March 19 return, that CD was highly suspect. Why was the hospital’s name not on it? What else was recorded on it? Why had I attempted to open a bank account in Gaziantep? (I had indeed tried, in the hope of facilitating later assistance to my mother.) Why had I left the country with only $500? (Much had gone to my mother, some to the hospital, some to fancy restaurants for large family gatherings, a good deal on a large number of expensive gifts for stateside family and friends, and so on. But in any case the money was mine! Does an American traveler have to account to government agents for every dollar she spends?)

Arriving at LAX exhausted after a thirteen-hour flight, I was subjected this time to three-and- a-half hours of interrogation. Every souvenir was scrutinized and challenged. Again, my itinerary was called into question:

“You went to Syria!”

Again, I said that I had not. At one point, near the end of the ordeal, one of the agents pounced, as if catching me out at last in some deception:

“You went to Gaziantep—Gaziantep, a border city! Why Gaziantep?”

Why Gaziantep? Where else would I go? I was visiting my mother and brothers, and Gaziantep is where they live! I was not allowed to phone my husband, who was waiting with our children to meet me. Instead, my phone was seized by an agent with U.S. Customs and Border Protection; and when it was returned, nothing worked as it had previously. My assumption can only be that its contents were copied.

Toward the end of the three-and-a-half  hours, I could barely stay awake, and I put my head down on the table in exhaustion. Then, suddenly, it was over. My wallet was returned to me with its credit cards in a jumbled stack, and I was ordered to leave. To the agents’ annoyance, I carefully replaced each card in its previous slot in the wallet before walking out to meet my distraught family.

Is America safer because a dozen or more agents spent hours interrogating an American citizen with no criminal record and no terrorist associations? Like any loyal citizen, I want my country protected from any and all terrorist threats. But such “unreasonable searches” are a waste of taxpayer money.

I intend to file no lawsuit, seek no apology. My only hope—as a Muslim, of course, but primarily as a citizen—is to alert my fellow citizens to what is happening to our constitutional protections. The so-called border-search exemption means that the Fourth Amendment’s requirement of probable cause does not apply to customs officials, the Los Angeles Times discovered when editing the shorter version of this story that they published on April 7, 2017. And President Trump did not begin the practice of “detaining” cellphones. That practice began under George W. Bush. But as the Times discovered, cellphone searches by the Department of Homeland Security have skyrocketed in 2017—DHS officials searched more phones in February of this year than in all of 2015.

President Trump’s new security regime is wasting even more of our time and money and, I submit, scorning the spirit if not the letter of the Fourth Amendment of our treasured Constitution.

Lubana Adi cares for her three children at home in Los Angeles County and volunteers in the neighborhood school. She was assisted in writing this account by members of Church of the Messiah, Santa Ana, California.