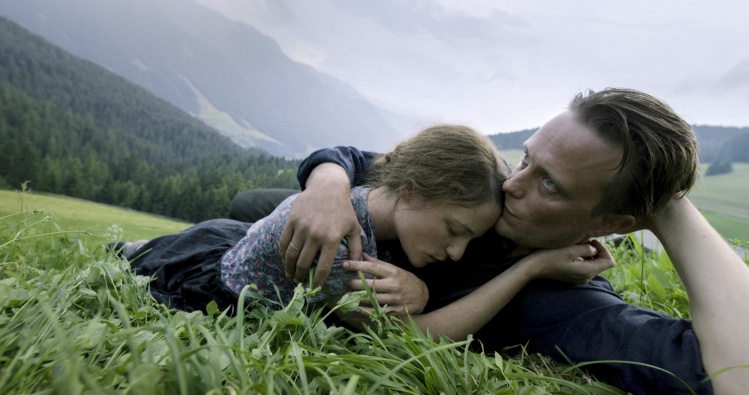 A recent BBC list of the “100 Greatest Films Directed by Women” placed Leni Riefenstahl’s Triumph of the Will at number forty-five. Sandwiched between a vampire Western and an American road movie, it struck many as a deeply immoral choice. Scored with appropriately Völkisch music from Wagner, Triumph of the Will documents the Nazi Party Congress of 1934, a massive event attended by over 700,000 fascists on the Nuremberg rally grounds. Whatever its merits as a piece of filmmaking, it is unmistakably a work of propaganda.

The Nazi vision, as expressed by Riefenstahl, is fundamentally monumental—all vast landscapes, blocks of soldiers, titanic slabs of stone. Riefenstahl even had a hand in planning the Congress’s mise en scene, designing the rally, as Susan Sontag noted, for maximum propaganda-film potential. The film elevates the event’s authoritarian grandeur by cutting out everything quotidian. We see no action, no gesture, that does not contribute to the Volksgemeinschaft. Humanity becomes a kind of flawless geometry, with no place for the trivial or the mundane.

Terrence Malick opens A Hidden Life, his dramatization of the life and death of Austrian conscientious objector Franz Jägerstätter, with an extended quotation from Riefenstahl, segueing from her torchlit processions and grand columns to the sweaty and the banal work that goes into making a world. Through a series of wide shots, handheld close-ups, and quick flashes of montage, we are let into the lives of Franz, his wife, Franziska, and their family, who live in the Arcadian village of Sankt Radegund—“our nest up in the trees,” as Franz describes it in voiceover. We watch as the grass is mowed, the wheat harvested, the donkey fed and the sheep sheared. Children grow, church bells are rung, games are played, seasons pass in great beauty. Nothing of great importance, it seems, happens in St. Radegund.

This will not surprise anyone familiar with Malick’s work. He has spent nearly his entire career—particularly since 1978’s Days of Heaven—juxtaposing the intimate and the small with the grand and inconceivable, from the natural cycles of Thin Red Line to the birth and death of the universe in Tree of Life. His new film attains a similar monumentality, particularly with its grand Tyrolean scenery and astounding natural-light photography by Jörg Widmer.

But A Hidden Life’s greatest moments come from its focus on the insignificant: the brushing of two hands, the opening of a door, the way a child steps through the rain. This gives the film a decidedly non-polemical atmosphere, which, in view of what comes next, should be counted as one of its most remarkable qualities. Jägerstätter (played by August Diehl) is called up first for training, and then, in 1943, for active duty in the Wehrmacht, a position that requires him to swear an oath of loyalty to Hitler. He refuses, and so is imprisoned and, finally, executed. This last period of his life inspires some of Malick’s most visceral filmmaking, particularly the scenes of beatings in Jägerstätter’s cramped Berlin-Tegel Prison cell.

Never once is anyone satisfied by Jägerstätter’s decision. It is unimaginable to everyone.
sharetweet

Jägerstätter’s decision has no political impact; it is not an act of public protest like that of his contemporaries in the White Rose. Rather, it is a private refusal to accommodate evil, an act that does nothing but assert the individual’s right to conscience. We see him challenged by priests, party functionaries, and even a Nazi military judge played, in his final role, by the late Bruno Ganz. They all ask him: Why throw your life away? Why kill yourself for nothing? Only at the very end do we get Jägerstätter’s reply: “I cannot do what I know is wrong.” Malick underplays the moment. Never once is anyone satisfied by Jägerstätter’s decision. It is unimaginable to everyone.

Malick constructs the later portions of his film as a conversation between Jägerstätter’s increasingly extreme ordeal in prison and the life of his family back at home in Radegund. Franziska does her best to keep up the farm, but the Jägerstätters find themselves rejected by their own community, who consider Franz’s decision a kind of treason not only to the Reich, but also to the Aryan race. Everything has changed, and yet all of those same banalities, the quotidian touches that made up their life together, remain: summer storms, plowing and harvest, religious festivals, a child’s encounter with death. This, Malick reminds us, is also life.

A tighter, more conventional film would have focused only on Jägerstätter’s ordeal at the expense of all this life, which proceeds as before. But this contrast is precisely what makes Malick’s film so powerful. Both Franz and Franziska stubbornly refuse—albeit in very different circumstances—to live an evil life, to sacrifice all that is intimate and small to the monumental moloch of race and nation. In Malick’s vision, raising a child or plowing a field can be heroic actions, no less heroic in their way than bravely defying a tyrant. Both kinds of courage, Franz’s and Franziska’s, show that all the grandiose projects of the Third Reich cannot measure up to their unexceptional life together.

Such heroism is completely alien to someone like Riefenstahl, who equates success exclusively with power. In Triumph of the Will, none but the most exceptional members of the community can stand out; all the others are extras, rough material to be shaped and spent by the Führer. People like the Jägerstätters have no place in this vision. But Riefenstahl’s grand spectacles came to nothing; they turned out to be a monument built over a sinkhole. The Thousand Year Reich was gone within a decade.

Franziska Jägerstätter passed away in 2013 at the age of one hundred. She lived to see the Nazis destroyed, her reputation restored, her husband beatified, and his sentence nullified by the Landgericht Berlin. Her faith that, as the film’s epigraph from Middlemarch puts it, “unhistoric acts” mean more for the “growing good of the world” than a thousand party congresses was vindicated—and within her own lifetime. Malick’s film honors this faith, and thereby condemns Riefenstahl’s authoritarian vapidity. Franziska’s quiet insistence on the significance of her own hidden life gets the last word. “The Lord never gives us more than we can bear,” she writes in a letter to Franz. Astoundingly, she was right.