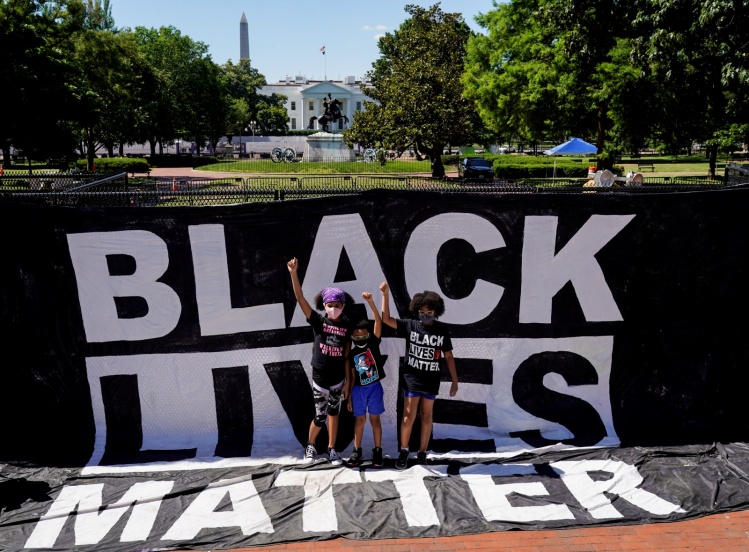 A group of children near the White House in Washington hold up their fists in front of a Black Lives Matter sign June 7, 2020. (CNS photo/Joshua Roberts, Reuters)

Protests against police violence and culture-war battles over the toppling of monuments that honor white supremacists underscore the nation’s ongoing reckoning with racism. A sizable number of Catholic advocates, priests, and women religious are active in mobilization efforts to address systemic racism, and some visibly support Black Lives Matter. Even a few bishops have publicly backed the movement. But a growing number of conservative Catholics are speaking out against BLM, arguing that its positions on LGBTQ issues, gender, and abortion mean Catholics should not support the organization.

Few have gone to the extremes that Indiana priest Ted Rothrock did in calling BLM activists “maggots and parasites” on his parish website. “They are wolves in sheep’s clothing, masked thieves and bandits, seeking only to devour the life of the poor and profit from the fear of others,” he wrote in a now-deleted post. Rothrock himself has since been suspended from public ministry by his bishop. Even so, a predominately white hierarchy continues to show tone-deafness and unnecessary defensiveness in criticizing BLM, which is one of the most effective racial-justice movements in decades. One bishop even sought to silence a Church employee, Rob McCann, the CEO of Catholic Charities of Eastern Washington. After McCann released a video in which he addressed the Church’s complicity in racism over the centuries and praised BLM, Spokane Bishop Thomas Daly was swift to condemn him. “When Rob spoke of the church as racist, himself as racist and essentially all white people are racist—I thought it was a very simplistic way to look at the tragedy of racism,” Bishop Daly told The Spokesman-Review. “No, not everybody is racist by sheer skin color,” Daly said.

McCann later issued his own statement on the Catholic Charities website.

“Though I meant the video to begin a humble examination of my role and Catholic Charities’ role in systemic racism, it was perceived as an attack on the church,” McCann wrote. “And though I meant the video to begin healing rifts within our community, it resulted in some people becoming further entrenched in their positions.” McCann said that his organization, which among other initiatives manages a homeless shelter and low-income housing programs, has been the target of “violent and hateful language” in response to his video. “There also has now been violence committed against my wife and children at my home,” he wrote. “For all of my best intentions, these past weeks have been marked by hurt and sadness from all involved.”

In a statement on the diocese’s website, Bishop Daly describes Black Lives Matter as “in conflict with Church teaching regarding marriage, family and the sanctity of life.” He adds that “it is disturbing that BLM has not vocally condemned the recent violence that has torn apart so many cities. Its silence has not gone unheard. One need not stand with BLM to stand for Black lives.” In a tweet, Bishop Joseph Strickland of Tyler, Texas, said that “we are called to value ALL LIVES and heed the intrinsic God Given value of every person.” In another tweet, Strickland linked to the Black Lives Matter website, writing, “This agenda is DANGEROUS!” Catholic conservatives frequently argue that one can support black lives without supporting Black Lives Matter. In some ways, this is true. There are other organizations committed to anti-racism advocacy. But can Church leaders be full participants in a national reckoning with racism if they admonish a movement that is widely credited with playing the most important role in elevating the reality of police brutality in the public consciousness?

Along with his reprimand of McCann, Daly announced that the annual Catholic Charities Christmas collection this year would be “replaced by or taken in conjunction with the Black and Indian Missions Collection.” He also asked Catholic Charities to “address the issue of abortion and its detrimental effects on the Black community.” Daly’s pivot to abortion—an issue with no shortage of Catholic lobbying, organizing, and media attention over the past four decades—is an attempt to move toward more comfortable, familiar ground. But discomfort is precisely what white Christians need to be feeling right now. Fr. Bryan Massingale, a Fordham University professor and nationally acclaimed writer on racism and the Church, said in a Facebook Live conversation I hosted last month that when he speaks about racism in Catholic schools or parishes he is often told to do so “in a way that doesn’t make white people uncomfortable.” Church leaders may be more comfortable talking about abortion than police brutality, but this conversation can’t be avoided by anyone who considers themselves pro-life. “We cannot close our eyes to any form of racism or exclusion, while pretending to defend the sacredness of every human life,” Pope Francis has said. Humility is a virtue necessary for authentic pastoral leadership. Bishops should learn from and let themselves be challenged by the Black Lives Matter movement and others who provoke necessary discomfort. As for the organization’s supposed disqualifying positions on sexuality and gender, bishops know well that even many Catholics in the pews are not in full agreement with how our Church addresses these issues.

The effort to label Black Lives Matter as unacceptable for faithful Catholics is part of the broader pattern of conservative activism in the Church. The Cardinal Newman Society, Church Militant, the Catholic League, and other self-appointed watchdogs have long gone after theologians, Catholic social-justice leaders, and Church-funded partnerships with secular organizations they deem as hostile to Church teaching. (In a 2013 report, I wrote about how attacks on the U.S. bishops’ flagship social justice and anti-poverty campaign, the Catholic Campaign for Human Development, are led by a small but well-funded network that uses guilt-by-association and other tactics from the McCarthy-era playbook.) In some cases, these pressure groups have succeeded in forcing Church leaders to end relationships with organizations that are largely in agreement with bishops on most issues, but are not always aligned with Catholic teachings on marriage and sexuality. Some Catholic dioceses, for example, have ended decades-long ecumenical partnerships with faith-based coalitions that work on a range of social justice issues—including immigration reform, just wages, and anti-poverty initiatives—after members of those coalitions expressed support for same-sex marriage.

This kind of retreat narrows Catholic identity to a few issues and undercuts effective justice work that requires diverse groups finding common ground. The Church should not make the same mistake with Black Lives Matter. Catholic leaders who reflexively criticize the movement send a message that the Church is at best indifferent to the structural changes needed to dismantle racist systems, or, at worst, opposed to that urgent collective effort.