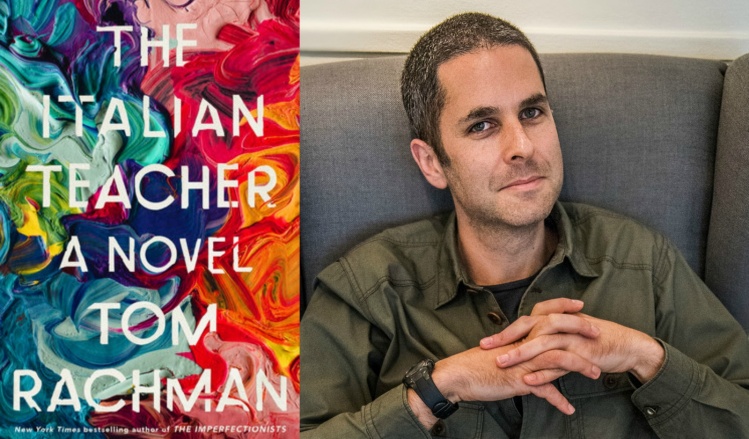 Tom Rachman’s new novel, The Italian Teacher, narrates the mostly hapless life of Charles “Pinch” Bavinsky. An Italian teacher at a Berlitz-like London language school, Pinch holds a PhD in art history, has lived in several countries, adores his two tiny dogs, has back problems, has been in love, is once divorced, keeps a few friends. But what defines his life more than any of this is the mixed blessing of his famous father—and all the anger, jealousy, longing, and grief that father creates.

Pinch is the son of Bear Bavinsky, a modernist painter routinely compared to Picasso. Bear is a figure of Hemingway proportions, all dominance and machismo. If he finishes a painting he doesn’t like, he burns the canvas in an oil barrel. He parties; he cheats; preoccupied with his legacy, he obsesses about it with his son on the phone, insisting that Pinch is the only one of his children he can trust. But of course, the father also disapproves of the son—and the son is marred forever by that disapproval. The paternal motives are not exactly benign. When the teenage Pinch nervously unrolls a canvas he’s been working on—a close-up of a leg, modeled on Bear’s own series of “Life Stills”—Bear peers at it, then pronounces judgment. “I got to tell you, kiddo. You’re not an artist. And you never will be.”

Predictably, pathetically, Pinch spends most of his life trying to rebut that harsh verdict, to make his father proud. Aspiring to write his father’s scholarly biography, defending him to dealers and journalists, he even does his art-history dissertation on Caravaggio, Bear’s favorite artist. (Bear never reads it, not even the dedication.) Bear is a master of casual cruelty and humiliation, even attempting to paint Pinch’s girlfriend in the nude; when she later leaves Pinch, she takes a parting shot: “It’s hard for me to respect a grown man who acts like a worshipful little boy around his father.” Pinch himself doesn’t seem to disagree. Mired in disappointment, morose about his teaching job, he recognizes himself as “a pompous bore, a man he’d dislike.”

If The Italian Teacher is anything, it is immediate—both a joy and a breeze to read.
sharetweet

But there’s more here than a tortured father-son saga. In The Imperfectionists, his acclaimed 2010 debut novel, Tom Rachman offered a subtle, comic portrayal of the world of print journalism. Deftly portraying the staffers of a Rome-based English-language newspaper, the novel is both satirical and sympathetic, good-humored and rueful. The Italian Teacher turns the same intelligent scrutiny on the pretensions, egos, and eccentricities of the art world. In the process, the book transcends plot and becomes a kind of ironical ethnography: parties afloat in champagne; the Midwestern mogul who shows up at a gallery wearing a fanny pack; the snobby art critic who insists he didn’t support the war in Iraq (he did); father-daughter art dealer dynasties; the crude commercial power of tastemaking. Through Bear’s musings, Rachman delivers light-touch reflections on art and artists, creation and reputation. “Culture,” opines Bear, “is a pyramid: a few on top, many squashed under.” And: “Taste contains everything else, from morals to who you love to who you’ll vote for.” And: “Nobody wants a well-behaved artist.”

The novel’s second half takes a curious turn, when Bear entrusts Pinch with access to his secluded French painting studio. That trust triggers an unexpected intrigue—I won’t give it away—that furthers the novel’s fundamental ambiguity; Pinch both honors and subverts his father’s legacy. The plot may strain credulity in moments, but it also allows Rachman to keep multiple ironies in play, to maintain a tone of funny-sad ambivalence.

For the reader, meanwhile, if The Italian Teacher is anything, it is immediate—both a joy and a breeze to read. Its present tense gets us into scenes quickly, delivering delicious sensory impressions. That same present tense doesn’t offer much room for psychology, reflection, or self-analysis. When Pinch falls out with a grad-school friend, Marsden, it happens in one stroke: “he stirs up a growing contempt for Marsden.” We don’t see the contempt burgeoning; it simply appears, and we move on. Such elisions and compressions create a telescoping, summary-driven narrative. Large swatches of time are covered in just a few sentences; after Pinch’s mother suffers a breakdown, for instance, we learn simply that “several spells in psychiatric wards follow.”

At its close, The Italian Teacher gestures toward the kind of legacy worth having, hinted at in Pinch’s relationships with his friend Marsden and his girlfriend Jing. But the fact remains that for his whole life, Pinch was profoundly lonely. For most of it, he wasn’t in touch with Marsden; and Jing has always felt secondary to his other romances, just a warm body. “Is that tragedy?” Pinch asks himself. “That the peaks of my life are entirely inside? Other people—those I so craved—mattered far less than it seemed.”

Such reflections epitomize Rachman’s wan comedy, which invokes emotions but also foreshortens them. The novel’s weakest point is the death of the man whose regard Pinch most craved: his father, who suffers a fatal heart attack in the woods. Pinch’s subsequent grief is conspicuously stunted. Within a page, he’s on to matters of the estate, his cunning plans for managing his father’s legacy. Bear himself is all but forgotten; for Rachman’s protagonist, true mourning—like so much else—remains just out of reach.

Published in the May 4, 2018 issue:
View Contents
Tags
Books
Arts