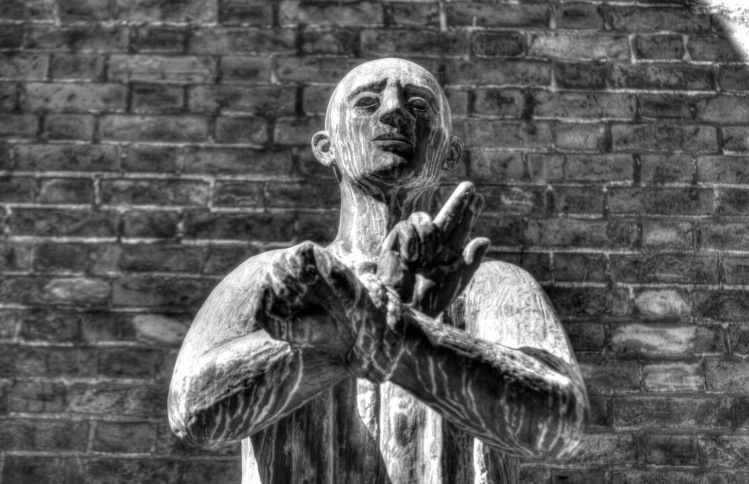 Reading the work of the Swiss theologian Karl Barth often feels like intellectual sparring. The German theologian Dietrich Bonhoeffer, best known in the United States for his participation in the plot to assassinate Hitler, had a very different authorial voice; even at its most unflinchingly prophetic, his work rarely feels as confrontational. Wolf Krötke, a close reader of both theologians, is able to hone in on the brilliant essentials of their work and to prod the reader to reexamine her thoughts about the relationship between us and God in light of their claims—to ask again and again: Is this what I believe?

Krötke, a pastor in Communist East Germany, shares a foundational intention with his subjects, who were also pastors: to speak intelligently and honestly to the way both scholars and non-scholars think about God. Krötke’s description of his own reliance on Barth and Bonhoeffer to build a “theological resistance” when political resistance was largely futile elegantly echoes his investigations into their troubled efforts to do the same during the rise of fascism. Beginning in 1934, with the Barmen Declaration’s theological argument against the totalizing state, Barth, like Bonhoeffer, came to the conclusion that violent political resistance was sometimes necessary. For his own part, Krötke is unsure about the church’s “appropriation of the violent instruments of our sinful era. War, even a so-called just war...offers no general paradigm for Christian resistance to inhumanity, racism, and genocide.”

Krötke lays out the grand structure of Barth’s thought, from his early work on Paul in Epistle to the Romans (1919) through the thirteen volumes of Church Dogmatics (1932–1967). “Barth liked to say,” Krötke notes, “that the church and theology have the task ‘to begin anew at the beginning’ ‘every hour.’” This is certainly true of Barth’s work: you can’t grasp any point without “beginning anew” by retracing it to its premises.

In Krötke’s account, the main girders of Barth’s thought are these: God is, from the beginning, even before creation, “the God who encounters us in Jesus Christ, and is understood in terms of the history of God’s grace with humanity.” This encounter and its manifestations among us are the “history of a partnership in which the God who is friendly to humans comes among us and makes us capable of being his free partners and of leading lives that deserve to be called truly human.” Finally, “because our fundamental orientation is relationship to God, we realize our freedom most fully by corresponding to the call of God.”

“Because our fundamental orientation is relationship to God, we realize our freedom most fully by corresponding to the call of God.”
sharetweet

Krötke cites critics who think Barth’s view affords too little space and agency to humanity. Yet the encounter with a God who elected to grace us with friendship remains Barth’s starting point. All roads begin there. Readers must decide for themselves whether this sets God in the thick of human living, as Barth believed, or whether, as his critics say, Barth’s account of our encounter with God is too uniform—too dependent on German idealist notions of Spirit working through history, and tone-deaf to the particulars of any real person’s relationship to God. Is it a “take it or leave it” doctrine as Bonhoeffer described it? Or does it allow one to feel embraced in partnership with God?

Having established Barth’s fundamental theological outlook, Krötke goes on to explain Barth’s ideas about the nature of sin, the relationship between Christianity and other faiths (including atheism and the covenant with Israel), the importance of our flawed efforts at reconciliation (with God and other people), the role of pastoral care in enabling encounter with God (and the role of exegesis in understanding it), and, most importantly, the nature of the divine-human “partnership” granted by grace—what Barth called “the sum of the Gospel.”

Krötke begins his section on Bonhoeffer by noting that he, too, anchored his work in the encounter between the human person and God. “Faith is God’s gift,” Krötke explains, “whereas religion is always a relationship to God shaped by humans.” Bonhoeffer’s realism can help us see the manifold relationships among people, God, faith, and religious institutions. In this he differs from Barth, who held that all people are “fated” to have religion. This idea of “Fatedness,” Bonhoeffer believed, denies the freedom through which people come to God. In Krötke’s fine summation, “Humans as distinguished from their religion are God’s beloved creatures whose freedom for encountering God contains far more possibilities than any particular form of religious behavior.”

Bonhoeffer held to the Augustinian idea that, in the encounter with God, we discover new possibilities of experience we could not otherwise have imagined. And who is this God? Not a deus ex machina who saves us in time of need, and not only the weak and crucified Jesus, but the God discarded from modern life: “God is for the world only by stepping back from it and in this way giving it time and opportunity to be itself.” Bonhoeffer wrote of the “madness” of the invisible God, yet “God’s mystery sets humans free to allow God to come to them.” God is encountered in prayer and meditation on Scripture, and Krötke offers an eloquent chapter-length analysis of Bonhoeffer’s moving Prayerbook of the Bible: Introduction to the Psalms. The potency of this God, close by when we can do nothing, became more important as the efforts to stop Hitler failed and Bonhoeffer, condemned to prison, could do nothing more. “Sharing” in this God’s suffering in a godless world is a source of guidance and consolation. It is how we identify “ourselves generously and selflessly with the whole community and the suffering of our fellow human beings.”

Krötke’s discussion of these ideas prods the reader into a dialogue with Bonhoeffer on the role of divine and human suffering, God’s mystery and invisibility, and Jesus’s visibility (“Bonhoeffer’s God is the God who becomes nothing other than human”). While the German Christians who followed Hitler believed God manifested himself in German history, Bonhoeffer held that God manifests himself only in and through Jesus Christ. Yet Krötke also remarks on Bonhoeffer’s “openness to other religions,” which “like his understanding of religionlessness, arises from his faith in God in Christ.” Our many religions and varieties of faith are part of human living, where God meets us.

Krötke’s penultimate chapter on Bonhoeffer explores his political work, the “first concentrated effort in the German theological world...to frame the question of state order in terms of Christology.” Bonhoeffer held that the Incarnation and Resurrection do not destroy the world but rather affirm it. Thus, Christ’s Kingdom “is the foundation of the [worldly] state too, which wards off the power of death, preserves the ‘order of the community, marriage, family, and nation [Volk]’ against the isolated individual, and restrains the thirst of selfishness.” In Bonhoeffer’s view, as in Luther’s, there is no right to revolution.

Krötke explains the nature of the divine-human “partnership” granted by grace—what Barth called “the sum of the Gospel.”
sharetweet

But this doesn’t mean the state has carte blanche; on the contrary, the state is obligated to further the other orders of society—church, family, the economic sphere, “culture, scholarship, and art.” And the church must seek to limit state power, which, in its use of sanctions and force, distinguishes itself from Christ’s kingdom of love.

As the Third Reich maintained a minimum of social order, Bonhoeffer hesitated to demand that the church identify it as an aberration that “comes forth as ‘the beast from the abyss’” in denial of Christ. But Bonhoeffer did believe that individual Christians could find that Nazism had abandoned the obligation to work with—and be limited by—other orders of society, placing itself above them as a kind of an idol. In his 1933 essay “The Church and the Jewish Question,” Bonhoeffer wrote, “the state is to create ‘law and order’ for all its ‘subjects.’ The state therefore illegitimately constricts its office when it refuses order and justice to a particular group of people—in other words, the Jews.... The church must stand up without exception for all ‘victims of any societal order’ and first and foremost the Jews.”

Because of the German state’s refusal of justice to the Jews, Bonhoeffer found himself in “an extraordinary situation” in which, as Krötke writes, one could depart “‘from the normal and regular,’ and decide for an action ‘beyond any possible regulation by law.’” While Hitler made lawlessness a new mode of governance, Bonhoeffer saw his own decision to step outside the law only as an exception made necessary by exceptional circumstances—and it was, notably, a decision for which he was willing to accept punishment.

In Krötke’s view, it was this thinking that propelled Bonhoeffer to return to Germany from the United States in 1939. Krötke thinks Bonhoeffer’s theological position on the Nazi state was finally far more radical than the 1934 Barmen Declaration, largely written by Barth. Yet Krötke also leaves us with one more irony: the theology Bonhoeffer developed to fight the Fascist state would soon be appropriated by East German authorities in support of the Communist one.

You Can Go Home Again