Praying with the Pietà
By B. D. McClay
Spirituality
Immigration
Art
Secularism and Modernity 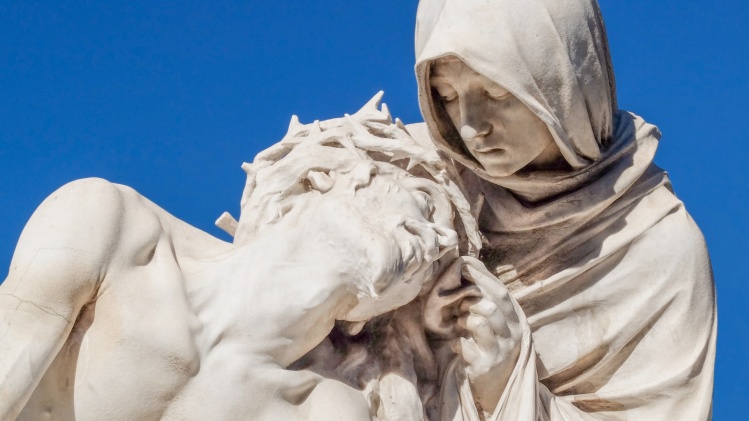 Thomas Kiefer, then a janitor at Customs and Border Protection (CBP) in Arizona, spent seven years looking through the trash for personal items taken from detainees, preserving them, and photographing them for his project, El Sueño Americano. His story, along with a number of his photographs, was featured in the New Yorker last year.

One particularly haunting image—all of the rosaries confiscated from migrants by the CBP as “potentially lethal, non-essential personal property” and thrown in the trash—floated up in my Facebook feed recently, the way images disconnected from their context often do. Kiefer’s project is meant to testify to something about just that kind of stripped-away context; as he told the New Yorker, it’s meant to be “a counterweight to CBP’s dehumanizing practices, which yank everyday objects from the contexts that imbued them with meaning.”

Social media often speaks in the language of images, though reliance on images to produce moral outrage has its limits. At their worst, images can provide a voyeuristic thrill and little else. But at their best, images resist reductive explanations and contain multiple meanings.

Christianity, too, has images which speak to the treatment of migrants. In particular, images of Mary, pregnant and vulnerable, whose vulnerability is thus Christ’s, whose mistreatment is therefore also Christ’s, are not uncommon when it comes to the southern American border. Everett Patterson’s “José y Maria” transports Joseph and Mary to a modern-day urban environment, and an image of Our Lady of Guadalupe handcuffed and led off by ICE (“The Unholy Escort,” by Katie Jo Suddaby) has begun to circulate on social media.

Who are we in the Pietà? Are we the mourners, the mourned, or those who caused this situation to happen? There’s not a single answer to this question, which is part of its value as an image.
sharetweet

As for myself, for the past month or so, I’ve stopped to pray in front of the Pietà in my local church on my way out of the building. Before I took up the practice of praying the rosary, I didn’t really think about the complexity of this image of Mary, because I had never considered the Passion as something that could be understood in relation to Mary. Hans Urs von Balthasar writes in his book on the rosary, The Threefold Garland, that it is in Christ’s Passion that the meaning of Mary’s “yes” is fully revealed: “Hers is a consent which is constantly being expanded wider and wider. Here in the Passion she is being asked that, for the sake of God and that of man, she says yes to the unimaginable torture of her Child.”

Mary holding the dead and tortured body of her son seemed right, somehow, for this “political moment”—an image that contains mourning, desolation, comfort, and reproach. When I read about a man who kills himself when he’s separated from his children, or the images of detained children from 2014, I think of the Pietà. When I see Kiefer’s collection of rosaries, I think of the Pietà.

Though Mary probably embraced Christ’s body at some point between its being removed from the cross and its entombment, the image itself is our own creation. In his lecture on the Pietà, Richard Harries points out that one of the earliest extant depictions of this scene is the Röttgen Pietà, which comes from fourteenth-century Germany, when many mothers, if they were brave enough, would have been holding the dying bodies of their children succumbing to the Black Death. This early Pietà is contorted in grief; Mary’s mouth is open, Christ’s body shrunken and strange. Eventually this grief will come to us in the accomplished austerity of Michelangelo. Here, however, it remains raw.

Like the crucifixion itself, the Pietà is an image of the love which pours forth for the world and which is revealed in the depth of suffering. Where Jesus offers his salvific blood, Mary offers her tears, weeping for her son, for herself, for those who have lost him, and for those who killed him; it’s an image by which I am consoled even as I am implicated. As an alternate form of the “Hail Mary” puts it:

Hail Mary, full of sorrows, the Crucified is with thee; tearful art thou amongst women, and tearful is the fruit of thy womb, Jesus. Holy Mary, mother of the Crucified, give tears to us, crucifiers of thy Son, now, and at the hour of our death. Amen.

Who are we in the Pietà? Are we the mourners, the mourned, or those who caused this situation to happen? There’s not a single answer to this question, which is part of its value as an image. Since we can’t situate ourselves to it in a permanent way, we have to keep coming back to understand it anew.

Reading the comments under the Washington Post article about Marco Antonio Muñoz, the father who killed himself, one finds the usual mix of contempt and anger expressed in all directions. There’s the usual liberal pieties—if only Trump had lost, nothing like this would have ever happened, and so on. There are also many that don’t express sympathy at all. “A well known psychiatric fact is that nearly all people who are suicidal are also homicidal. These are dangerous people,” goes one.

The most interesting, however, from my perspective, is this one:

How many of them are you willing to take before you realize we are overloaded? If you were on a lifeboat with your own children and desperate people kept trying to climb on board, at what point would you realize that in order for your own children to survive, you would have to start beating people like this "poor, poor man" and his family off your lifeboat or throw your own children into the sea to allow his to climb on, or the lifeboat would sink? I am NOT willing to throw my children, or my grandchildren, or even my neighbors, into the sea to allow these migrants who would not fight for their own place in their own country to take MINE, or my children's. The lifeboat is FULL.

There are many possible responses to this—practical, idealistic, wonky in various degrees, meant to demonstrate this or that truth about the capacity of the lifeboat or whether “lifeboat” is really the right analogy in the first place. But the fear expressed by those who see themselves as being in the lifeboat is real, even if comical when placed alongside the fear of those who are drowning. If this commenter is religious, I suspect religion is not used as a justification for this stance so much as irrelevant to it: religion is for many things, but it’s certainly of no use in lifeboats. No atheists in foxholes, no Christians in times of scarcity.

There are a few Christian responses to the lifeboat image, one of which might be that Christ himself states that there are obligations that surpass those we have to our families. Another might be this: Mary is everyone’s mother, not only Christ’s, a thought that I admit I am only barely beginning to understand. But one can present this image, of her holding the body of her son, as a kind of counterpoint to the love that must tighten around its object to the exclusion of others. Mary’s love contracts to a single point of immense pain. It could stay there. Instead, her love expands and continues to expand, weakening never, only deepening as it comes to encompass all of us.

B. D. McClay is senior editor of the Hedgehog Review, and a contributing writer to Commonweal. She lives in New York.