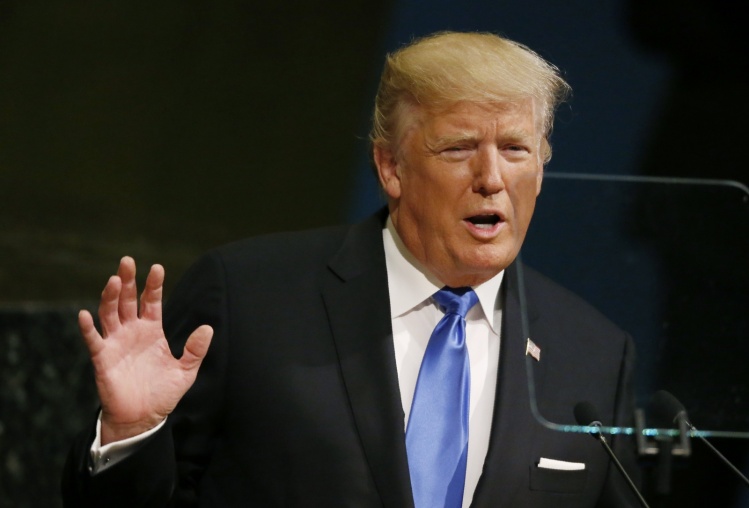 During last year’s presidential campaign, Donald Trump’s penchant for mean nicknames and juvenile insults was a source of fascination and morbid amusement. Since the election, it’s become an object of growing concern, even for members of his own staff. Instead of putting aside childish things and assuming the dignity of his office, Trump has given new meaning to the term “bully pulpit,” abusing his position to attack not only his political rivals in Washington, but also mayors, movie stars, and professional athletes. His grudges seem to grow pettier and more obsessive by the day, distracting him and the country from more important matters.

Recently, though, his trash talk has become something much worse than a distraction. After telling reporters in August that any further threats from North Korea would be met “with fire and fury like the world has never seen,” Trump used his first speech at the United Nations to taunt and threaten the country’s thirty-three-year-old leader, Kim Jong-un: “Rocket Man is on a suicide mission for himself, and for his regime.” Three days later, Kim responded in kind, calling Trump a “mentally deranged U.S. dotard” and promising to “tame” him. In Kim, Trump has found an adversary as thin-skinned, bombastic, and impetuous as himself—though, in fairness to Trump, Kim’s preferred method of revenge is not the intemperate tweetstorm but public execution.

Talk of “fire and fury” may sound strange coming from a U.S. president, but it’s the sort of thing we’re used to hearing from North Korean dictators. Until this year their routine threats to reduce America to ashes seemed mostly empty. Then in July came two successful tests of intercontinental ballistic missiles, one of which indicated that North Korea might now be capable of striking the U.S. mainland. This was followed in September by the underground detonation of a nuclear bomb seven times the size of the one dropped on Hiroshima. U.S. intelligence agencies now believe that North Korea will soon be able to miniaturize a nuclear weapon so that an ICBM can carry it at least as far as Los Angeles.

For several decades, the United States has used a combination of deterrence, diplomacy, and economic sanctions to try to prevent North Korea from acquiring nuclear weapons and long-range missiles. In 2000 the Clinton administration came very close to securing an agreement from Pyongyang to freeze its missile program in exchange for aid and a possible normalization of relations. But George W. Bush wanted nothing to do with Clinton’s Agreed Framework or his pledge of “no hostile intent.” After the September 11 terrorist attacks, Bush underscored his administration’s hostility to North Korea by including it in his “Axis of Evil,” along with Iran and Iraq. But what really decided North Korea against ending its nuclear-weapons program was not the Bush administration’s moral condemnation so much as the examples of Saddam Hussein and Muammar Qaddafi, who, having given up their weapons of mass destruction, were removed from power and killed. It is not irrational for Kim Jong-un to suppose that, without nuclear leverage, he would suffer the same fate.

So what, if anything, can be done now? There is still a chance that tightening economic pressure will eventually force North Korea to reconsider its position, especially if China continues to step up its enforcement of UN sanctions. But if any country can withstand material hardship, it may be North Korea, whose population has been trained to accept deprivation as the price of patriotism. A preventive strike might succeed in destroying all or most of North Korea’s nuclear weapons, but it would almost certainly provoke an immediate retaliation against South Korea and Japan. Seoul, a city of ten million people only thirty miles from the border with North Korea, would be decimated by heavy artillery. With nothing left to lose, Kim might also resort to his store of chemical and biological weapons. Hundreds of thousands, if not millions, of lives would be lost.

The best of the bad options available remains diplomatic engagement. The model should be the Iran nuclear deal, which is working quite well, much to the disappointment of President Trump, who has called it “the dumbest deal…in the history of deal-making” and is still looking for an excuse to scrap it. He now seems intent on sabotaging every effort to broker a similar deal with the North Koreans. When his secretary of state, Rex Tillerson, recently announced that Washington had direct lines of communication to Pyonyang and was still interested in resolving the crisis through talks, Trump quickly contradicted him, tweeting that Tillerson was “wasting his time trying to negotiate” with Kim Jong-un. “Save your energy, Rex, we’ll do what has to be done!” That kind of reality-television bluster could easily inflame Kim’s paranoia and lead to an unintentional escalation of hostilities. Trump’s cabinet must remind him as often as necessary that his task is not to humiliate Kim or to show off his own toughness but to prevent an isolated dictatorship from plunging the world into a nuclear war.