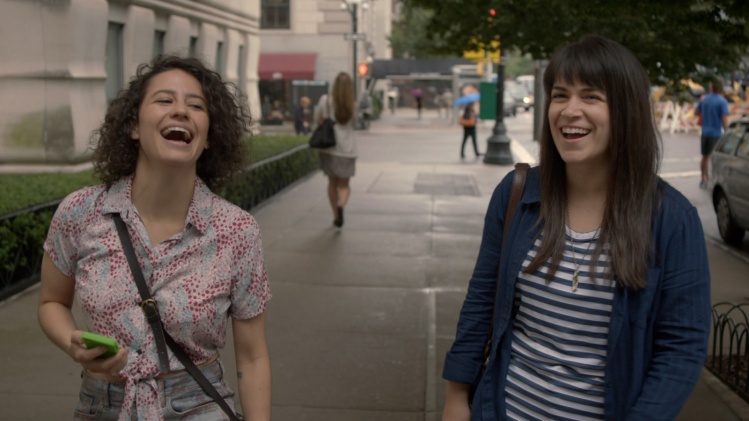 Broad City has been in the news in anticipation of its fourth season, which premiers in August on Comedy Central and Hulu. In the first three seasons, creators and stars Abbi Jacobson and Ilana Glazer have made a point of countering the superficiality of “girl-power” feminism, albeit with one glaring exception (a cameo by Hillary Clinton, which I’ll get to shortly.) Jacobson and Glazer play younger versions of themselves: two Jewish-American twenty-something women in Brooklyn. Together they stumble into wacky situations, get really high, coach each other through hookups, and do as little work at their terrible jobs as possible. They celebrate each other’s successes (which can be as minor as surviving the subway, or as major as getting Abbi’s paintings into a gallery) and entertain each other through hard times (like getting conned out of $200 by a creepy man-baby, or realizing that Abbi’s “gallery” is really just a sandwich shop).

In their everyday lives, Abbi and Ilana expose the problems with the faux feminism of the upper class. Women are encouraged to “lean in” by projecting ambition, competence, and responsibility to achieve material success. But Broad City’s feminism is less worried about saying the right lines and appearing independent than letting women be who they are—people with needs and imperfections.

Lucky for us, who they are in public doesn’t diverge too much from who they are in private. On the most basic level, Abbi and Ilana are regularly sort of gross—on camera they go to the bathroom, tweeze their pubic hair, and do other things when no one is supposed to be looking. But the women’s loud, obsessive love for each other is the best thing that they don’t have to hide. Women’s characters are often written to undermine or compete with each other, or to dissolve into emotional puddles while the main characters move the plot forward. But Abbi and Ilana show us a strong, healthy friendship between women. They’re honest about their flaws, don’t hesitate to ask each other for support, and know how to have mindless fun together. They’re each other’s biggest fan.

Nick Paumgarten at The New Yorker observes: “Abbi and Ilana embody the freedom, debauchery, ineptitude, and fellowship that people, particularly young women, must give up, or at least hide from view, in order to function as adults.” On television and in real life, strong women have to be responsible and competent, free of needs and totally in control. They roll their eyes at men’s antics and clean up other people’s messes. On Broad City, they’re at their mess-making best.

Abbi and Ilana show us a strong, healthy friendship between women
sharetweet

And so, given the show’s achievements, I was disappointed by the fangirling about Hillary Clinton. In the episode in which she appears, Ilana finds herself volunteering for a day in the call center for the candidate’s 2016 presidential campaign. When Clinton drops by the volunteer office unexpectedly, Ilana and Abbi are star-struck, gasping and gaping as Clinton strides in with a wink. As the credits roll, Abbi and Ilana rest their heads on Clinton’s shoulders, sighing that “this feels right.”

Clinton’s campaign adorned itself with superstar women like herself—Sheryl Sandberg, Gloria Steinem, Beyoncé, Katy Perry, to name a few—and in the end showed the limits of “girl power” feminism. The pursuit of material success under the guise of “sisterhood” is just the kind of superficiality I’d hoped Abbi and Ilana would lead us away from.

Glazer says that after Clinton’s loss, she and Jacobson rewrote season four significantly. They’ve also stirred controversy by announcing they’ll bleep Donald Trump’s name from episodes (“we don’t have airtime” for him, Glazer said in an interview.) Although I support the impulse to deny Trump more attention than he already gets, this strikes me as an empty gesture (one writer called it “tokenistic”), more self-congratulatory than constructive. Thus it’s with cautious expectation that I look forward to Broad City’s return. Abbi and Ilana—gross, sweet, and carefree—have so far defied faux feminism hilariously. I hope they continue to.