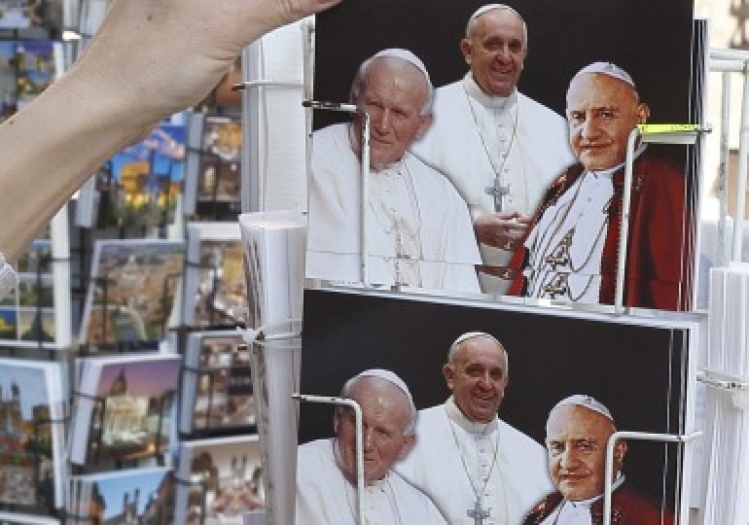 Thanks to the popularity of Pope Francis and his decision to canonize John XXIII and John Paul II at the same time, the news about Catholicism has been focused with even more intensity than usual on the papacy. The popular media tends to reduce the church to either the romance or the scandal of the popes. In either case, the coverage is often breathless. Yet whatever one thinks about the papacy—whether one sees it as an anachronism or as a guarantor of the Gospel’s integrity—there is no doubt that a remarkable succession of gifted men has occupied the chair of Peter in recent decades. If they were not all saints, they were undeniably men of rare spiritual authority. And Francis—who likes to identify himself not as a priest or bishop but as “a sinner”—appears to be cut from the same sturdy cloth.

Francis’s penchant for seemingly off-the-cuff remarks (“Who am I to judge?”) and his determination to shed much of the papacy’s regal trappings have made him a hero to many, while raising suspicion among some traditionalists. What seems increasingly clear, however, is that Francis has taken the reform mandate given him by the conclave that elected him and run with it. He also wants to place the mercy of the Gospel, rather than its strictures, front and center. This has made him immensely appealing to both Catholics and those outside the church, but it remains to be seen if this more conciliatory style of governance will help overcome the church’s internal divisions.

Despite official denials from the Vatican, there is little doubt that Francis’s decision to canonize John XXIII and John Paul II at the same time is part of a broader effort to reconcile warring factions within Catholicism. This aim was manifest in Francis’s homily during the canonization Mass, where he boldly enlisted the legacies of his two predecessors in support of his upcoming Synod on the Family. Pope John was open to and guided by the Holy Spirit in an unprecedented way, Francis noted, while John Paul II wanted to be remembered as “the pope of the family.” Shrewdly uniting these complementary visions, Francis insisted that the upcoming synod would be “open to the Holy Spirit in pastoral service to the family.”

In calling the synod, Francis has raised the expectation that the church will readmit divorced and remarried Catholics to Communion. This in turn has heightened the fears of some that Francis will alter church doctrine on the indissolubility of marriage. Certainly the pope’s call for “pastoral service” and “divine mercy” suggests that he thinks this is an issue where the church has erred on the side of legalism, and he ended his homily by characteristically urging the synod to embrace the “mystery” of God’s infinite forgiveness.

Francis is equally engaged on other fronts. Reform of the Vatican bank and the financial operations of the Curia are well underway. Preparations for the upcoming synod indicate that Francis hopes to make good on the Second Vatican Council’s promise of episcopal collegiality. Bishops are being encouraged to speak their minds and consult with the laity. Similarly, Francis’s appointments of cardinals and bishops have shown a preference for those with pastoral or diplomatic experience. He has famously remarked that he wants shepherds who smell of their sheep, and the sacking of the German Bishop Franz-Peter Tebartz-van Elst, known as the “Bishop of Bling,” has sent an unmistakable message in that regard. Many are now wondering if Francis will move with similar dispatch against bishops who have covered up the sexual abuse of children.

Paul Vallely, the author of Pope Francis: Untying the Knots, and the Boston Globe’s John Allen were recently at the Ethics and Public Policy Center’s Faith Angle Forum to assess the first year of Francis’s pontificate. Both seasoned journalists dismissed the notion that Francis is pursuing fundamental doctrinal change. The pope’s real agenda, shaped by his experience as Jesuit provincial and archbishop in Argentina, is consonant with both the letter and the spirit of Vatican II. “One thing he’s concerned about,” Vallely explained, “is that the church doesn’t make decisions in the right way, and that is more important to him than what the decisions are.” Both Vallely and Allen agree that, with Francis, style is substance. “You can change the Catholic Church profoundly without changing a single comma in its official code of teaching,” Allen said. “These gestures are not just spontaneous, and they’re not one-off. They’re a program of governance in miniature.”

The most profound changes brought about by the Second Vatican Council were not essentially doctrinal. Rather, change had to do with how the church presented itself and its teachings to both the faithful and the larger world. By rejecting condemnations and anathemas, embracing other Christians and those of other faiths, and opening a dialogue with modernity, the council transformed the church without altering its fundamental message or character. Francis will need all the spiritual authority of his office if his welcome style of governance is to bring to fruition the transformation initiated by the council.

Bacevich on Trump, Clinton, and 'the Failure of American Liberalism'