The Story Behind the Statues 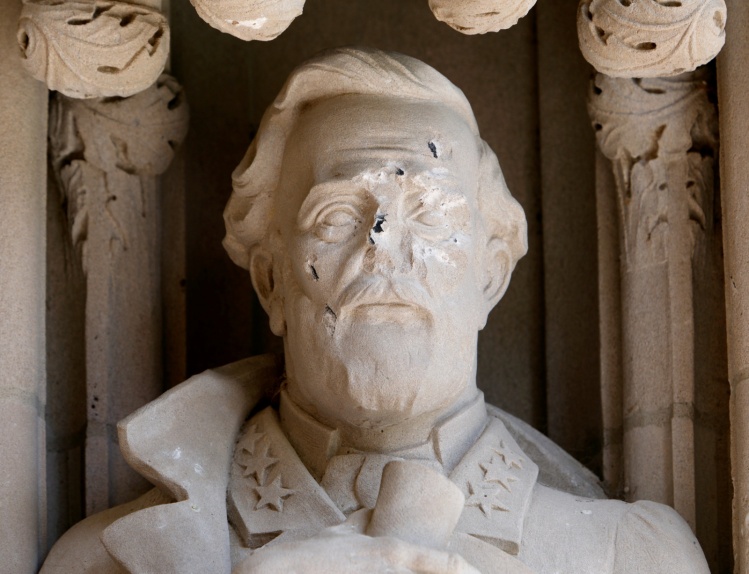 Damage is seen to the face of a statue of Robert E. Lee, a Confederate military general, at Duke Chapel in Durham, N.C., Aug. 17. (CNS photo/Jonathan Drake, Reuters)

Not far from a Brooklyn apartment where I used to live, there is a quaint house which once was the home of Gen. Robert E. Lee. It is located on General Lee Avenue at Fort Hamilton, marked with a plaque. Down the street from the fort’s entrance, an Episcopal church recently removed a plaque noting that Lee had planted a tree there. Confederate Gen. Thomas “Stonewall” Jackson was baptized in the same church, and a street is named for him on the fort’s grounds.

These markers had always seemed to be more a matter of historical information and local color than the stuff of a great national debate—but that’s no longer the case. Three members of Congress arrived nearby the fort recently to call for the Army to change the street names, and to advocate legislation requiring the Defense Department to re-name any military property named for a supporter of the Confederacy.

The Army objected. “The men in question were honored on Fort Hamilton as individuals, not as representatives of any particular cause or ideology,” a senior Army official wrote to one of the members of Congress in behalf of Acting Army Secretary Robert M. Speer. “After over a century, any effort to rename memorializations on Fort Hamilton would be controversial and divisive.” That’s in line with President Donald Trump’s tweet-announcement on the subject:

Sad to see the history and culture of our great country being ripped apart with the removal of our beautiful statues and monuments. You.....

..can't change history, but you can learn from it. Robert E Lee, Stonewall Jackson - who's next, Washington, Jefferson? So foolish! Also…

..the beauty that is being taken out of our cities, towns and parks will be greatly missed and never able to be comparably replaced!

But the truth is that many of the memorials to Lee and Jackson were the direct result of a very deliberate campaign to advance a “particular cause or ideology.” That’s clear from the historical record.

In fact, these monuments tell a specific historical story. They recall not only the individuals depicted, but also how Southern aristocrats used their legacy as part of a grand effort to transform the military defeat of the Civil War into a political and cultural victory.

Historians call that effort the “Lost Cause” of the Confederacy, and it explains why the speaker who officially presented the Lee statue in Charlottesville in 1924 asserted that “the real victor” at Appomattox was not Gen. Ulysses S. Grant, but Lee, whose “defeat was but apparent.”

The group’s ideological agenda was discussed forthrightly at its early national conventions and in its publications. It is especially clear in the writings and statements of Adelia A. Dunovant, chairwoman for the historical committee of the Daughters of the Confederacy.

In a speech before the Fifth Annual Convention at Hot Springs, Ark. in 1898, Dunovant said Southern history must be preserved to protect “constitutional liberty”—which to her meant that the 13th, 14th and 15th amendments to the Constitution were passed illegally. These amendments abolished slavery; extended “equal protection under the laws” to all (and allowed Congress to further that, which it did in the Civil Rights Act of 1964); and barred states from disenfranchising voters “on account of race, color, or previous condition of servitude.”

Her view of states’ rights led her to declare that United States of America was not to be called a “nation” because it was a collection of sovereign states. Following on this, she argued that Abraham Lincoln had violated the Constitution, while Jefferson Davis was its defender. The North had followed the war with a “conquest of opinion” by falsely labeling the Confederates as “rebels” and by calling the conflict a “civil war,” she contended. The way to reverse the conquest, she said, was to preserve Confederate principles and then apply them.

The way to reverse the conquest, she said, was to preserve Confederate principles and then apply them.
sharetweet

Why build monuments to Confederate heroes? This was her answer:

Our association is properly not only one of historic memories, but of vital present interest; not only one of sentiment, but of utility. History should be made to serve its true purpose by bringing its lessons into the present and using them as a guide to the future.

…. It seems to me that our error lies in embalming, as it were, historic truths and putting them away in the tomb of the Confederacy—making them as devoid of energizing influence as an Egyptian mummy—instead of bringing them and keeping them ever before us in the vital, living present. Memory is not a passivity, but an ever active faculty.

Dunovant’s insistence that it’s wrong to call the United States a “nation” is reflected in the name of the United Daughters of the Confederacy.  The association was initially called the National Daughters of the Confederacy when it was founded in 1894, but that was changed the following year. When a Connecticut delegate proposed reverting to that name at the 1898 meeting, Dunovant and the South Carolina woman who initially advocated the name change jumped up to object, the minutes show. “The United States has never been a nation, either in the past or in the present,” Dunovant said. “The sovereignty of the States is still sustained by the constitutions of the United States and the States and by the laws of the country—both Federal and State.” In other words, she argued successfully that calling the group “national” would contradict its mission.

I don’t doubt that the United Daughters have done valuable charitable work over the years.  The current members, descendants of Confederate soldiers and sailors, are no doubt shocked to see what they view as a well-meaning cultural activity coming under attack across the nation. The president general, Patricia M. Bryson, posted a statement online condemning “any individual or group that promotes racial divisiveness or white supremacy,” adding, “and we call on these people to cease using Confederate symbols for their abhorrent and reprehensible purposes.”

I would say, preserve history, but first understand it. Understand the context for the plaque outside Lee’s Brooklyn residence, placed there by the United Daughters of the Confederacy, as was the one on the tree outside the local church Lee attended.

Understand the context for the statue of Lee in Charlottesville, also.

The United Daughters did not fund that one, but it was very much a part of their mission. Paul McIntire, a local philanthropist who returned to the city after making a fortune on Wall Street, paid for it. It was unveiled as part of a three-day reunion of the Sons of the Confederate Veterans and a group of Confederate veterans from Virginia.  The Daughters of the Confederacy were invited as participants. A transcript of the reunion shows that if you can make your way through the meadows of flowery oratory invoked in Lee’s behalf during those three days, the Lost Cause political-cultural agenda that Miss Dunovant urged was still underfoot.

As the convention opened, C.B. Linney, grand commander of the Sons of the Confederacy, defended the Southern cause. “Justification under the constitution is our defense,” he said. “There we leave the Cause with the unbiased historian who will, in time, accord us due mead of praise and an honorable verdict.”

W. McDonald Lee, commander-in-chief of the Sons of Confederate Veterans, boasted that publishers were clearing their history textbooks with the groups gathered at the convention. What this meant is that schoolchildren were taught that slavery in the South was a benevolent institution.  The Ku Klux Klan, which was resurgent in the 1920s, was cast in a positive light.

The commander wanted publishers to do the same for all editions, not just for the versions sold in the South. “We are not only continuing that warfare in the South, excluding unfair histories, but are carrying it into the North, into the West, and even the East,” he said.

On morning of May 21, 1924, Unveiling Day, “All business was suspended, and everybody in the city and all the guests took part in one way or another in what many regard as the greatest pageant that ever moved through the streets of Charlottesville.”

Dr. Henry Louis Smith, president of Washington and Lee University, which Robert E. Lee headed after the war, did the honors of presenting the statue in behalf of McIntire. After much praise of “Lee the Christian saint,” he worked his way up to his point: “Greater to me than Lee the Soldier, or Lee the Educator, is Lee the Victor over Defeat.”

“His gigantic efforts had come to nought, his military career had ended in hopeless defeat, his might armies had been shattered,” he said, adding that Lee “was stripped of rank and power in an obscure mountain village, was supervising the conduct and studies of a handful of college boys.”

“His defeat was but apparent. Long since has the impartial verdict of the slow-moving years crowned as the real victor of Appomattox not Ulysses S. Grant and his swarming armies, but the undefeated spirit of Robert E. Lee. His surrender was temporary. Long since have his enemies and detractors surrendered in their turn to this hero of defeat. His name and fame are growing with every passing year, their splendor heightened rather than obscured by this dark background of failure and disasters.”

It’s true, as Trump tweeted, that we can learn from history through these statues. One part of the lesson should get his close attention: that if we can understand what these monuments actually represented in the historical moment they were installed, we might better recognize how the Lost Cause ideology continues to echo in our nation to this day.