The continued relevance of Graham Greene’s The Quiet American was made clear once more thanks to Seymour Hersh's latest article in the London Review of Books. Hersh cites a highly classified report prepared by the Pentagon’s Joint Chiefs of Staff and the Defense Intelligence Agency that undermines Barack Obama’s repeated assertions that there are moderate forces capable of defeating Syrian president Bashar al-Assad. “The assessment,” he writes, “was bleak: there was no viable ‘moderate’ opposition to Assad, and the U.S. was arming extremists.”

A mythical “moderate” force is at the center of Greene’s novel. France’s intervention to maintain Vietnam within its sphere of influence after the Second World War is coming to an end, and a few vanguard Americans are actively supporting an apparently benevolent “third force” opposed to both French colonialism and communism. Thomas Fowler is a cynical British war correspondent who befriends one of these Americans, Alden Pyle, an idealist who is determined to do good “not to any individual person, but to a country, a continent, a world.” Pyle is the perfect foil to the world-weary Fowler. When Fowler discovers the truth about Pyle and his much-hyped “third force,” Fowler is forced to choose between remaining a jaded observer or participating in the conflict.

Within the geopolitical triangle, there is a love triangle involving Fowler, Pyle, and a local Vietnamese woman, Phuong. This adds an element of ambiguity to the characters and keeps the story from being a simple parable. But Greene does have a message: if you believe in the essential goodness of American intervention abroad, then it is easy, perhaps necessary, to think that there are significant local forces that will share American goals--never mind intelligence reports to the contrary. Greene responds to this imperial hubris in The Quiet American, and the epigraph indicates which side he is on: “This is the patent age of new inventions/For killing bodies, and for saving souls,/All propagated with the best intentions.” 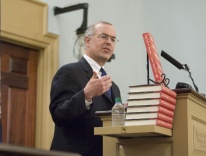 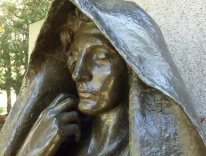