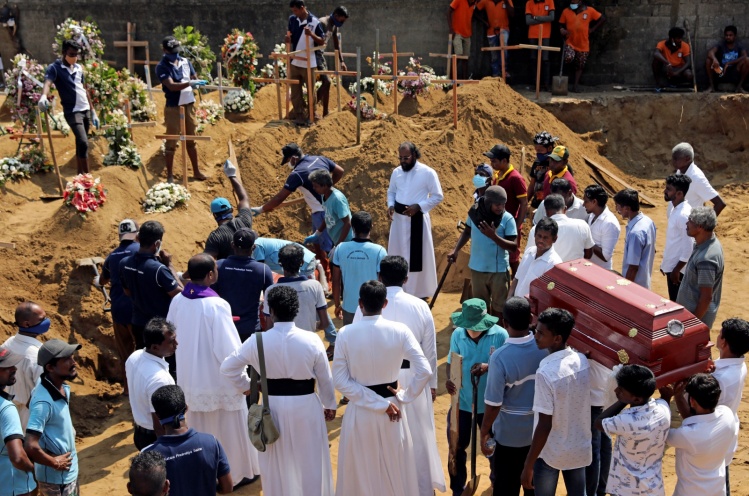 People attend the burial of eight-month-old Mathew in Negombo, Sri Lanka, April 24, 2019, three days after a string of suicide bomb attacks on churches and luxury hotels across the island (CNS photo/Athit Perawongmetha, Reuters)

On the morning of Easter Sunday, April 21, a man walked into St. Anthony’s Shrine in the Sri Lankan capital of Colombo, and detonated a bomb during Mass, killing at least fifty people. At almost exactly the same moment twenty miles away, another suicide bomber killed over a hundred worshippers at a church in the predominantly Catholic city of Negombo. Twenty minutes later, a third terrorist, prevented from entering a Protestant church in Batticaloa, blew himself up outside the building, killing twenty-five people, including both churchgoers and passersby. In the next few hours terrorists would also strike three Sri Lankan hotels that cater to foreign tourists. By the time it was over, the wave of coordinated bombings had killed more than 250 people and injured hundreds more, making it one of the deadliest attacks since 9/11. The suicide bombers were all members of a small local Islamist group called the National Thowheed Jama’ath, but authorities believe they were working with the Islamic State, which has taken responsibility for the attacks.

Were it not for egregious failures on the part of Sri Lanka’s security forces, it might all have been prevented. Indian officials had warned the Sri Lankan police in early April that local jihadists were planning a major operation targeting Christian churches, but the warning never made it to Sri Lanka’s prime minister, Ranil Wickremesinghe. The entire government seemed to be caught off guard. Sri Lanka is used to dealing with mob attacks by Sinhalese Buddhists against religious minorities—including both Muslims and Christians—or bombings orchestrated by Tamil-speaking rebels (mostly Hindus). But this was different. Until recently, there had been little conflict between the Muslim and Christian communities, which together make up less than 20 percent of the population.

Still, surprising as the Easter attacks may have been to Sri Lanka’s leaders, they fit all too well into two alarming patterns of the past decade. The first is regional. South Asia has lately become a hotbed of Islamic extremism. Bangladesh has in recent years been wracked by jihadist attacks. According the Economist, the Maldives sent a greater portion of its population as recruits to ISIS than any other country in the world. We have to stop assuming that Islamist terrorists are all Arabs.

The best cure for the persecution complex of Christians here is closer attention to what real persecution looks like elsewhere.
sharetweet

The second pattern is worldwide. Easter attacks on Christians in Nigeria killed more than forty people this year; in 2012 a car bombing in that country, widely attributed to the Boko Haram (otherwise known as the Islamic State in West Africa), killed dozens of worshipers at an Easter service. On Palm Sunday 2017, members of an Islamic State brigade bombed two Coptic churches in Egypt. The year before that, a suicide bomber attacked Christians celebrating Easter at a park in Lahore, Pakistan. The list is long and the cases so similar that they all tend to get confused in the Western public’s memory. But it’s worth trying to keep count, lest this series of carefully orchestrated Holy Week massacres be reduced to a random set of isolated disasters. The timing of these attacks was not trivial. Nor was it only tactical—a matter of waiting for the day when many churches are at their fullest in order to do as much harm as possible. The timing was also symbolic, calculated to produce maximum outrage. The Easter attacks in Sri Lanka may have been intended as revenge for the mass shootings at mosques in New Zealand the month before, but their larger aim was to open a new front in a sectarian war between Muslims and non-Muslims.

In the United States, where some Christians have been too quick to claim martyrdom when faced with any sign of disapproval or inconvenience, it can be easy to forget that in many other parts of the world—in the Middle East and South Asia, in China and much of Africa—Christians really are a persecuted minority, now more than ever. We can acknowledge this, and respond to it, without yielding to the temptation of retribution or taking credit for our coreligionists’ heroic courage. It may be that the best cure for the persecution complex of Christians here is closer attention to what real persecution looks like elsewhere.

As for the rest of us—comfortable, wised-up Western Christians not inclined to pose as martyrs—we tend to like our stories of martyrdom the way we like our miracles: as ancient and remote as possible, softened in the mists of legend. But the age of miracles is not past, and neither, alas, is the age of martyrdom. For now, it appears at a safe distance, but that’s not an excuse to ignore it. The least we can do is mourn and remember. If Christians are truly members of one Body, as we say we are, then events like the one in Sri Lanka ought to hurt. We must not be so embarrassed by martyrdom as an anachronism that we fail to lament it as a continuing reality.