The Spirit on the Ground: Pope Francis' Mass in Amman 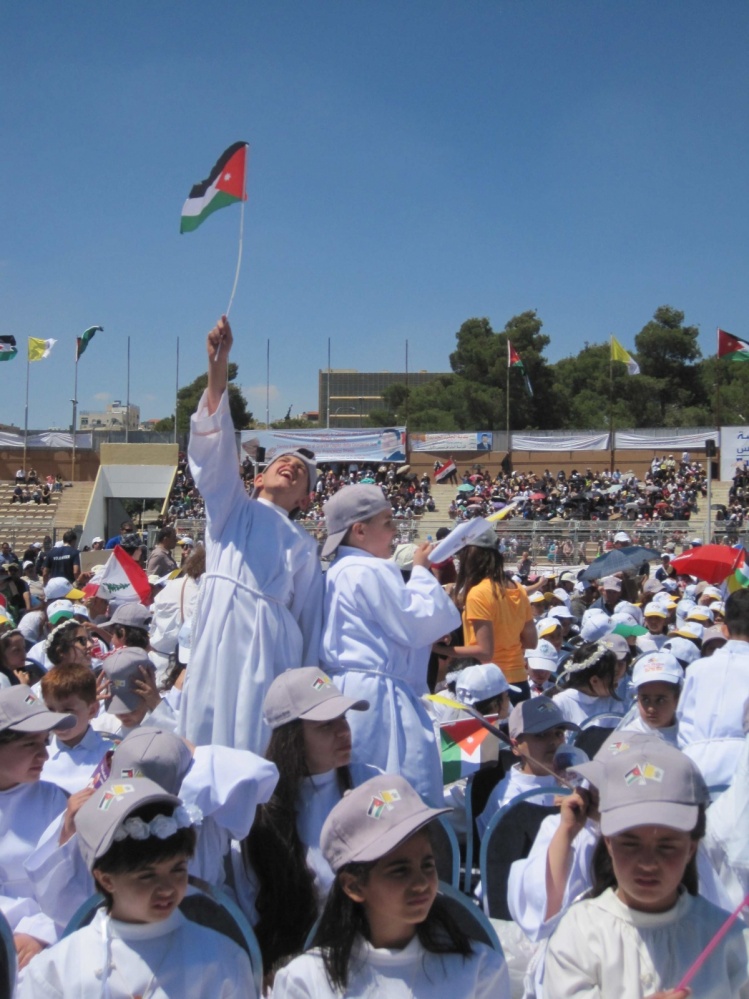 Queen Alia Street, a main thoroughfare in Amman, was packed with traffic on May 24th, the day of the Pope’s visit to the Hashemite Kingdom of Jordan. Vertical posters depicting important places in Jordan, like the site of Jesus’ baptism or the massive, blue King Abdullah I mosque, read “Joy and Hope” in Arabic and English. The flags of Jordan and the Vatican lined the overpasses and the walls of the Amman International Stadium where the Pope would say Mass later in the afternoon.

These decorations appeared just days before the Pope’s visit, but signs of his impending arrival were visible throughout Amman for the preceding weeks: curbs received a fresh coat of yellow and black paint, and images of Jordan’s King Abdullah and Pope Francis shaking hands were posted throughout the city. Jordanians, both Christian and Muslim, were excited not only to receive Francis—the fourth pope to visit them in fifty years—but also to use the opportunity to showcase their country’s long history of Muslim-Christian coexistence.

Along with 30,000 other Jordanians—mostly Christians but some Muslims—I attended the Mass over which Francis presided. Because I taught religious education classes for our English-language parish in Amman, I was able to sit on the grassy, ground level of the stadium with the families of the First Communicants, who would be receiving their First Eucharist at the Mass. I had a clear view of the altar and its big, yellow tent, and was able to walk around the field easily, greeting friends and fellow parishioners in the four hours before the liturgy.

As we waited in the hot sun for the Pope to arrive, Fr. Bashir Badr, a friend and Roman Catholic priest, served as an emcee, leading the congregation in chanting and singing. We yelled, “Long live the king!” and "Viva il papa!", sang along to well-known Arabic liturgical hymns, and learned the words to songs written especially for the visit of the Pope. Children let balloons fly into the sky, including two large balloon rosaries, one blue, one pink.

When the Pope arrived, we all ran to the edge of the track that encircled the field.

He drove around slowly in the Popemobile, occasionally stopping to shake hands and kiss heads of babies, as is his routine. His face was cheery and bright, a stark contrast from the wearier disposition he wore throughout the Mass.

The Mass was celebrated in a mix of Italian and Arabic. We sometimes got lost, not knowing when to utter our appropriate Arabic responses to Francis’ Italian portions. Francis delivered his homily in Italian, and then it was translated into Arabic. While I caught bits and pieces of it, I didn’t digest the full meaning of Francis’ remarks until I read the homily later that night in English. His words about the Holy Spirit, who somehow creates harmony out of diversity, reminded me of the sunny hours spent walking around the field before the Mass, observing the diversity of peoples who were present there.

“The mission of the Holy Spirit, in fact, is to beget harmony – he is himself harmony – and to create peace in different situations and between different people. Diversity of ideas and persons should not trigger rejection or prove an obstacle, for variety always enriches.”

The Catholic community in Jordan is more diverse than many might assume. Though most Catholics in Jordan are local Arabs, many Catholics from other countries make a home here, particularly in Sacred Heart, an English-language parish run by American Jesuits from the Northeast province. Every Sunday, I line up with Catholics from the United States, Europe, Australia, the Philippines, East Africa and elsewhere to receive the Eucharist. We might have different traditions, styles, and devotional practices, but we have become a rag-tag family of sorts, and I enjoyed running into parishioners here and there as I walked around the field. A Spaniard family from the parish sat across the aisle from me, and the mother propped her black lace mantilla on her head. Cynthia, from India, excitedly rushed toward me after the Mass to tell me that the Pope had touched her hand.

Many of the Arab Catholics in the crowd were not from Jordan. Some were from Lebanon, others from Egypt. Many from Iraq, Syria, and Palestine are refugees. Their flags flew alongside Jordanian ones. I was especially struck by the Iraqi flag, which bears the phrase “Allahu Akbar,” which means “God is greater.” Though traditionally an Islamic expression used to open prayer, I was struck by its appropriateness at this Mass, where diverse Catholics (in addition to Muslims and other Christians) were gathered. I thought about how God is bigger than our differences, and about how the Holy Spirit helps us embrace and overcome our differences.

“We can say that the Holy Spirit carries out three actions – he prepares, he anoints and he sends.”

Many of those in the crowd were children receiving their First Communion. Their outfits were simpler than the elaborate (and expensive) ones worn in the U.S. Both the boys and girls wore simple white frock with a cross around their neck, and girls wore the traditional white wreath or light veil. But they also got to add fun, patriotic accessories. To guard their faces from the sun, they wore baseball caps with the Jordanian and Vatican flags on them. They draped Jordanian red and white scarfs around their shoulders, just like the religious sisters who watched over them.

None of the 1,000-plus children received the Eucharist directly from the Pope himself, but did so in his presence. Many didn’t realize what a special treat the opportunity was for them. One girl asked her mother, “Mom, when you had your First Communion, which Pope did you get?” Her mom replied that it doesn’t work that way.

A few students in the congregation had another sacrament on their minds—their recent Confirmation. A friend and I taught Confirmation preparation classes to five students in the English-language parish: two Filipinos, two Italians, and a Spaniard. As I read the homily, I was reminded of the anointing they received during the sacrament, and how it made my high-school senior, Freddy, tear up. I spotted some of them at the Mass, and hoped they were able to understand the Italian or Arabic versions of the homily, to be reminded of the sacrament they received just weeks ago. I hoped they felt prepared by our year-long course to be sent forth in the world, carrying the Holy Spirit with them.

“Let us ask the Spirit to prepare our hearts to encounter our brothers and sisters, so that we may overcome our differences rooted in political thinking, language, culture and religion. Let us ask him to anoint our whole being with the oil of his mercy, which heals the injuries caused by mistakes, misunderstandings and disputes.”

This, Pope Francis’ final plea, was echoed in a few short Arabic words written on the hats worn by almost everyone in the stadium: “That you may be one.” Usually, the statement is used to connote Christian unity, a desire for the reunification of the many Christian denominations. But here, it was used to signal more than that: interreligious unity. Pictures of the Muslim king and the Catholic pope, worn on the shirts of many attendees, were inscribed with these words, which Francis took as the motto for his trip to the Holy Land.

Those of us who followed the Pope’s gestures, remarks, and activities in Jordan, Palestine, and Israel can see now that his trip was about much more than Christian unity. It was about fostering harmony among the Abrahamic religions and all people. He set the stage for this journey in Amman, reminding us that this mission can only be achieved with the help of the Holy Spirit that permeates all of creation.

You can read more about Jordan's Christian population here.

Jordan Denari lives in Amman, Jordan where she researches Muslim-Christian relations on a Fulbright grant. She has contributed to TIME, America, the Washington Post's On Faith blog, Busted Halo, and elsewhere.

(Click on the "i" icon to read the captions on the photographs below.)