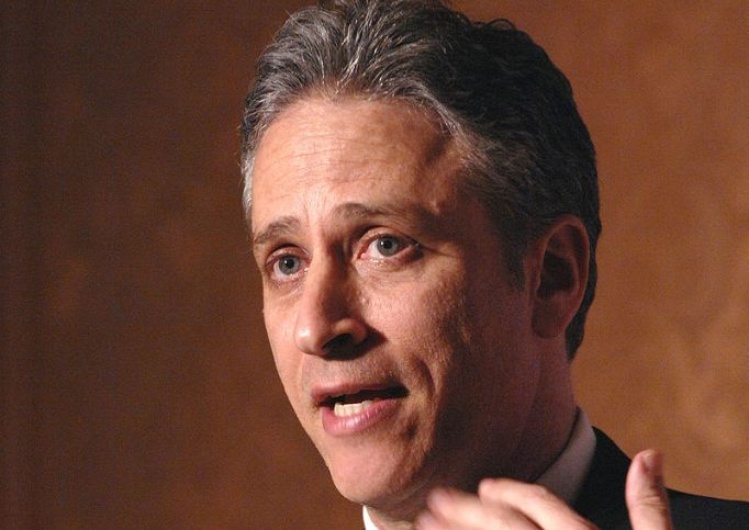 In August 2002, Vice President Dick Cheney told an interviewer there was “no doubt” that Saddam Hussein possessed weapons of mass destruction. Two weeks later the New York Times reported that Iraq had acquired aluminum tubes used in centrifuges to enrich uranium. Appearing on CNN the same morning, National Security Director Condoleezza Rice repeated an unnamed official’s quote from the story—“we don’t want the smoking gun to be a mushroom cloud”—an image soon prominent in the Bush administration’s increasingly dire warnings and duly passed along by the media. In February 2003, Secretary of State Colin Powell went before the United Nations with what was supposed to be evidence of Hussein’s weapons capabilities, making what the Washington Post pronounced an “irrefutable” case. On March 20, the war in Iraq began.

Jon Stewart, who recently announced his retirement as host of Comedy Central’s satirical news program The Daily Show, had been on the air for about four years by then, having already won a Peabody Award for coverage of the disputed 2000 presidential election. What had started as a humorous and hip take on the day’s events was evolving into something else, his sharp nightly riffs providing not just comic relief for an audience unnerved in the aftermath of 9/11, but also reliable doses of fact-based sanity amid the fear-mongering on Iraq. Stewart emerged as a figure to be taken seriously, projecting the kind of journalistic credibility the established media seemed to be losing. Its dereliction of duty in the run-up to the war was to that point perhaps the clearest demonstration of how the once-dominant television channels and national newspapers were losing authority and the public’s trust. They may have lost more since. You could blame a fractured marketplace and increasing competitive pressures, but the damage is also self-inflicted—whether it’s the timidity with which politically driven assertions are received and repeated, the bite-sized stories on celebrities and other sensational topics, or the fabrications that get reported as fact. The embellished memories of NBC’s Brian Williams are minor by comparison, if all too emblematic. A majority of Americans under the age of fifty who follow news get it from Stewart and other nontraditional sources. One couldn’t help but agree with PBS’s Judy Woodruff when she recently questioned the very relevance of the old guard as embodied by the network television news anchor.

Stewart has for more than a decade functioned as a valuable corrective to much of what’s wrong with mainstream news, especially political coverage that can’t seem to identify the radical intransigence of the Tea Party wing of the Republican Party for what it is. By intent or default, he established himself as a relentless fact-checker and watchdog, using research, video clips, and comedy to call out politicians and other public figures on their evasions, over-simplifications—and lies. That he so often confronts Fox News is no doubt his primary appeal for many viewers, but this shouldn’t be surprising. Fox is the leading source of information for a significant number of Americans, to whom it distributes a steady stream of blatant and potentially dangerous falsehoods, dozens of which Stewart recently compiled in a loop posted on his show’s website (2009: “People will go to jail if they don’t buy health insurance”; 2011: “Obama has accumulated more debt than forty-three presidents combined”; 2014: “Some doctors say Ebola can be transmitted through the air by sneeze or cough”). Though much of his fire is aimed at the right, he has also been critical of the Obama administration for its rollout of health-care reform, its response to the war in Syria, and its punishment of government whistleblowers: “Of the eleven times in our entire history that the Espionage Act has been used against government workers sharing information with journalists, seven of them have been under this presidency,” he noted in February.

A criticism of Stewart is that the style of his nightly reporting lets both him and the viewer off too easy: laughing agreement is no substitute for serious engagement with the issues of the day. But Stewart has also regularly devoted time to lengthier segments on issues given only cursory treatment by the networks, such as a 2012 discussion with Commonweal columnist Cathleen Kaveny about Catholic concerns over Obamacare’s contraception mandate. For his persistent reporting in 2010 on Republican obstruction of a bill pledging federal funds for the health care of 9/11 responders—a story the networks ignored for more than two months—he earned mention alongside a pair of golden-era giants: Syracuse University’s Robert J. Thompson compared Stewart’s work to that of Edward R. Murrow on Joe McCarthy and Walter Cronkite on Vietnam. Not bad for a comedian. Far from dumbing the news down, Stewart undeniably smartened it up.