The World of the Crusades 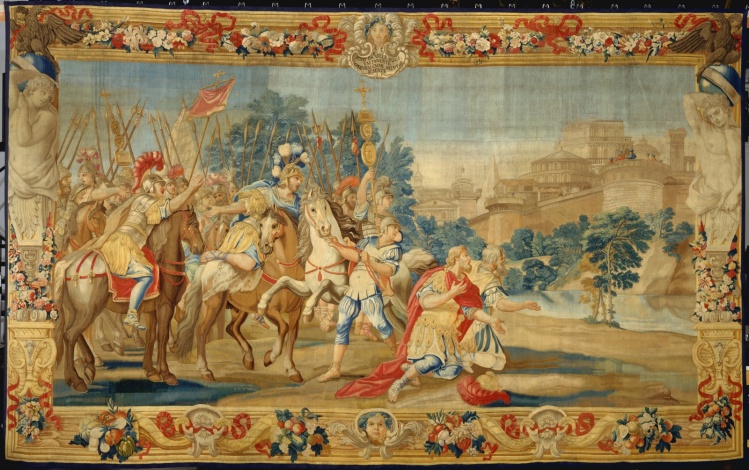 The Crusaders Reach Jerusalem (from a set of Scenes from Gerusalemme Liberata), tapestry by Domenico Paradisi, 1732-9 (Metropolitan Museum of Art)

Catholic schools used to—do they still?—nickname their athletic teams “Crusaders.” Jefferson spoke of a “crusade against ignorance.” Eisenhower called his World War II memoir Crusade in Europe. In recent decades we have had crusades against crime, drugs, and poverty, to name just a few targets. George W. Bush proclaimed a crusade against terror. The word generally had a positive valence. But now, among groups as diverse as ISIS, al-Qaeda, and Western progressives, the word is a slur. John Paul II even apologized for the Fourth Crusade (1215) that, instead of liberating Jerusalem, captured Constantinople. In recent years xenophobic crackpots of the so-called alt-right have embraced the crusades.

So what is a crusade, what were the crusades? In bare essentials, the crusades were a series of wars waged by European Christians against Muslims and pagans, and also against fellow Christians, in the Levant, of course, but also in Iberia, Italy, Southern France, the Balkans, Byzantium, and the Baltic. The so-called First Crusade—medieval people did not number the crusades; modern writers do—was preached in 1095 by Urban II, launched in 1096, and completed in 1099. The last crusade that met the technical requirements for crusading (see below) was launched by Pius II in 1463. Struggles against the Ottoman Turks down to the end of the seventeenth century bore some stamps of crusading. The crusades were, thus, the longest-lived phenomenon of the medieval Catholic world. It would be fair to guess that the crusades are one of the few things most people would mention if asked to say something about the Middle Ages.

With the death in 2016 of the Cambridge scholar Jonathan Riley-Smith, Christopher Tyerman assumed, by merit not by default, leadership among the world’s historians of the crusades. He is prolific. Readers of the book under review may wonder how it compares to his 2006 God’s War: A New History of the Crusades, which tipped the scales at 1,024 pages. The World of the Crusades is only half as long but it retains many features of the longer study. Both are based on a sovereign command of both sources and scholarship, and both seem to be addressed to general audiences more than to fellow specialists. Tyerman never argues with other scholars in his text and rarely does so in his notes. World moves at a livelier clip than God’s War and is more engagingly written. It is also festooned with features that will entertain and inform all readers: 161 images, almost all in color; seventeen maps; and thirty-nine essays of two to four pages called “The Crusades in Detail.” These treat, to pick just a few examples, Women and the Crusades, Plunder and Booty, Castles in Outremer, Paying Crusaders, Food and Drink, The Sociology of Crusading: Who Went?, The Children’s Crusade, and Medicine. Reading this book is as pleasurable as it is informative. I have been reading and teaching medieval history for fifty years. I wish I had cut my teeth on this book instead of Steven Runciman’s A History of the Crusades (1951–54).

Three themes run all the way through this book (and inform God’s War as well). The first is that the inception of the crusades drew upon a reservoir of enthusiasm for Holy War that persisted, now waxing, now waning, for some seven centuries. That enthusiasm was, at its core, fundamentally religious. The second is that each crusade can best be understood when set into its economic, social, political, and ecclesiastical context. The third is that geography matters: cascading turbulence in Western and Southern Europe, the Middle East, and the Baltic must be understood if the crusades are to be understood. Themes two and three generate Tyerman’s “world.” A further difference between God’s War and World is that the world is more central in the latter and war, in minute detail, more central in the former. Readers who want a blow-by-blow account of each crusading campaign will be happier with War.

Crusaders were not holy solitaries. They had to fit into dense networks of political and familial relationships.
sharetweet

Tyerman’s approach is basically chronological but only the First and Third Crusades (1187) get their own chapters. All the other crusades are embedded in chapters dealing with the three themes enumerated above. The book defies any attempt at brief summation. Tyerman begins by warning against the binary of Christian vs. Muslim, an excessive focus on the Holy Land, a perception of civilizational strife, and any attempt to relate the crusades to modern Palestine. Christians waged war in God’s name in Roman times, in the age of Charlemagne, and in tenth-century Germany. In the late eleventh century something new happened or perhaps more accurately coalesced: what we call the crusades. A crusade proper was always marked by specific preaching, vows, taking the cross, and concrete benefits. These benefits were both religious (remission of the temporal punishment for sin and later of sin itself) and secular (suspension of debts and lawsuits, and financial privileges, for example). Crusaders were crucesignati, signed by the cross, but there was never a single name for them or for the movement in which they participated. Crusade never achieved a specific sacramental or juristic definition. “Crusade,” in English and in other languages, is an eighteenth-century word.

A few of Tyerman’s general points are worth attention. Every crusade reveals elements of extraordinary planning, organization, and execution, all of which are themselves revealing of the growing sophistication of medieval society and government. Crusades were fantastically expensive and over time generated inventive means of financing them. Crusaders were not holy solitaries. They had to fit into dense networks of political and familial relationships. They were lords or vassals, and maybe both. They had fathers, sons, wives, brothers, sisters, cousins, nephews. Any one crusader’s vow could have an impact on a considerable number of people. Crusaders generally belonged to the political and social elite but crusades needed cooks, dog-handlers, farriers, grooms, stewards, notaries, laundresses, physicians, minstrels, and prostitutes. Crusading armies were motley crews. Most crusaders were paid; they were not romantic idealists. Every crusade was both more and less than a religious war. No one had a monopoly on brutality. No matter one’s vantage point, any one crusade or the movement as a whole provides a privileged view of the medieval world.

Tyerman concludes by bringing the story down to our own times. He does this in two ways. Beginning with Torquato Tasso’s Gerusalemme liberata (1580–81), which turned Godfrey of Boullon’s First Crusade into a chivalric romance, Tyerman discusses writers such as Walter Scott, Edward Gibbon, Chateaubriand, various romantics, Nazis, Fascists, and some recent scholars, Marxists, pious Catholics, and secular historians; painters from Tintoretto to Delacroix; and composers from Monteverdi to Dvořák. His aim is to show how and why the crusades have been kept alive in modern memory. Second, he asks “Do the Crusades Matter?” That is a pretty good question for any historian to ask about his or her subject. He gives several answers, all in the affirmative. If historians in the past were primarily interested in politics, war, diplomacy, and “great men,” then today they are much more interested in memory, memorialization, interfaith and cross-cultural relations, race, popular religion, identity, and gender. The student of the crusades can productively follow any of those threads. Whether one admires or despises the religious faith that impelled countless thousands of people over several centuries to go to war, the fundamental question of human motivation is on vivid display in the crusades. The modern political maps of Iberia and of the eastern Baltic make sense in light of the crusades. From 1495 to 1717 the Holy League—in a set of military campaigns that weren’t quite crusades—fought and defeated the Ottomans. Venetian imperial and commercial opportunism is still on display in Istanbul and has complicated matters in the Adriatic, especially in Istria and Dalmatia, until now. In the end, the Lebanese Maronite Church, united with the papacy in 1181, is the sole surviving remnant of the crusader states in the eastern Mediterranean. Georges Duby’s famous quip that the sole contribution of the crusades to Europe was the apricot must be taken tongue-in-cheek.