Why Do So Many Politicians Refuse to Talk about Gun Control?
By E. J. Dionne Jr.
Domestic Affairs
Donald Trump
Columnists 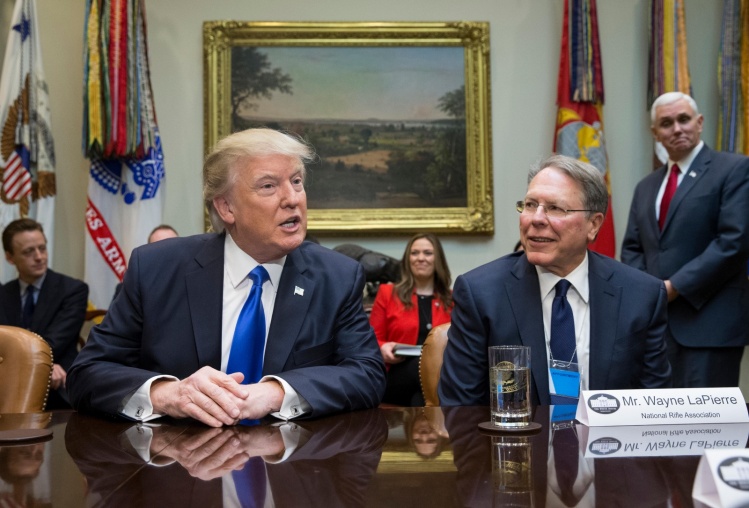 The surest sign a political regime is failing is its inability to do anything about a problem that is universally seen as urgent and has some obvious remedies. And it’s a mark of political corruption when unaccountable cliques block solutions that enjoy broad support and force their selfish interests to prevail over the common good. On gun violence, the United States has become a corrupt failed state.

This is the only conclusion to draw from the endless enraging replays of the same political paralysis, no matter how many children are gunned down at our schools or how many innocent Americans are slaughtered at shopping centers and other public places. Whatever happens, we can’t ban assault weapons, we can’t strengthen background checks, we can’t do anything.

In corrupt failed states, politics is about lying and misdirection. On guns, our debate is a pack of lies and evasions. In no other country is the phrase “thoughts and prayers” a sacrilege, a cover for cowardice. In no other country are the words “mental health” so empty. They are muttered by politicians who have no history of caring in the least about programs to help those with psychological or psychiatric difficulties. But they need to say something to rationalize their allegiance to a gun lobby that appears to be utterly indifferent to mass murder.

President Trump’s rote address to the nation after the killing of seventeen people at Marjory Stoneman Douglas High School in Parkland, Florida, had all the passion of a CEO delivering a middling annual report. He told us: “We are committed to working with state and local leaders to help secure our schools and tackle the difficult issue of mental health.”

Trump’s speech, as Vox’s German Lopez observed, was “one giant lie by omission.” Those seventeen people were killed by an AR-15, not by a knife or a sword or a bomb. But God forbid the president mention guns. Vox also noted that people with mental illness are more likely to be the victims, not the perpetrators, of violence. Yes, and if Trump cared so much about mental health, he wouldn’t be proposing a $250 billion cut to Medicaid, which pays for more than 25 percent of the nation’s mental health care.

Memo to the media: Stop saying in somber, serious tones that we must do more about mental health.
sharetweet

Memo to the media: Stop saying in somber, serious tones that we must do more about mental health. This might well be true, but in the context of crimes such as those at Stoneman Douglas High, to offer such sentiments is to be complicit in propaganda by pretending that a cover story is actually on the level. We should not have to point out over and over that while mental illness exists everywhere, other countries do not have killing sprees comparable to ours.

Our political system is failing, first, because the Republican Party has become a paid agent of the gun manufacturers’ lobby. The party of law and order cares about neither if doing so means causing the least disturbance to the National Rifle Association. This is where corruption comes in. One Republican politician after another who couldn’t even utter the word “gun” following the Parkland horror turned out to have received millions from the NRA. And it’s no wonder that Trump decided he cared so much about mental health. The NRA spent $30 million to defeat Hillary Clinton in 2016.

Aggravating our difficulty in regulating weapons is the vast overrepresentation of rural states in the U.S. Senate, which makes some Democrats wary of taking on the NRA. This is another classic problem of failed regimes: their structures are no longer capable of responding to current needs.

No one wants our political system to fail more than Vladimir Putin does and our powerlessness on guns hardly enhances our democracy’s image to the world. It is worth revisiting reports last spring in Time magazine and the Washington Post about the relationships Russians close to their government are cultivating with the U.S. gun lobby as part of the outreach by pro-Putin forces to the far right. And Peter Stone and Greg Gordon of McClatchy reported in January that the FBI “is investigating whether a top Russian banker with ties to the Kremlin illegally funneled money to the National Rifle Association to help Donald Trump win the presidency.”

Wherever this Russia story goes, we already know that the NRA and its political servants are immobilizing our government on one of the gravest problems confronting us. What would we say about any other country that watched its children gunned down again and again and did absolutely nothing?