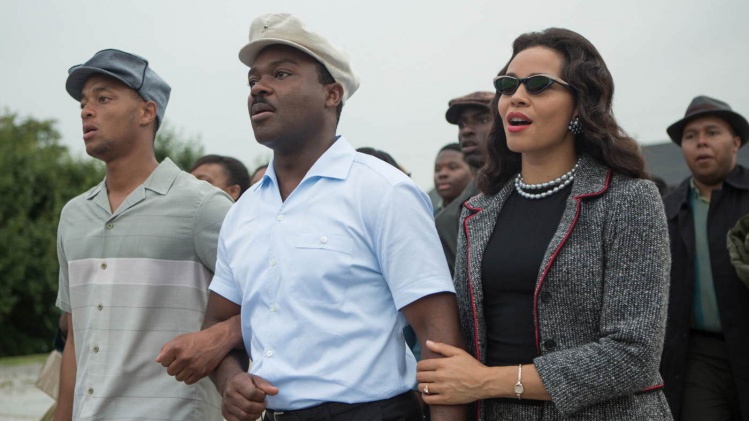 In his play Mary Stuart (1800), Friedrich Schiller invents a scene in which the imprisoned Mary, Queen of Scotland, meets her captor, Elizabeth I, and the encounter ignites a verbal brouhaha ending with the English monarch storming off in high dudgeon and Mary doomed. Surefire theater, but utter fiction. Why did Schiller, a reputable historian as well as a poet, create this historically incorrect scene? Well, one of the play’s themes is that character determines political fate, and so we had to see the headstrong Mary in visible collision with the Machiavellian Virgin Queen. To bring these antagonists face to face wasn’t just good drama but a crystallization of Schiller’s view of history.

In the film Selma, written by Paul Webb and extensively rewritten by its director, Ava DuVernay, President Lyndon Johnson tries to persuade Martin Luther King Jr. not to lead protesters on a march for voting rights from Selma to Montgomery, Alabama, and instead to lend his support to LBJ’s War on Poverty—a program the president hoped would lead eventually to everything King wanted for black citizens. After King refuses to change his plans, it is strongly hinted that Johnson decides to unleash J. Edgar Hoover, who has evidence of King’s adulteries and wants to use it to “dismantle” the minister’s domestic life and, if possible, blackmail him. Several public figures and historians, including LBJ presidential librarian Mark Updegrove and Johnson’s top assistant for domestic affairs Joseph Califano, dispute this portrayal and insist that the president actually urged King to use his marches to bring racial injustices into the media spotlight—thus making it easier for LBJ to push through more civil-rights legislation.

The events of Selma took place only fifty years ago, and so the film’s alleged misrepresentations are bound to raise more hackles than Schiller’s distortion of an episode that took place more than two centuries before he wrote his play (we are used to centuries, if not decades, turning facts into usable myth). Still, a movie critic must ask: If DuVernay deliberately falsified history, what was her dramatic purpose in doing so? As a citizen I want the historical truth to emerge, and nothing excuses the possible errors of Selma when it’s considered purely as a historical account. But in drama and poetry, valid psychological and even historical insights can be achieved at the expense of factuality. Mary Stuart’s insights into how political power can be undermined by personality traits make it a poetic meditation on history, even if it plays fast and loose with the facts. So what is Selma’s meditation?

A recently published book about the congressional debates over civil rights is titled The Fierce Urgency of Now. That might have been the subtitle of Selma, for that is precisely the theme of the movie, which dramatizes one moment in the civil-rights movement when King, wracked by doubts and intimations of mortality, could have put his goals on hold. In a jail-cell colloquy with his right-hand man Ralph Abernathy (played to juicy perfection by Colman Domingo), MLK seems close to embracing LBJ’s championship of jobs and education instead of immediate integration and voting rights. What good, he asks, is a place at the lunch counter if you can’t afford a hamburger, and why vote when you can’t read? Abernathy allays these doubts, but we can certainly understand how King could have them.

It is DuVernay’s concern to make us feel viscerally the fierce urgencies that—even more than Abernathy’s words—push King’s doubts aside. The injustices of the time are memorably portrayed. When Oprah Winfrey, in a vivid and unstarry turn as Annie Lee Cooper, tries to register to vote and the registrar contemptuously puts her through a ridiculous test that he would never impose on a white citizen, the director keeps her camera close enough to Winfrey’s face to register the suppression of rage that tugs at muscles and nerves, a rage not only at this particular humiliation but at a lifetime of having to cope with such indignities. When we see some little girls in Birmingham killed in a bomb attack as they skip down their church’s steps, we can’t help feeling that the comfortable safety most whites take for granted was denied—and may still be denied—to an entire race of Americans, including children. And when the eighty-four-year-old grandfather (movingly played by Henry G. Sanders) of Jimmie Lee Jackson, who was shot to death by state troopers, tells King how his grandson had promised him that he would finally get to vote after fifty years of waiting, we feel in an utterly concrete, nonsymbolic way the burden pressing its fierce urgency on King’s consciousness.

All this doesn’t validate an injustice done to LBJ, if that indeed is what Selma commits. But what sort of injustice is this exactly? In the dramatic scheme of Selma, this LBJ does not stand for anything evil, as Governor George Wallace and Sheriff Jim Clark certainly do. And the almost entirely black audience with whom I saw the movie lustily cheered the president’s climactic speech to Congress that ends with the famous “and we shall overcome.” Selma’s LBJ represents all the liberal Democratic presidents of the mid-twentieth century—FDR, Truman, Kennedy—who meant well by African Americans, sometimes did important things for them (e.g., Truman’s integration of the armed forces), but were either unwilling or unable to secure for them all the rights of full citizenship. In other words, the movie’s LBJ is not a villain but a benevolent, if retarding, force. He needs to be swept along, not swept away. I do wish, though, that the great actor who plays LBJ, Tom Wilkinson, had been encouraged to capture more of his rambunctious, über-redneck force. Instead, Wilkinson’s more-than-competent performance presents LBJ as a troubled, slightly bullying CEO.

One element struck me as not quite at one with the rest of the movie: the domestic troubles of the Kings. Here, Ava DuVernay sticks her toe into murky waters but never really takes the plunge. Though she’s to be commended for not overlooking the issue of King’s adulteries, the sheer oddness of MLK’s prolonged pause when his wife, played by the beautiful Carmen Ejogo, asks him the simple but profound question “Do you love me?” suggests a disturbing feature of King’s life that DuVernay didn’t really want to explore. (The middle-aged women sitting next to me at the theater loudly exclaimed, “Why did he hesitate?”) So I ended up wishing she hadn’t broached the issue at all. I also wish she hadn’t directed Ejogo to appear so unrelievedly pensive. In the epilogue, when Mrs. King takes part in the last of the three marches on Montgomery, Ejogo looks so at ease that I wished DuVernay had given us some earlier glimpses of this other Coretta, a woman whose brow wasn’t always furrowed. That would have helped us understand what attracted the Kings to each other in the first place, and made their subsequent marital troubles all the more poignant.

Finally, the central performance: David Oyelowo’s King. It is a rare achievement. He captures both the private and public man, the magnetic orator (Oyelowo’s voice doesn’t sing out with as rich a melody as King’s voice possessed, but the actor makes up for it with force and rhythmic control), the conciliating organizer of often-fractious followers, the relaxed crony of old collaborators, the nonplussed husband, and, most important to the tenor of this movie, a man who foresees his own death. This isn’t the unbendable, righteously beaming leader we’ve seen in made-for-TV movies about King, but a death-haunted man, convinced that his time is running out and that he hasn’t made the most of the task life has thrust upon him. For the King we see in Selma, the choice isn’t now or later, but now or never.