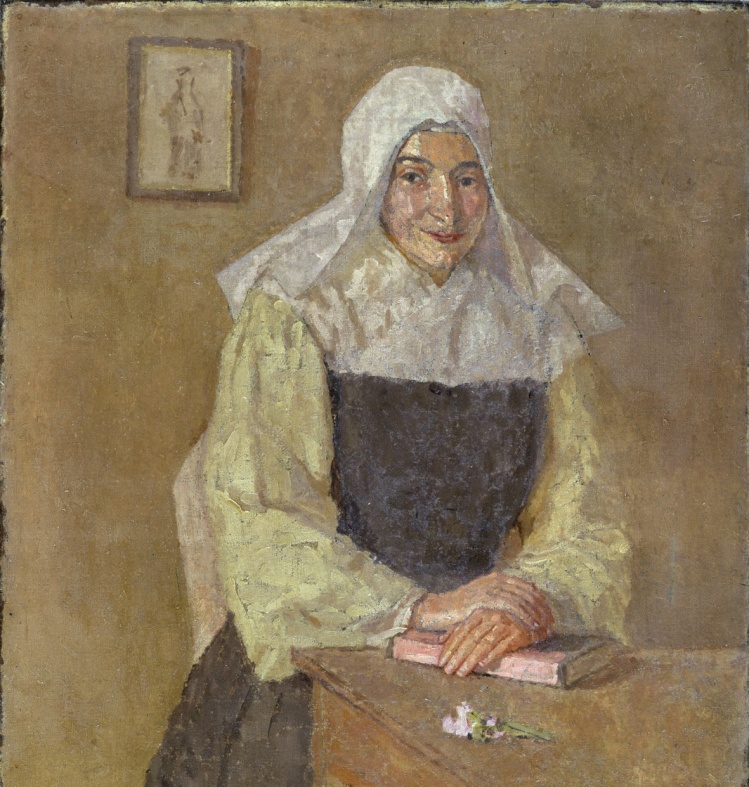 Celia Paul is one of England’s leading painters, best known for her intimate portraits of herself and her family members. Paul has felt a lifelong kinship with the Welsh artist Gwen John (1876–1939), with whom she shares biographical parallels as well as a fierce sense of artistic independence. The following selection is excerpted from Paul’s new book, Letters to Gwen John, a series of imagined letters to John, punctuated by Paul’s reflections on her own work and life, including her husband’s diagnosis of cancer and the emergence of the COVID-19 pandemic. It is reprinted with permission from New York Review Books.

Gwen was commissioned by the nuns in the convent near where she was living in Meudon to paint a portrait of their foundress, known as Mère Poussepin. They gave her a small prayer card with an engraving of Mère Poussepin’s image on it. The foundress is represented as an old woman with a long nose and a kind smile. Inspired by the image of the old woman with the long nose, Gwen begins a series of ‘nun’ paintings, the first one of which most closely resembles the face on the prayer card. But in Gwen’s painting, she uses a young woman as a model for the Mother Superior: the only concession to a likeness is that she elongates her young woman’s nose and gives her a benevolent smile.
Old age is never Gwen John’s subject matter. I wonder if it is because her mother died young, when she was still a child, and she remembered her as a youthful woman? She never paints an aging self-portrait. In her later years she makes several studies of a subject that she titles simply Old Woman. But she is interested in the way the slab of the old woman’s white headscarf contrasts with the narrow black line of material that trims the collar of her dress. She is not interested in recording the wrinkling of her skin, or even how the old woman must feel as she approaches her final years: there is no psychological empathy.

When Gwen was at the Slade [School of Fine Art at University College, London] she painted a portrait of the cleaning lady in the house she shared with her brother in Fitzroy Street. She dresses Mrs. Atkinson in a black cloak and a black hat that resembles a collapsed chimney pot. She gives the old woman’s eyes a far-away expression: this and a sheep’s skull on the shelf above the fireplace (a childish trophy brought back from a walk in the Pembrokeshire countryside during the holidays) are the only indications that Gwen is attempting to understand the pathos of old age. What really interests her are the tawny and rust-red patterns of the wallpaper behind her head and the black fireplace, which resembles the fireplace that Lucian [Freud] would later use as a backdrop to an early nude that he painted of Gwen’s niece, Zoe Hicks—[British painter] Augustus [John]’s daughter by a South American model named Chiquita.

Rodin made a sculpture that he titled Celle qui fut la belle heaulmière, which translates as ‘She who was the beautiful helmet-maker’ (or, more likely, ‘helmet-maker’s wife’). Her skinny arm is thrust behind her back and her tired dugs drip down like tallow grease onto her withered thighs as she sits, doubled-up with rheumatism; her head, on its scrawny neck, is lowered and her eyes in their hollow sockets are staring at the ground.

I once asked Lucian why he never painted naked portraits of old women. He replied that it wasn’t his subject matter, but maybe it was mine. I have thought about this advice.
There is a painting by the artist Alice Neel of herself, naked in old age. There is no sentimentality in this depiction of herself, no strained emotions. She sees herself as she is. All her work has this quality of acceptance. It is what makes her art uniquely uplifting. There is no overblown romanticism. She sees people—herself included—as they are.

I would like to do the same. I would like to see things as they are without the rose-tint of yearning through which I look at my outer and inner worlds. How did Alice Neel acquire this clarity of vision? If I too possessed this matter-of-fact clear-sightedness, would I lose some vital part of myself? Would my work become ordinary? I would like to try, nevertheless. Self-knowledge leads to self-acceptance. Rembrandt depicts himself in old age as he is—the squashy nose and sagging jowls—but it is clear that he accepts himself, that he loves himself. He doesn’t flinch from the truth, yet he doesn’t falsify his appearance with exaggerated cruelty or self-pity. An artist should love herself, if she is to be true. Once, when I was battling with self-hatred while trying to do a self-portrait, I had the idea of copying one of my favorite portraits by Frans Hals: Portrait of a Woman, in the Ferens Art Gallery in Hull. The woman’s face expresses a transcendent goodness and kindness. I placed my copy of the Hals portrait on an easel adjacent to the easel that supported my miserable attempt at self-depiction, so that Hals’s woman would look kindly upon me. My painting grew more compassionate as a result, and my self-portrait less falsely severe.

‘Flesh,’ aging or young, is almost impossible to depict impartially. Lucian’s and Rodin’s main subject is ‘flesh.’ Despite the power of their realism, the emotion is sometimes overblown and theatrical. Rodin’s Catholicism infuses his nudes with an upward strain: they are anguished or post-coitally inspired. Lucian was born in Berlin during the Weimar Republic. His art bears traces of the influence of Otto Dix and George Grosz. Even though this movement, named Neue Sachlichkeit (“New Objectivity”), aims to shun the romanticism of the previous era, Dix and Grosz’s abstinence is tainted by a romantic warp.

Despite her shabby surroundings, she had a quiet dignity.
sharetweet

Old age has always been my subject matter. When I was at the Slade, before I started making portraits of my mother, I painted an old woman who was a resident at the old people’s home near where we lived in Hull, where my father had been appointed bishop after leaving Lee Abbey. She was called Mrs. Brown.

Mrs. Brown was a small bird-like woman with huge, dark eyes that seemed to take up most of the space in her diminutive face. They often filled with tears as she was sitting for me. She sat very still. One day the tears spilled out and flowed down her cheeks. She told me that she was thinking of her cherished grandson, who had killed himself quite recently. She had doted on this boy, and all her fondest memories were of the time she spent with him when he was a child. But he had grown up to be an awkward and troubled adolescent. Mrs. Brown and I became friends and she came to tea at the bishop’s house.

Mrs. Mawson was on the waiting list for the old people’s home. I visited her in her one-bedroom house, which smelled of damp and urine. I set up my easel in her cramped sitting room. Despite her shabby surroundings, she had a quiet dignity. There was something innocent and childlike about her. We hardly spoke. Her husband had died a few years previously and she was unused to talking. She sat in her armchair and gazed past me with an expression of gentle resignation.

I often think of those old women whom I have painted, my mother included, and I wonder at their quiet patience, and what inner reserves of strength they must draw on to keep up their courage and power to endure, riven as they all must be by memories and fear of the approaching dark.

Celia Paul is one of England’s leading painters, best known for her intimate portraits of herself and her family members. 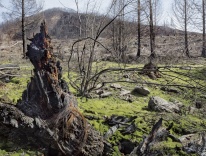