By Jerry Ryan
Death and Dying
Spirituality
The Last Word 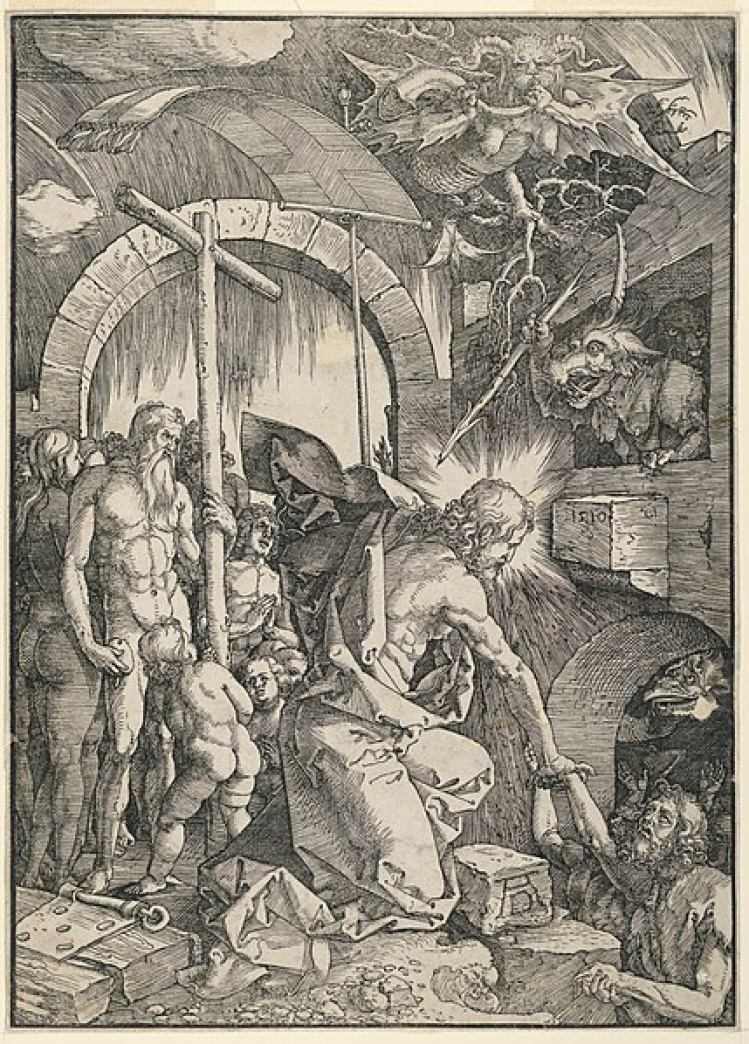 Albrecht Dürer, Christ in Limbo (The Harrowing of Hell), 1510

I might imagine the dead waking, dazed into a shadowless light in which they know themselves altogether for the first time. It is a light that is merciless until they accept its mercy; by it, they are at once condemned and redeemed. It is Hell until it is Heaven. Seeing themselves in that light, if they are willing, they see how far they have failed the only justice of loving one another; it punishes them with their own judgment. And yet, in suffering the light’s awful clarity, in seeing themselves within it, they see its forgiveness and its beauty and are consoled.

I turned eighty-two not long ago. According to popular mythology, with age comes wisdom. That might be true for some, but for me the years have brought forgetfulness and confusion. My silence is not the profound silence of an elder who has arrived, after a long life, at a sort of synthesis; it stems more from a fear of saying something really stupid about things I’ve forgotten or only vaguely remember.

Another aspect of aging is the realization that things are going to change radically for me pretty soon. I’m both curious about dying and afraid of all the uncertainty that surrounds it. That is why the above passage from one of Wendell Berry’s novels, quoted last year in this magazine (“Reign of Love” by Eric Miller, January 4, 2019) hit home so hard. It seemed to me a very beautiful and coherent description of Purgatory—something we don’t often talk about anymore.

One of the major difficulties we have in trying to imagine the afterlife is that it is outside of time as we know it—for time is linked to material change. We say that there is “no time” in God who is an Eternal Instant. The theologians tell us that the “spiritual time” of the disembodied soul is something beyond what we can imagine, since we can imagine time only as a succession of “states,” with a before and after.

There are those who imagine we will all experience an instantaneous bodily resurrection at the moment of our deaths because, whatever the historical moment at which we die, there is no delay in our experience of this “spiritual time” between the moment of death and the Parousia. The judgment of each person would thus be integrated within the fulfillment of all things. All that was hidden would be revealed all at once, rather than one person at a time. The mystical links that bind us together with earlier and later generations would be part of this general revelation, all of us, our ancestors and our posterity, meeting in an eternal present in which we would discover both a crucifying truth and an ineffable mercy. This all-encompassing revelation would constitute the essential joy of the blessed.

It is precisely when we enter into the abyss that we will find Jesus.
sharetweet

But that would seem to leave something out. In the Apostle’s Creed we proclaim that, after his death, Christ descended into Hell. For Urs von Balthasar, the disembodied soul of Christ continues to be united to the Word of God but no longer experiences this union during the “three days in the tomb.” Hell is the place where there is neither faith nor hope nor love. This is sin in its essence, a “second death” in which we experience the absence of God and thus a meaninglessness without light. Here, too, all sense of time is lost, so that the Resurrection comes as an abrupt surprise.

If we are to follow Christ, we, in our turn, must go where he went. We must experience those dark corners and hidden horrors in our soul that we did not dare to explore and that God’s mercy has until then kept in obscurity. Then we shall realize that when we acquiesced to evil in our choices, we ratified evil in itself. But it is also precisely when we enter into this abyss that we will find Jesus “trampling down death by death and upon those in the tombs bestowing life.” For the “three days in the tomb” represent the victory of life over death by the entry of Life into death. Life destroys death from within. When we, following Jesus, enter into death, we will find him there. This is what Wendell Berry seems to mean when he says that we must descend into hell until it becomes heaven. We must accept the merciless light until it becomes mercy, be punished by our own enlightened judgment in order to receive a mercy beyond imagination. When St. Thomas, in his Summa Theologica, asks if it was fitting that Christ die on the cross, his first answer was that Jesus did so in order that we might not be afraid to die, to die even a horrendous death. All this, in the end, is a mystery where we can only babble, guess, hope—and, yes, fear a little too.