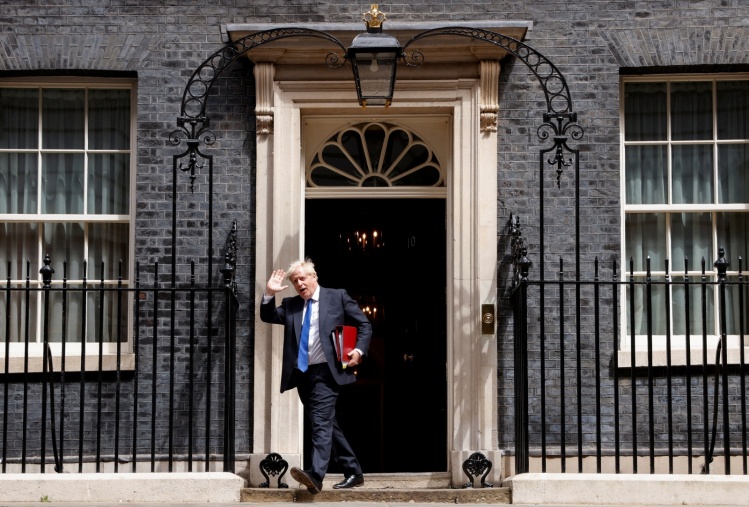 In the end, the pressure was too great even for “Teflon Boris.” On July 7, Boris Johnson officially stepped down as leader of the Conservative Party after more than fifty Tory officials resigned in protest over his mishandling of allegations concerning Deputy Chief Whip Chris Pincher. Announcing his decision, Johnson neither apologized nor agreed to step down immediately as prime minister: he would remain in office until the party elected a new leader. He never even used the word “resign.” Nevertheless, the tenure that Johnson hoped would last ten years or more is at an end, and in just over a month, Britain will have a new prime minister.

Now, for the second time in three years, the United Kingdom is closely watching an election in which the vast majority of the population is unable to take part, with voting limited to Conservative MPs and, for the final round, Conservative Party members. Over the past weeks, successive rounds of voting have eliminated six candidates, leaving former Chancellor Rishi Sunak and Foreign Secretary Liz Truss as the final contestants. The battle, perhaps predictably, has not been pretty. Recent debates have been characterized by ad hominem attacks, absurd aspersions (Sunak described his opponent’s economic policies as “Marxist”), and an overall dearth of policy innovation. As of this writing, Truss is firmly in the lead, commanding the favor of 62 percent of Conservative Party members. It remains to be seen whether Sunak’s belated embrace of tax cuts and slightly desperate attempts to lean into culture-war rhetoric will restore his ebbing momentum.

Whoever wins will be rewarded with a historically challenging brief. The next prime minister—who will take office in September—will have to contend with a spiraling cost-of-living crisis (household energy bills are predicted to rise by as much as 74 percent by October), and the winter pressure on a health service already stretched to its limits. With such challenges ahead, Truss and Sunak may well be battling for the chance to undergo political obliteration two years from now. Though the next general election is not formally due until 2024, the Conservatives’ electoral situation is already looking fragile. In June, two by-elections resulted in the Conservatives losing the constituencies of Wakefield and Tiverton and Honiton—the latter elected a Liberal Democrat after voting Conservative for over a hundred years. Meanwhile, Conservative MPs in so-called “red wall seats,” traditionally Labour areas that the Conservatives seized in the 2019 election, have warned that their seats may now be imperiled, with many of their constituents complaining that there is still no sign of the promised “levelling up.” In such challenging economic circumstances, it is hardly surprising that concerns over the next general election have frequently surfaced in the current leadership debates, where both candidates have sought to prove, not very convincingly, that they represent the best chance of heading off a Labour victory.

It is, of course, difficult to predict what topics might dominate an election still two years off. Fuel prices, the NHS, growing inequality, and outrage over cruel and divisive immigration policies may all play a part. Alongside these concerns, the future Conservative leader would do well to reckon with one further issue: the smoldering legacy of the Partygate scandal. That Partygate could still play an important role in the next election might seem, on the face of it, rather unlikely. The series of scandals over lockdown parties in Downing Street, in which both Johnson and Sunak were implicated, certainly gripped the public conscience earlier in 2022. In June, after the publication of the long-anticipated Sue Gray report, widespread public anger led to a vote of no confidence in the House of Commons. Once again “Teflon Boris” survived, with the backing of 211 MPs against 148 votes of no confidence.

Johnson’s successor would be foolish not to reckon with the implications of Partygate.
sharetweet

Still, Johnson’s successor would be foolish not to reckon with the implications of Partygate. While the press has mostly moved on, internal parliamentary investigations are still underway. A report from the House of Commons Privileges Committee, released in July, indicates that Johnson may have to face a by-election in his Uxbridge seat if he is found to have misled MPs when he repeatedly claimed that “all guidance was followed” during the lockdowns. Such an election probably wouldn’t take place while Johnson is still prime minister, but it would still be a significant source of embarrassment for the Conservatives, setting yet another disciplinary precedent for Johnson, already the first prime minister in British history proven to have broken the law while in office.

There is also the possibility that more revelations may still emerge. Dominic Cummings, the Machiavellian chief advisor Johnson dramatically sacked in late 2020, has hinted at the existence of more photos of the gatherings we already know about. And rumors continue to circulate about other gatherings, including an “Abba Party” thrown by the prime minister’s wife, Carrie Johnson. Such revelations could be especially dangerous for Sunak, who was fined for attending a birthday party for Johnson during the first lockdown. Sunak has tried to present himself as a safe, reliable pair of hands, and to distance himself from Johnson’s volatile reputation. More reminders of the scandal or evidence of further rule breaking by Sunak himself could be disastrous for his standing with both Conservative MPs and the public more broadly.

But even without further revelations, the next prime minister will still have to reckon with the long-term impact of the scandal. To fully understand the significance of Partygate, one must remember how restrictive the Covid rules were here in England. The country’s first lockdown began on March 23, 2020, and was not lifted for three months. The rules, especially in the early days, were severe. Meeting anyone outside of your household group was forbidden and you were permitted to leave home only for essential purposes, such as infrequent shopping and exercise. Many, including myself, did not see anyone outside their home for months. These measures, strict as they were, received broad support from the British public, with 93 percent of Britons backing the first lockdown in March. Compliance with the rules was high.

On May 13, nearly two months after the lockdown was introduced, the rules were slightly relaxed to allow people from different households to meet, albeit outside and distanced from each other. Two days later, Health Secretary Matt Hancock gave a press conference stressing the importance of adhering to these rules, and insisting that the good weather should not be taken as an excuse for illegal socializing. Just two hours after this press conference, a party of between thirty and forty people was underway in the Downing Street garden, which the prime minister attended for around half an hour. The Sue Gray report provides a grisly dissection of the event, its dry, bureaucratic prose contrasting sharply with the evidence it presents. It provides conclusive proof that a range of government officials knew of the event. In a WhatsApp message sent after the event, Chief of Staff Martin Reynolds expressed relief that the press “hadn’t focused on our drinks,” and fatefully concluded that “we seem to have got away with” it.

It is hard to say what was more egregious, the hypocrisy or the recklessness. What were they thinking? Already in lockdown for close to two months, the United Kingdom registered 2,530 new Covid cases on May 15. This was many months before vaccines became available, and little was known about the safety of outdoor events. It is striking, then, to consider how cavalier the guests at this party were about their own safety, let alone that of the other attendees. It may well be the case that these parties, like so many other scandals during the Johnson government, will be forgotten by the time of the next general election. But Partygate is unlike many other scandals. The Covid lockdowns marked an extraordinary act of sacrifice and collective resolve from the British public. By exempting themselves from this sacrifice, those in government left most Britons feeling betrayed.

Johnson’s imminent departure will not lift the stain of Partygate. Unless the next Conservative leader can find a way to rebuild public trust after this singular dereliction of duty, they may well find that it is this betrayal, as much as any policy decision, that costs the Tories the next election.