A Saint Born of Blood

What We Can Learn From Catherine of Siena
By B. D. McClay
Spirituality
Books
Theology
Women in the Church 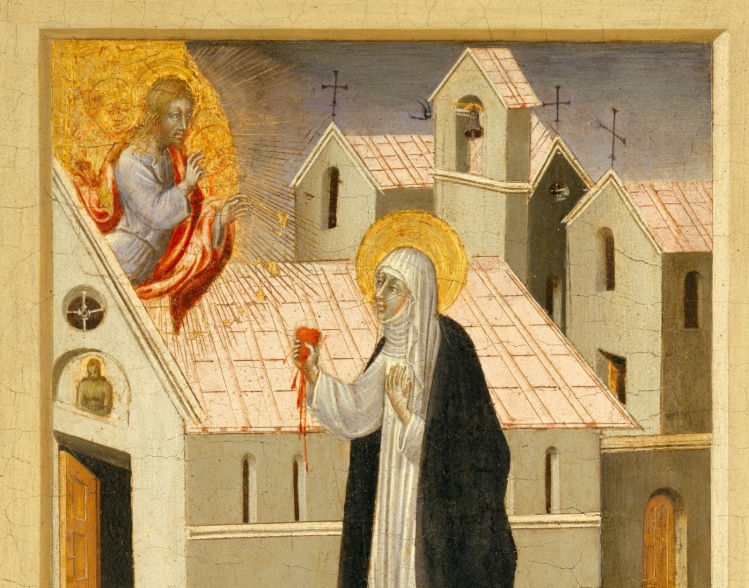 When I became Catholic and picked a confirmation saint, I had two criteria. First, I didn’t want a woman—because I felt I was expected to pick one and because most women saints, who seemed to have begun their life of piety from the cradle, intimidated me. And second, I didn’t want a Dominican, because my spiritual life was already rife with Dominicans and I didn’t think I needed another. So naturally I ended up with Catherine of Siena, a Dominican tertiary who vowed virginity at the age of seven and used to lead her playmates in flagellation exercises.

As intimidating as they are, I still love these women with their enthusiastic dedication to mortification of the body. Angela of Foligno drank the water she washed lepers in and stripped herself naked before a crucifix to vow chastity. Veronica Giuliani licked walls clean. Mary Magdalene de’ Pazzi walked barefoot in the winter, whipped herself with a crown of thorns, and encouraged her fellow nuns to step on her. Beatrice of Ornacieux drove a nail through her palm. And Catherine of Siena—in addition to her other bodily mortifications, which were many—famously ate almost nothing.

I do not resemble these women. The priest I met with in lieu of RCIA wrote a book about how to build a healthy spiritual life. The first step: waking up with your alarm clock. I’m still stuck there. (Catherine slept on wooden planks.) The howls I let out when I stub a toe make me think that I’m not quite ready to hammer a nail into my palm. I anticipated my reception into the church by getting a nice haircut and a new dress, not cutting off all my hair (Clare of Assisi, Catherine) or scalding myself (Catherine again). But I admire and even envy them the way I love and envy snake handlers.

These wares are not for all markets, however, as André Vauchez makes clear in the introduction to his newly translated book, Catherine of Siena: A Life of Passion and Purpose. He quotes two of her previous biographers, one of whom perceives in her “a kind of overpowering spirit, an element of tyranny that put me off” and the other who believes that the saint was “not particularly pleasant.” (They prefer Francis of Assisi and Teresa of Avila, respectively.)

Vauchez notes that he, too, is not very fond of Catherine, who he finds self-promoting and naïve. But if we don’t let ourselves “get sidetracked by her personality,” we’ll find—well, it’s not clear. Vauchez is quick to note that Catherine is, as a theologian, not original. (Is originality the best grounds on which to judge medieval spiritual writing, I ask myself?) In any case, once he’s dispatched with her work on those grounds there’s really very little left of her except her personality.

Catherine created an informal family for herself, made up of men and women, religious and laypeople, who often traveled with her.
sharetweet

All the same, one can learn a lot from Vauchez’s book, because even if he’s dubious about Catherine’s persona, he’s clarifying when it comes to Catherine’s context. This in turn underscores the aspects of her character that made her so strange to her contemporaries, and the ways in which those she won over in her lifetime had to spin some of her more eccentric behaviors to critics after her death.

Catherine, for instance, was indeed a Dominican tertiary and did wear a habit. But she wasn’t a member of an order and remained a layperson all her life, not least because formal membership would have required her to be cloistered. Instead, Catherine created an informal family for herself, made up of men and women, religious and laypeople, who often traveled with her. She lived with her parents when she was in Siena, and with her admirers when she was elsewhere.

Though this might not seem odd to us, it was scandalous at the time, and Vauchez draws attention to the ways in which Raymond of Capua, Catherine’s confessor and first biographer, softens the aspects of her behavior that would have stood in the way of her sainthood. Thus, while on the one hand Catherine confessed to Raymond that she seriously considered cross-dressing in order to join a men’s order, on the other hand she offered this protest to God:

How can I, wretched and frail as I am, be of use to souls? My sex, as you know, is against it in many ways, both because it is not highly considered by men, and also because it is not good, for decency’s sake, for a woman to mix with men.

To this God replies: “In my eyes there is neither male nor female, rich nor poor, but all are equal.” (That settles that.) Catherine’s unique position, as Vauchez writes, meant that she “lived especially in the heart of the world and in the midst of its contradictions” in a way that few of her contemporaries were able to achieve.

Similarly, Vauchez’s portrayal of Catherine’s involvement in getting the pope to return to Rome from Avignon doesn’t attribute to her power that she did not really possess, but also doesn’t write her out of the story entirely. This is a welcome, even-handed way of understanding the role Catherine played in political affairs.

It’s when Vauchez moves from Catherine’s context to Catherine’s work and her troublesome personality that the book starts to lose me. Her visions and images are always coming up short for him—not original enough (as noted above), or impressive enough, or in good enough taste. At the same time, he does remark on the same things in her work that I myself find truly wonderful: her emphasis on love, particularly love physically manifested as Christ’s blood, and her conviction that “mystical life and involvement in the affairs of this world are really two faces of one and the same love.” The latter is expressed in her involvement in politics, the former perhaps most beautifully to me by a passage from The Dialogue in which God tells her that those who have turned away from him have

encrusted their heart in a diamond rock that can never be shattered except by blood. Still, I tell you, in spite of their hardness, let them while they still have time and freedom to choose to seek the blood of my son and with that same hand let them pour it over the hardness of their heart: It will shatter the diamond and they will know the fruit of that blood which was paid out for them.

But about that irksome personality…I agree with her various critics that Catherine was, indeed, a difficult person. Her will, as friends and critics alike say, was inflexible and overpowering. She seemed to know no fear or self-doubt; if she could stick her oar in, she would. She did what suited her because what suited her suited God. Anyone who stood in her way seems have been run over, and most of her contemporary critics—including, according to Vauchez, Raymond himself—were converted into friends.

But in truth, it’s her difficulty that made me fall in love with her. Catherine reminds me of the woman who reaches out to touch Christ’s cloak in the crowd, of the Canaanite woman who insisted on her right to eat the crumbs that fall from the table. She gripped whatever was in front of her and didn’t let go; she was, indeed, incapable of letting go. When Catherine’s mother died before receiving the sacraments, she went to God and demanded her mother back—successfully, apparently. Catherine was the saint I needed: not so serene and so distant that her existence felt more like reproach than encouragement, but obstinate, strange, at times almost monomaniacal, unaccommodating, high-handed, and loving. Not a plaster saint, but—as she’d put it herself—a saint born of blood.

Living in the Middle