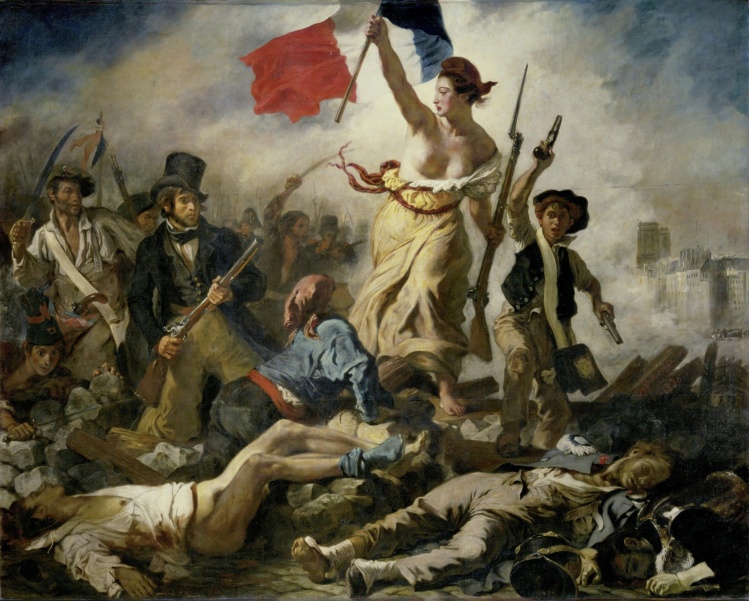 “I saw, with pain, that you are persuaded that any intelligent person who thinks differently from you...is not a good citizen.” One would be forgiven for thinking that the line comes from a conversation overheard last week in Washington D.C. It doesn’t. It is what Madame Roland (Marie-Jeanne Roland de la Platière), one of the important figures of the French Revolution, told Maximilien Robespierre more than two centuries ago. Not that the reproach helped the architect of the Reign of Terror change his mind; if anything, such criticisms made him even more impatient. For he was convinced that the Revolution needed terror as fire needs fuel. “Terror is nothing other than justice, prompt, severe, inflexible,” and for him the Revolution was above all a matter of historical justice. It didn’t help Madame Roland either: she would end up imprisoned and, eventually, guillotined. She had been a genuine, enthusiastic child of the Revolution, but as Pierre Vergniaud famously put it, the “Revolution, like Saturn, devours its own children.” (Vergniaud himself would be devoured in October 1793.)

Parallels are plentiful between Robespierre’s time and ours. When he pushed his fellow Jacobins to “fall on all the odious journalists” whose “existence becomes more pernicious to society every day,” one cannot but be reminded of the way journalists are sometimes treated today as “enemies of the people,” disturbers of the social peace whom we could do well without. Under the excuse of a “need for unity,” disagreement and dissent can easily be presented as treason. Even before the Reign of Terror started, as Jeremy Popkin observes in his excellent A New World Begins, revolutionary groups in France “increasingly saw their opponents not just as misguided but as traitors to the country who needed to be physically eliminated.” And once you have got rid of someone in your mind, doing so in practice can be a very simple affair.

As Popkin shows, the “French Revolution was the laboratory in which all the possibilities of modern politics, both positive and negative, were tested for the first time.” It’s not just the philosophy of human rights, freedom, and equality that we share with those who made the French Revolution; we also owe to them much of the way we think about politics and society, social transformation and political change. To an important extent, we still employ the categories formulated by the French revolutionaries; we use their language to understand our political realities, and even ourselves. And it’s from them that we have largely learned how to dream politically: the phantasm of a radically new beginning that would cut us off from a shameful past, the intoxicating vision of a world made anew—this was all formulated and rehearsed in France more than two centuries ago. That’s why a closer look at the French Revolution might teach us something important about our own political imaginary. And also about how dangerous such revolutionary dreaming can become when it gives itself permission for terror.

The French Revolution was, at its core, a project about radical novelty. The whole system of social and political institutions the French had been using for centuries was now suddenly found to be both oppressive and irrational. Together, these two sets of institutions constituted l’ancien régime (“the old regime”), something now to be ashamed of and replaced by new, rationally designed, forward-looking institutions. Newness became the Revolution’s first demand: everything had to be re-made from scratch—ironically, sometimes even the things brought forth by the new regime. Georges Danton, before his turn came to be devoured, put it best: “We have to look again at everything, recreate everything.” The Declaration of the Rights of Man, he said, “is not without faults, and it deserves to be reviewed by a truly free people.” Only a permanent revolution was sufficiently revolutionary.

We still employ the categories formulated by the French revolutionaries; we use their language to understand our political realities, and even ourselves.
sharetweet

The theoretical need for a clean break from the past could be glimpsed in the writings of Enlightenment authors, yet experiencing such a break was another matter. As one follows Popkin’s account of the major events of the Revolution, one senses not only the tremendous social excitement generated by what the revolutionaries were attempting, but also the widespread anxiety and trepidation. There’s at least a hint of apprehension in the words of Philippe Le Bas, a radical member of the National Convention (the first government of revolutionary France), right after the execution of Louis XVI. Le Bas had voted for the king’s decapitation, and now he was gradually coming to terms with the new world: “We have done it. The road back is cut off, we have to go forward, whether we want to or not, and now one can really say, ‘live free or die.’” There was no longer anything for the revolutionaries to fall back on if their bold experiments failed. All the old practices and institutions had been abandoned and everything had to be reinvented—from the calendar to the measurement system to public education. Nothing was off limits for these dreamers. The members of the Society of the Friends of Truth, one of the political clubs that mushroomed in revolutionary Paris, dreamed of “remaking the universe” itself, and of “creating a new religion of humanity.”

Some worried it was precisely the revolutionaries’ relentless novelty that made their project not just impractical, but dangerous. And, as Popkin shows, few of the Revolution’s critics were more penetrating than Edmund Burke. When his Reflections on the Revolution in France came out in November 1790, its subject matter was still in progress, yet Burke managed to capture some of the central issues at stake in the Revolution. He thought that the revolutionaries’ fundamental mistake came precisely from their rejection of the past: “You began ill, because you began by despising everything that belonged to you.” Reason alone, he argued, is feeble and imperfect and easily overwhelmed by the complexity of the tasks at hand. We should not rely too much on it when it comes to the more serious matters of life: “We are afraid to put men to live and trade each on his own private stock of reason, because we suspect that the stock in each man is small.... The nature of man is intricate; the objects of society are of the greatest possible complexity.” The spectacular failures that followed in quick succession—the Reign of Terror, the rise and rule of Napoleon Bonaparte, the Restoration (a nasty hangover after a glorious party)—seemed to ratify Burke’s criticisms.

In this respect, the French Revolution anticipated more recent attempts at a complete separation from the past, from the Bolshevik Revolution in Russia to Mao’s Cultural Revolution in China. In all three cases, a high price was paid for a rather banal lesson: there is more to humanity than reason. We are a complex mixture of rationality and emotion, logic and imagination, common sense and prejudice. Things such as local cultures and attachments, peculiar customs, old traditions and odd emotions, irrational though they are, have at least as important a role in any real society as the abstract schemes dreamed up by philosophers. The baggage of custom may be just ballast, but sailing without it is reckless. In Arthur Koestler’s Darkness at Noon, the old Bolshevik Rubashov, while waiting in his prison cell to be devoured by his own revolution, comes to observe: “We have thrown all ballast overboard; only one anchor holds us: faith in one’s self.”

Coming from a radical rationalist, that’s quite an admission. For faith has its reasons that mere reason will never understand. When Robespierre, realizing that the French could not do without some form of religious life, came up with a cult of the Supreme Being, he too conceded more than he would have liked to. Some years later, when Napoleon mended ties with the Church, he showed that he understood the human heart much better than the revolutionaries did. Not that he believed in God, but he knew that the people wouldn’t believe in him unless he showed some faith in God. This was cynical, but not delusional.

To be human is a messy, complicated affair, and ambiguity is often all we get.
sharetweet

Popkin is to be praised for having produced a remarkably nuanced, unprejudiced, and detail-rich account of the French Revolution. He has studied revolutionary France for most of his adult life, yet his passion for his subject hasn’t blinded him. His take on Robespierre, to give just one example, is critical but also measured and fair. “Although he had a personal authority that none of the other committee members could match,” writes Popkin, “Robespierre was never a revolutionary dictator in the mold of V. I. Lenin or Mao Tse-tung.” Not that this would be of any consolation to all those caught up in Robespierre’s Terror.

The major lesson Popkin learned after many years of studying the French Revolution is disarmingly simple and anticlimactic: when all is said and done, its message as well as its outcome “remain ambiguous.” To be human is a messy, complicated affair, and ambiguity is often all we get. So much for a world made anew.

Costica Bradatan is a professor of humanities at Texas Tech University and an honorary research professor of philosophy at University of Queensland in Australia. He is the author, most recently, of Dying for Ideas: The Dangerous Lives of the Philosophers (Bloomsbury).