Who Were the ‘Thieves’ Crucified with Jesus?
By Rubén Martínez
Spirituality
Social Justice
Immigration 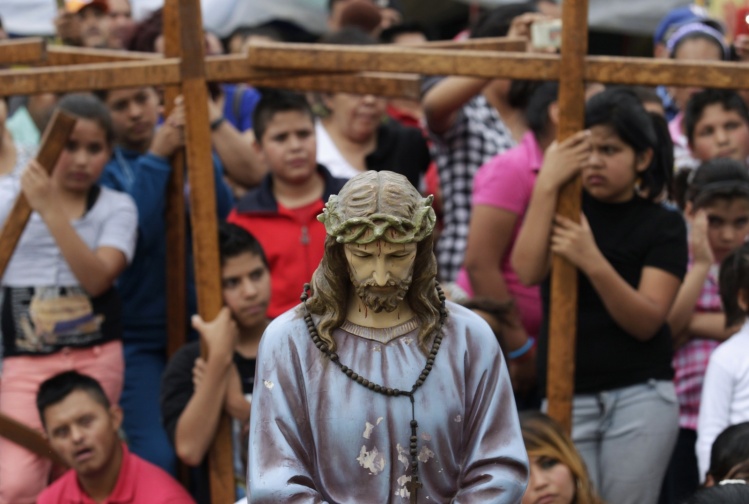 People hold crosses while standing behind a statue of Christ during a re-enactment of the Crucifixion near Monterrey, Mexico. (CNS photo/Daniel Becerril, Reuters)

Then were there two thieves crucified with him, one on the right hand, and another on the left.
(Matthew 27:38, King James Bible)

Two revolutionaries were crucified with him, one on his right and the other on his left.
(Matthew 27:38, New American Bible)

Reading the Passion according to St. Matthew on Palm Sunday, I was struck by my missal’s use of the New American Bible’s version of the text, in which the two men crucified along with Jesus are referred to as “revolutionaries.” I assume like most people I remember these men (who remain nameless in the gospels but in apocryphal tradition are called Dismas and Gestas) as “thieves” or “robbers.”

Call them revolutionaries and the story is transformed. The slippage of meaning in the various translations appears to follow a political struggle over the meaning of criminality across generations. Thieves, bandits, terrorists, freedom fighters, revolutionaries: so much depends on who is doing the labeling, and who is being labeled.

And what of those crimes committed in the context of oppression? British historian Eric Hobsbawm theorized upon “social banditry”:

Social bandits are peasant outlaws whom the lord and state regard as criminals, but who remain within peasant society, and are considered by their people as heroes, as champions, avengers, fighters for justice, perhaps even leaders of liberation, and in any case as men to be admired, helped, or supported.

Banditry was prevalent throughout the ancient Roman empire, and seen as a direct threat to the authority of the state—practically synonymous with seditious activity. And, much like in modern times, the state often painted organized revolutionaries as common criminals to delegitimize their cause.

That Dismas and Gestas were condemned to crucifixion alongside Christ underscores the gravity of their crimes. We do not know exactly what these were, but perhaps Dismas and Gestas are more like Christ than their traditional representation as thieves leads us to believe.

If we are presented with Dismas and Gestas as common criminals, we have a simple binary story of a sympathetic thief and an unsympathetic one. Dismas declares his faith in Christ (“Jesus, remember me when you come into your Kingdom”). Gestas mocks him along with the Good Friday crowd (“So you’re the Messiah, are you? Prove it by saving yourself—and us too, while you’re at it.”) Dismas goes on to fame as the “penitent thief” (and gets canonized) while Gestas presumably receives damnation as the “impenitent thief.”

Dismas seems to embrace the pain of the cross, and Gestas acts like a boorish unbeliever. But should we write Gestas off completely? He wasn’t exactly having an easy time of it, writhing up there alongside Jesus. Was he popping off because of the excruciating pain, bitter at his fate? Maybe he wasn’t up to speed on all the latest Good News from Jesus. But he too could well be a “thief” in the social sense, struggling to keep himself and his kin afloat under the crushing conditions of Roman rule. Jesus had profound sympathy for the oppressed, including those, as in the Beatitudes, who “hunger and thirst for justice,” those who are persecuted, those who are poor. At times some of these must push past the boundary of the law to survive—or to transform the conditions that make survival practically impossible.

Speaking of revolutionaries, wasn’t one of Jesus’ greatest offenses according to the law of his time having declared that he could level the temple and rebuild it in three days? Tearing down the old order and building a new one. A promise he fulfilled of course, beginning with the moment of his death on the cross. What could be more revolutionary than that?

Their story can also easily be reimagined in our times. Who is crucified, figuratively speaking, alongside Jesus today? Central American refugees (they whom Donald Trump refers to as savage criminals). Young black men gunned down by police. The legions of black and brown men and women languishing (and now made tragically vulnerable to the coronavirus) in our prisons, many of them for nonviolent offenses. How about a transgender former soldier who leaked documents to Wikileaks that revealed human-rights abuses by the U.S. military and languished in prison for years?

This week we are in the holiest of times for Judaism and Christianity, both of which feature narratives of oppression and liberation. We live in a time of tremendous vulnerability and grief. It is also a time of great solidarity and compassion. Stories of revolutionary hope come to us from all the great spiritual traditions. May they guide us through the darkness today.

Rubén Martínez is a writer, performer, and professor of English and Chicana/o Studies at Loyola Marymount University. 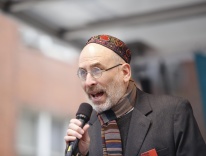